Richard Wagner chose to finish his Good Friday opera residing in Sicily’s Palermo, partaking of the splendors of its famed verdant basin, the Conca d’Oro. and reveling in the golden lights of its surreal Monreale cathedral.

Minimalist does not mean minimal resources. Foremost was the immense empty stage of an historic grand opera theater, the massive cut stones of its back wall strengthened by the architectural principles of ancient Rome. A huge and timeless space, the world and its humanity there to confront us when we entered the theater. The grand proscenium curtain then fell to create the dark, abstract space of the auditorium for the metaphysical musical world of Wagner’s prelude.

The stage and its platform, a giant, raked (upward sloping) space, again appeared on which we soon confronted Amfortas as the naked body of the crucified Jesus Christ, crowned by thorns (the fit and pale Christlike body of Iceland bass Tómas Tómasson). The exposed lighting sources and the half curtain used to mark the changes of scene were additional quotes of typical trademarks of Brechtian Epic Theatre that we were to behold. 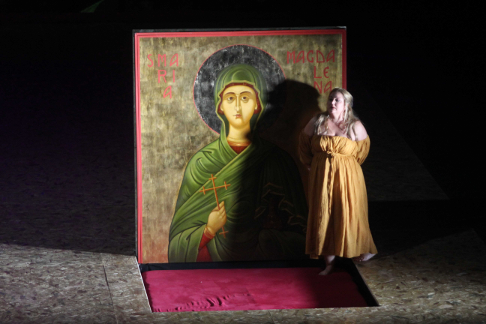 Catherine Hunold as Kundry with the seduction bed

While Graham Vick’s theater is indeed essentially Brechtian, respecting an aim to make us think and learn, it also confronts us with blatant humanity using startling costumes — the loin cloth, wounded nudity of Amfortas, the loin cloth wounded nudity of his antithesis Klingor (the fit and muscular body of German bass baritone Thomas Gazheli), the hijab covering of Kundry in the first act and the female chorus in the second act garden, the army fatigues and assault rifles of the knights of the grail, the pantsless knights of Klingsor’s sex obsessed kingdom.

Pure Brechtian theater rejects realism and its emotions but Graham Vick’s theater uses human bodies to create an intense sense of emotional space that heightens the realities we are forced to confront. His theater demands awesome numbers of human bodies to create these confrontations. Literally hundreds of bodies — a daunting demand fully met by the Teatro Massimo.

Of note in the Vick staging of Parsifal was the use of the half curtain as a shadow curtain in a direct quote of the silhouette processions that puppeteer William Kentridge often creates. The orchestral processions to the Holy Grail in the first and third acts were in Graham Vick’s world shadows of an endless line of a cruel and frivolous humanity marching across the vast stage expanse towards a meaningless grail. And yes, coup de théâtre, finally there was no grail at all! 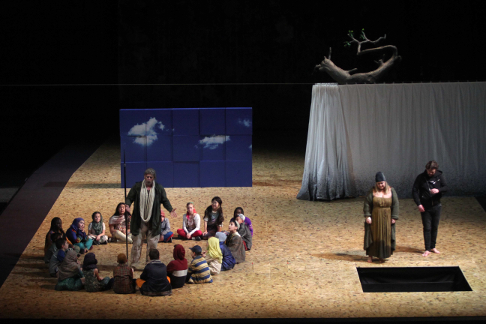 Gurnemanz among the children, Parsifal and Kundry

Cosima Wagner in her diaries quotes Wagner stating that Parsifal is “salvation to the savior” and the opera’s final music ascends towards somewhere for the more than five minutes of sublime orchestral music with offstage choir. But for Mr. Vick there there was no salvation of the savior — Amfortas had simply disappeared somewhere into the crowd.

The final tableau, in place of Wagner’s dove ascending to heaven while Amfortas and Kundry lay dead on the floor, was Parsifal sitting in the center of a circle of children wholesomely lecturing them about something profound while Kundry is beatifically standing nearby, liberated from Klingsorian aggression (a #MeToo moment), the impoverished knights of the grail now freed to pursue their personal destinies. One presumes that the throngs of humanity that populated Mr. Vick’s processions were now purified as well.

There were many electrifying moments to be sure, among them Amfortas digging out the buried grail (a tin cup), his blood falling into it to be drunk by the knights as they too mortified themselves. Kundry’s seduction of Parsifal held us entranced for its duration. And finally, astonishingly, as Parsifal baptized Kundry, a crowd of children were carried onto the stage holding huge building blocks (the voices of innocence that flooded the auditorium from time to time throughout the evening).

All this was a lot for maestro Amer Meir Wellber to hold together. But he succeeded in a reading that was absolutely straight forward, keeping to the tight timeline for each act that Richard Wagner had dictated (other conductors have loved to flaunt much slower times), thereby laying a solid foundation on which Graham Vick production might lay out his broader, social resolution. If the Italianate sound of the Teatro Massimo orchestra did not capture the philosophic raptures of the northern European spirit it did portray the enlivened spirit of the Mediterranean soul.

Among the many fine performances of the evening, some extraordinary (Tómas Tómasson as Amfortas and Thomas Gazheli as Klingsor), the magisterial Gurnemanz of Canadian bass baritone John Relyea stood out first as a young, emboldened knight, and finally as the old, wise voice of humanity. French soprano Catherine Hunold sang Mary Magdalene/Kundry in fine voice though without correspondence to a Wagnerian Venus.

The announced Parsifal of the production, Daniel Kirch, fell ill. His understudy Julian Hubbard stepped in for all six performances. Mr. Hubbard fully embodied Mr. Vick and Mo. Wellber’s Parsifal. If his fine, young voice served him exceedingly well for the first two acts, it did not possess the power and color to fulfill the heroic vocal demands of Wagner’s third act Parsifal.