After all, Beethoven was 19-years-old at the time of the storming of the
Bastille, and in 1805, when the composer first presented his three-act Leonore one would have needed to be politically illiterate not to
sense that an opera trumpeting such ideals would be associated with the
spirit, if not the historical actualities, of the Revolution.

Similarly, no one would challenge the suggestion that Fidelio has
dramaturgical, and generic, ‘issues’ that a director might seek to resolve
in their own way. The opera’s troubled evolution caused Beethoven considerable
labour and unrest, and the Fidelio that was performed in Vienna on
23rd May 1814 certainly didn’t solve the problems of the earlier three-act
(1805) and two-act (1806) Leonores which preceded it. Even after
eleven years and four different overtures, Beethoven was still lamenting
that the opera needed wholesale re-writing.

So, there is nothing surprising or objectionable about Tobias Kratzer’s
presentation, in this new production for the Royal Opera House, of Act 1 of Fidelio as a representation of a crucial juncture in the history
of political ideals and events. Blazoned upon the curtain-drop is the
Revolutionary motto, “LibertÈ, ÈgalitÈ, fraternitÈ”, against a
video-projection background of … well, us. Okay, leaving aside the matter
of whether the ROH stalls audience is a fitting emblem of Revolutionary
ideology, it’s perhaps not amiss to remind us that the upholding of such
values requires us to step up to the breach. And, it’s a reminder that is
slapped on with a trowel in Act 2. 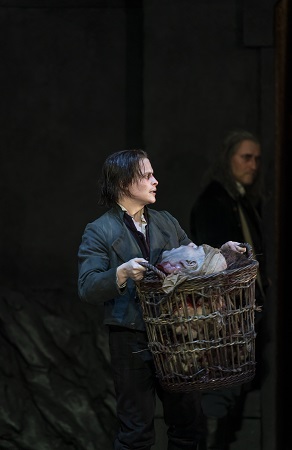 And, so, Act 1 unfolds with realistic Terror. No matter that the energetic
curtain-raiser overture that Beethoven finally plumped for after years of
compositional agonising has little of the musico-dramatic relevance and
impact of his preceding efforts. Kratzer uses it as a musical background to
head-rolling violence – literally, as a blood-dripping basket is heaved
into designer Rainer Sellmaier’s claustrophobic prison courtyard, for
bereaved widows to retrieve the guillotined heads of their rebellious,
truth-speaking husbands. When the prison warden’s daughter, Marzelline,
arrives bearing a wicker basket of laundry, the parallel is discomforting:
violent retribution is simply part of the day’s housework.

The comic domesticity of the opening scenes has been criticised for its
disjuncture with the heroic exploits and virtuous redemption which ensue.
Kratzer sets about trying to smooth over the schism – though the sliding
forth of Rocco’s private rooms surely presents some sight-line issues to
those seated on the right of the auditorium.

Though Rocco and Marzelline are descendants of eighteenth-century buffa, Kratzer underplays their obvious and comic self-interest:
such egoism would obstruct the heroic virtue that he is intent upon them
displaying subsequently. The first few numbers of Act 1 do not establish
the world of the ‘old regime’. The bickering of Marzelline and Jaquino is
unsettling rather than peevish, and the tension is tautened by Fidelio’s
incessant knocking at the door. Marzelline should be a foil for
Fidelio/Leonore’s virtue and constancy. Here, she is certainly not her
father’s daughter. And in any case, Rocco ‘Gold aria’ does not seem to
establish pecuniary self-interest as more important than his role as a
paterfamilias. 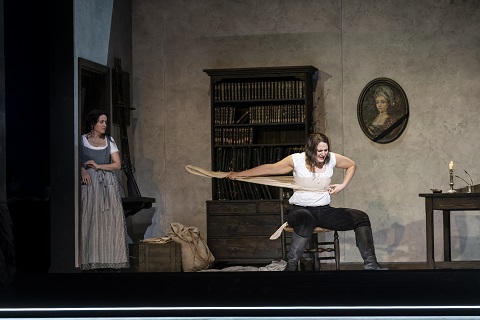 Proceedings begin to turn awry when Fidelio unwraps his/her
breast-swaddling and is espied by the disillusioned Marzelline. Surely, the
game is up? But, no, this Marzelline is inspired to her own heroic course
of action. There are other obstacles to dramatic fluency, not least the
over-loading of the spoken dialogue with text drawn from Beethoven’s
contemporaries Georg B¸chner (mainly from Danton’s Death) and
Franz Grillparzer.

At the end of Act 1, the descent to the dungeons, where Rocco and Fidelio
are to dig the grave of the prisoner prior to Pizarro’s arrival and
assassination of his nemesis, is in this production an ascent into the
light. That’s to say, the darkness is all within. Lighting Designer Michael
Bauer confronts us with a glaring whiteness. Brechtian alienation reigns.
The purpose of the blinding neon frame is revealed. At the start of Act 2
we find ourselves once again watching ‘ourselves’, this time in the form of
the ring of present-day, grey-suited spectators – seated in a council
chamber? or, drawing-room? – who stare at the shackled figure of Florestan,
prone upon a slate mound, their shocked, disgusted, self-castigating
expressions writ large in the back-wall video projections. 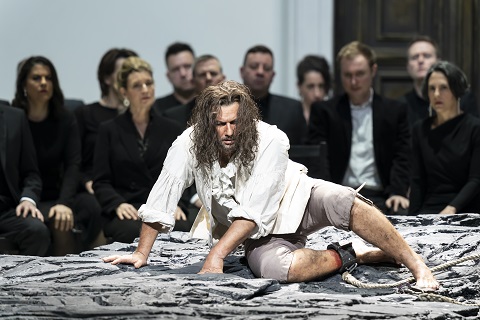 Dramaturg Bettina Bartz gives an account, sometimes persuasive, of the
directorial thinking, and suggests that in Act 2 Beethoven ‘depicts an
almost timeless space in which interpersonal and societal issues are played
out’. Well, one might say, there’s still a ‘rescue opera’ underway.
Watching the flinches and cringes – inspired as much by reluctantly
acknowledged guilt as by the physical stench and unsightly sores – as
Florestan thrusts himself towards his ‘audience’, as far as his shackles
allow, might well be as discomforting as intended. But, it’s also
distracting: do we want to be diverted by an onlooker surreptitiously
unwrapping and devouring a chocolate bar as Florestan confronts us with a
musical vision of man’s inhumanity and capacity for resistance, revolt and
redemption? Does this really tell us anything about ourselves, or about
Beethoven, or Fidelio?

Other directorial interventions in Act 2 are even more problematic. It is,
after all, conjugal fidelity which distinguishes Leonore from the
economically self-interested Marzelline. The opera’s virtue is reserved for
Florestan and Leonore: in an outburst of quasi-mystical religious ecstasy,
Florestan has an apparition of his wife as an angel, ‘Standing by my side
to comfort me … To lead me to freedom in the kingdom of Heaven’. The
synonymity of conjugal love with republican virtue is destroyed in this
production by Kratzer’s decision (spoiler alert) to make Marzelline the
agent of liberation. Leonore is denied the gun with which to forestall
Pizarro’s villainy: that role is assigned to the pistol-wielding,
trumpet-fanfaring Marzelline. 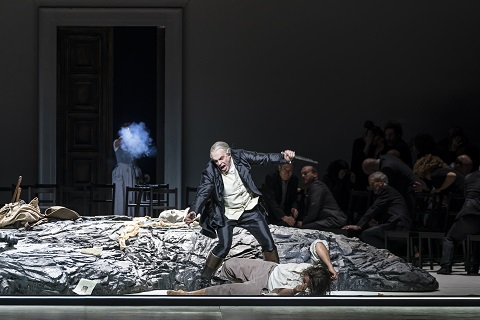 The arrival of Don Fernando to ‘save the day’ is one of the inherently
problematic aspects of Beethoven’s opera. The notion of an enlightened
deputy of an enlightened monarch serving as an abstract emissary
of republican light requires some side-stepping. Maynard Solomon,
one of Beethoven’s biographers, proposes a ‘solution’, observing that
Beethoven’s political views were formed in Bonn during the 1780s, when
under Elector Maximilian Franz ‘the ideas of the Enlightenment virtually
became the official principles of the Electorate’. Thus, Beethoven
subscribed to an ideal of reform from above – enlightened absolutism – by
which a ‘prince’ would lead his people towards freedom, brotherhood and
peace.

Kratzer opts for reform from below. Here, Don Fernando emerges from the
horse-shoe ring of spectators. Perhaps that’s not out of place in a ‘rescue
opera’ in which, conventionally, the resolution of political problems is
not effected by supernatural deus ex machina but by the real
actions by virtuous people. But, it does unbalance Beethoven’s
characterisation, which is founded on principles of the constancy of
identity, thereby depriving us of a counterpart to Pizarro’s
personification of villainy and aristocratic tyranny – excepting the
latter’s kindness to the black stallion upon which he arrives to deliver
his murderous instructions to Rocco in Act 1. 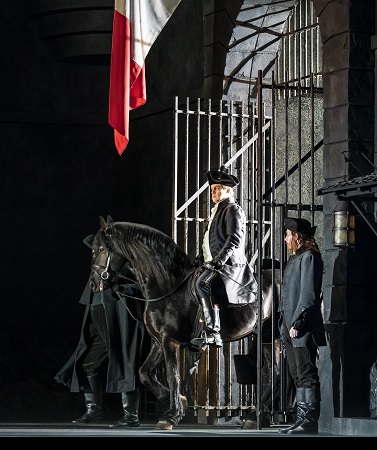 Thankfully, to counter such dramaturgical turbulence there was much fine
singing from the stellar cast. Though apologies were made in advance for
Jonas Kaufmann, who had not attended the final dress rehearsal due to ill
health, the tenor still managed to communicate Florestan’s rapture, and hit
those impossibly high climaxes; if ‘Gott! Welch’ Dunkel’ and the final
reconciliation with Leonore were in any way underwhelming the fault lay
with Kratzer who seemed to have offered little direction to his principals,
so occupied was he with rewriting the Fidelio rule book. When
Leonore released her husband – heralded by a beautiful oboe solo – in
addition to some awkward blocking there were music-word non sequiturs in their rapturous duet, ‘O namenlose Freude!’: ‘Now
I have you in my arms’ they may sing, but on this occasion Leonore and
Florestan were yards apart and looking in different directions.

Georg Zeppenfeld was an engaging and warm-toned Rocco, more compelling and
sympathetic than is sometimes the case with this role. Simon Neal was
Robespierre through-and-through but struggled with the stratospheric
demands that Beethoven requires of Pizarro. Amanda Forsythe was a
clear-toned Marzelline, but she didn’t have the weight to carry Kratzer’s
revisioning of the role. Similarly, Robin Tritschler’s Jaquino was vocally
secure but dramatically non-descript. As Don Fernando, Egils Sili?ö sang
with sincerity but struggled, not surprisingly, to make a dramatic impact.

The day was saved, appropriately, by Lise Davidsen who shone and soared as
Fidelio/Leonora. She has a vocal presence which absolutely compels. If only
she had not been, repeatedly, a microsecond behind the beat, creating a
sense of labouring when Leonore should fly. And, if only she’d been given
more directorial assistance by Kratzer, whose only instruction seemed to
have related to inappropriate unwrapping of Leonore’s chest bindings.

Antonio Pappano, conducting with a baton, unusually, was as insightful,
alert to detail, and empathetic as always, but even the sterling playing of
the ROH Orchestra could not overcome the directorial waywardness.

The prisoners’ chorus in Act 1 was magical but had no dramatic context in
Kratzer’s account. The final redemptive chorus – as the present-day
observers overwhelmed the upholders of the eighteenth-century state – which
draws, sometimes verbatim, on Beethoven’s Cantata on the Death of Emperor Joseph II, should have bestowed
order after the tumult of the prison scenes. Why did it not?

Well, Leonore may have triumphed with her ideals of hope, fidelity and
honour, but Pizarro’s knife glinted still. Picked up by the disgruntled,
unreconciled, alienated Jaquino, it seemed to create a crack in the opera’s
visionary armour. Perhaps Kratzer’s vision of Fidelio had finally
found a ‘truthful’ thread. In an 1998 essay, ‘Opera Opposed to Opera’,
which considered the relationship between CosÏ fan tutte and Fidelio, Edward Said remarks that, ‘Every affirmation … carries
with it its own negation, just as every memory of love and conjugal
fidelity also brings with it the danger and usually the actuality of
something that will cancel it, annul it, obliterate it.’ Wise, and sad,
words.