The premiere is at 8:30 PM, August 8, Central European Time (Rome), thus at 7:30 PM in London, at 2:30 PM in New York and at 11:30 AM in San Francisco. The premiere will be streamed from the Rossini Opera Festival website rossinioperafestival.it, as well as from ItaliaFestival.tv (it’s free to register) where it may be found for the following 48 hours.
The five, live performances take place in Pesaro’s Teatro Rossini. Built as the Teatro Nuovo in 1818 it was then inaugurated by Rossini conducting his La gazza ladra. Its classical Italian horseshoe shape has been retained through its many renovations and upgrades, the latest in 2002.
For this production the theater has been adapted to our new pandemic world. Each of the theater’s 95 (or so) boxes will hold but two patrons, the orchestra will be seated on the orchestra (parterre [in French] or platea [in Italian], the action said to be taking place on the stage. 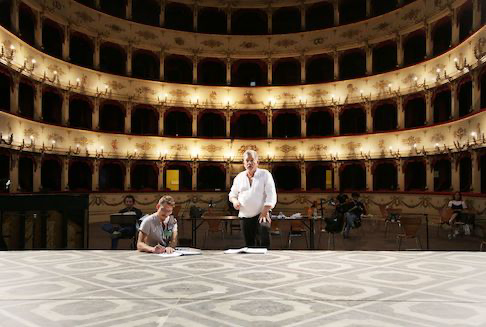 Stage director Laurence Dale with assistant in Teatro Rossini
La cambiale di matrimonio was last seen in Pesaro in 2006. This new 2020 production is staged by British Laurence Dale, once a singer, now a stage director, once the artistic director of Opera Africa, now artistic director of the Evian Festival. Designer Gary McCann has collaborated with stage director Dale for several productions at Holland’s Nederlandse Reisopera (aka the Dutch Touring Company).
Conductor Dmitry Korchak is well known to Pesaro audiences, having achieved considerable distinction as a singer in a number of baritenore roles. As well he has an active career as a conductor in Russia. In Pesaro he conducted Rossini’s Stabat Mater in 2016.
The cast is led by well-known buffo baritone Carlo Lepore as Mill, a shady London businessman who wants to marry his daughter to Snoot, a generous Canadian businessman sung by baritone Iurii Samoilov (a recent Billy Budd at the Bolshoi Opera). Mill’s daughter Fanni is sung by soprano Giuliana Gianfaldoni, who really loves the impoverished Edoardo, sung by Davide Giusti. Both young lovers are former participants in the Festival’s Accademia Rossiniana.
This youthful work premiered in 1810 when Rossini was only 18 years old, the first of his operas to be presented in a professional theater. Six years later Rossini reworked its first act duet into The Barber of Seville’s famed “Dunque io son” (the object of Lindoro’s affections).
There is a curtain raiser to Rossini’s brief farce. It is the 18 minute dramatic cantata†Giovanna d’Arco†that Rossini composed in 1832 for mezzo-soprano (Rossini’s last opera Guillaume Tell was composed in 1829). The cantata is four concert arias with piano, though here it is in an orchestral version by Salvatore Sciarrino performed by Pesaro’s Orchestra Sinfonica G. Rossini. The artist is Marianna Pizzolato who in 2010 enjoyed great success in the title role of Rossini’s biggest and best comedy,†La cenerentola.
For more information about the theaters used by Pesaro’s Rossini Opera Festival please see Two Summer Festivals That Can. Scroll down.
Michael Milenski