The Macerata Opera Festival celebrates its centenary season this year with the same opera that opened the first season of the festival in 1921: Verdi’s Aida. Summer opera in Macerata never fails to satisfy, largely due to the unique venue in which it is performed. The Sferisterio is a huge colonnaded outdoor amphitheater constructed of stone in the 19th century to house a now-extinct sport. It is located in Macerata, an ancient city deep in the Marches. While only a two-hour drive from touristed Tuscany, one meets few foreigners, even in a normal year. This year, I saw not one. The magic of hearing Italian opera under a night sky in a place seemingly so far from modern annoyances can hardly be found anywhere anymore – and it offers a unique opportunity to rethink even the most traditional of operas. 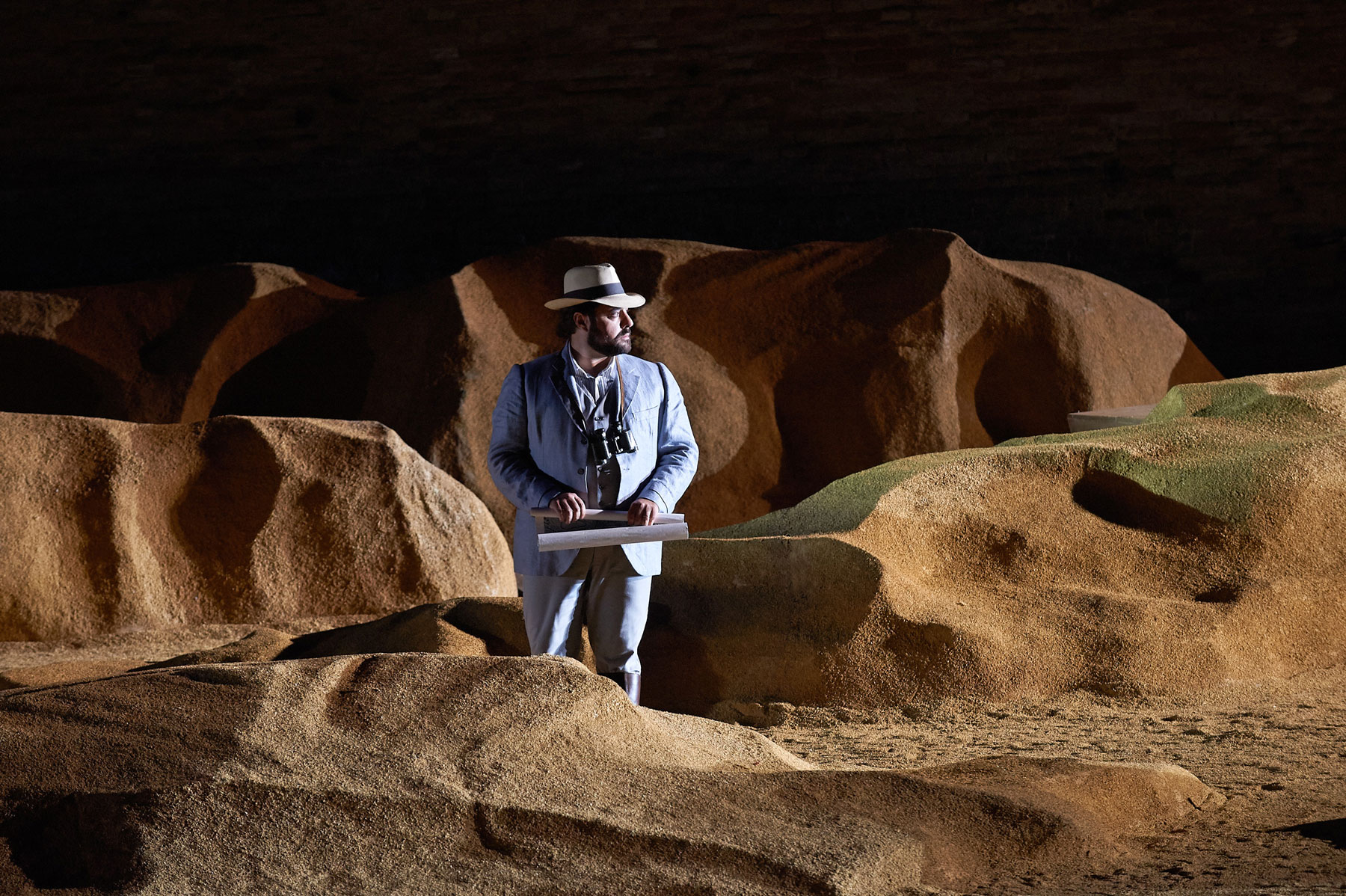 Opera critics these days typically begin reviews by discussing the philosophical concept behind a new production, often remarking on singing, music and even set design only as apparent afterthoughts. Italian critics who attended the recent Aida at the Macerata Opera Festival are no exception, spilling much ink parsing its post-colonial subtexts.

They need not have bothered. The major virtue of this production is that it has nothing at all novel to say about politics, society, or culture. Argentinian Director Valentina Carrasco resets the action to an indistinct time and place in the modern Middle East where Westernized local elites exploit oil revenues, Moslem fundamentalists promote religious orthodoxy, and a foreign underclass does the hard labor. At a conceptual level, this creates historical and stylistic chaos, leaving everyone on stage to speak and act as they would in a traditional production.

Traveling without intellectual baggage frees the directorial and design team to focus on something more important: the construction of memorable tableaus of sight and sound. Effective visuals and grand music are much of what Aida has always been about, but this production was especially evocative – perhaps reflecting the experience of both Carrasco and Set Designer Carles Berga working with the visually-driven Catalan theater group La Fura dels Baus.

The opera’s quiet prelude, for example, floats out over a stage filled by an empty desert of sand dunes – a scene of peaceful innocence beneath the starry sky of the Sferisterio. 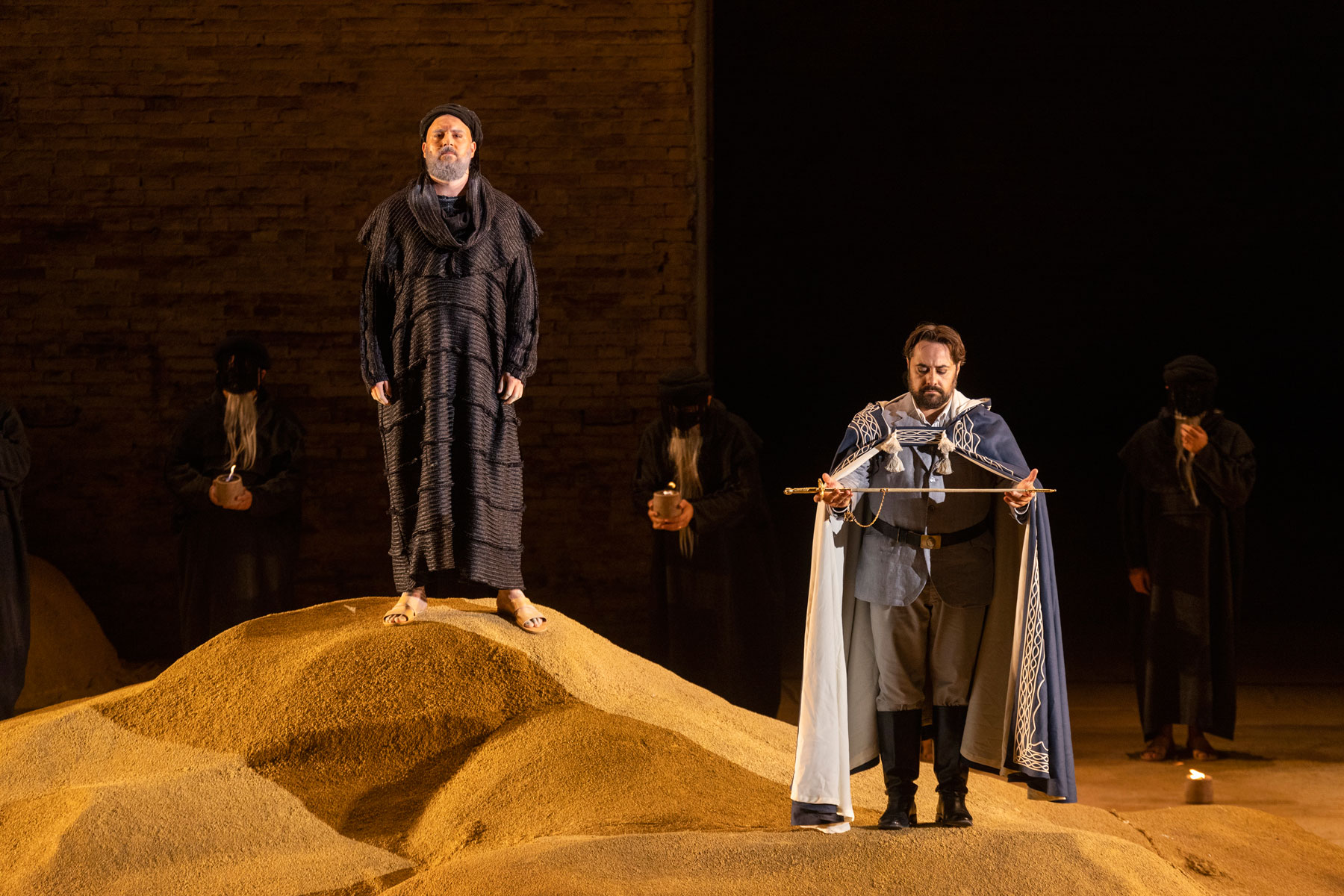 To evoke a temple, a single grand archway in the massive brick back wall of the arena is lit from within. A particularly tall sand dune serves as the ceremonial podium of the Egyptian King. The victory of the Egyptian elites in the Triumphal Scene is marked by the construction of an imposing oil pipeline, the various geometric parts forming an abstract design across the Sferisterio’s – in the end, becoming Aida and Radames’s tomb.

Against this minimalist setting, the production team creates magical moments of performance art. Dancers dressed in sand-colored burkas roll out of the desert like tumbleweeds and then undulated sensuously like desert spirits.

Fifty priests in black cassocks, turbans and masks enter slowly, each holding a small flame, singing softly – a visual and aural panorama surpassing wide-screen cinema. The construction of the oil pipeline (and some youthful antics with oil barrels), with a brass band to one side and trumpets ringing out from the colonnade, replaces the traditional Act II march and ballet, which generally only clutter the stage and impede the drama.

In the end, however, Aida must be sung. And Verdi singing today – especially by Italians – is not what it once was. Macerata heightens the challenge by seeking to cast young Italian singers who are just breaking out from provincial circuit. Hearing new voices can be fresh and exciting, but talented singers are scarce and often challenged by the spacious Sferisterio in which the management, to their credit, does not amplify the sound. 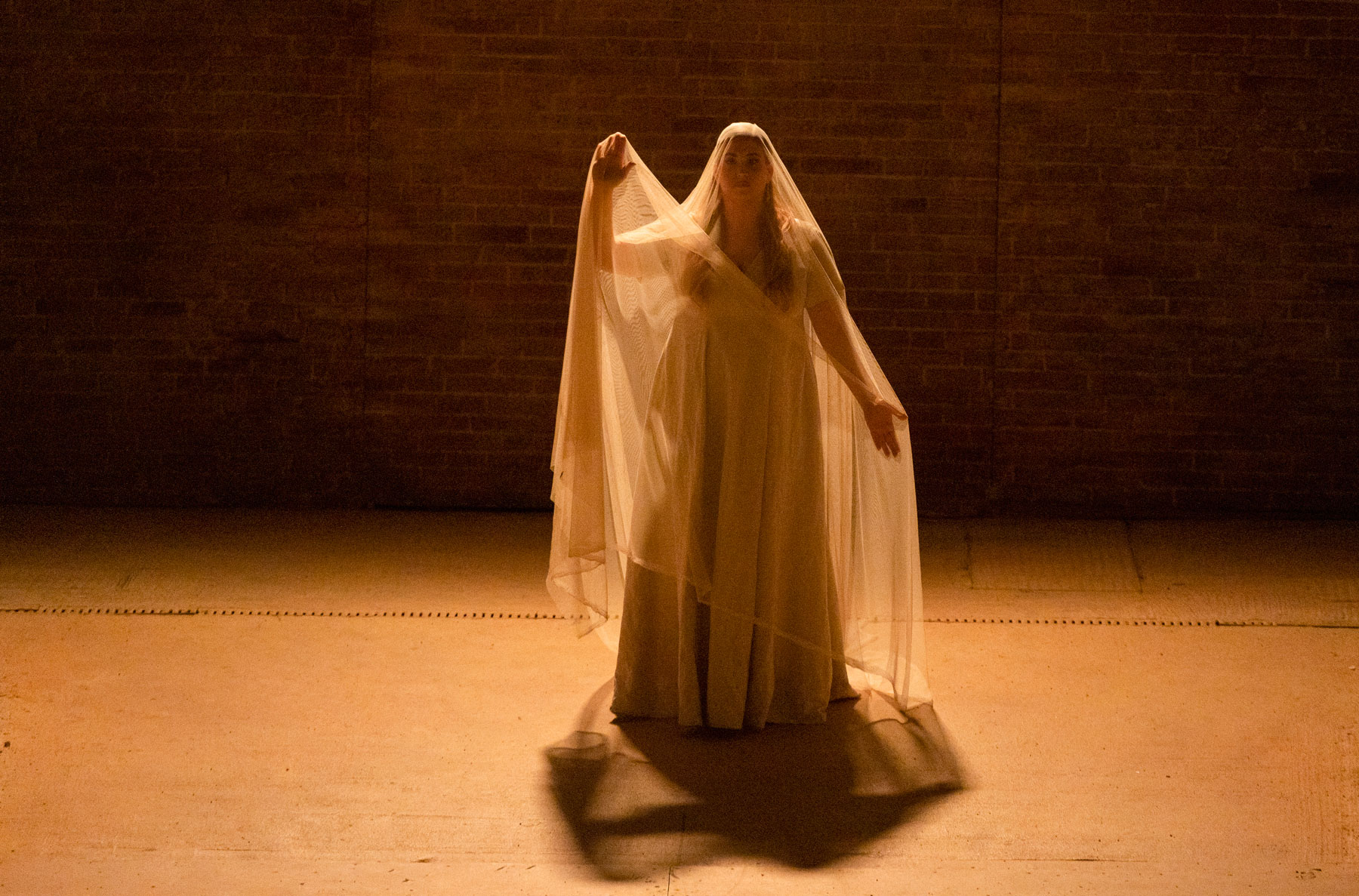 Nearly all the singers in this production have to push their voices to fill the space, with uneven and sometimes harsh results. Young soprano Maria Teresa Leva, a singer in her early 30s, has sung lighter roles in small houses. She brings direct and sympathetic emotionality to Aida, and she can project if needed. Yet she lacks the plush voice and technical smoothness of a true big-venue Verdi soprano. Similar challenges face Italian mezzo-soprano Veronica Simeoni – an experienced and accomplished singer with considerable technical finesse, dramatic presence, and musical intelligence. Yet she lacks the “force of nature” sound needed to tackle this role’s greatest moments – most notably the Judgment Scene, in which Amneris stands alone against the massed Egyptian patriarchy.

While not the tenore robusto one sometimes associates with the role of Radamès, Luciano Ganci spins soft and legato passages with uncommon beauty – and can belt out the occasional high note when required. The night we attended, however, he suffered a collapse of nerves midway though “Celeste Aida.” Two minutes of shortened phrases, hardened tone, and approximate pitch reminded one that singing this aria in the first minutes of a performance well may be one of the most difficult vocal feats in all of opera. Once through this trial, he sang well, sometimes memorably, for the rest of the night.

Bass Alessio Cacciamani approaches the role of Ramfis with considerable security, particularly down low, but struggles to project at the top of his range. More technically finished is Baritone Marco Caria, who brings to the role of Amonasro something resembling the dramatic thrust of a true Verdi baritone – marred only by a tendency to muffle the sound by turning away from the audience.

Two smaller roles receive standout performances. Bass Fabrizio Beggi portrays the King of Egypt. His voice is not exceptionally large, but it is technically firm and smooth top to bottom, ringing across the arena with clear and forceful diction. The only non-Italian in the production, Maritina Tampakopoulos – a recent Juilliard graduate from Greece, apparently still in her twenties – sings the nearly brief and nearly invisible role of the Temple Priestess with a full and plummy tone that leaves me wanting to hear her as a Verdi leading lady. Perhaps in twenty years, she may be the singer we remember best from this evening. 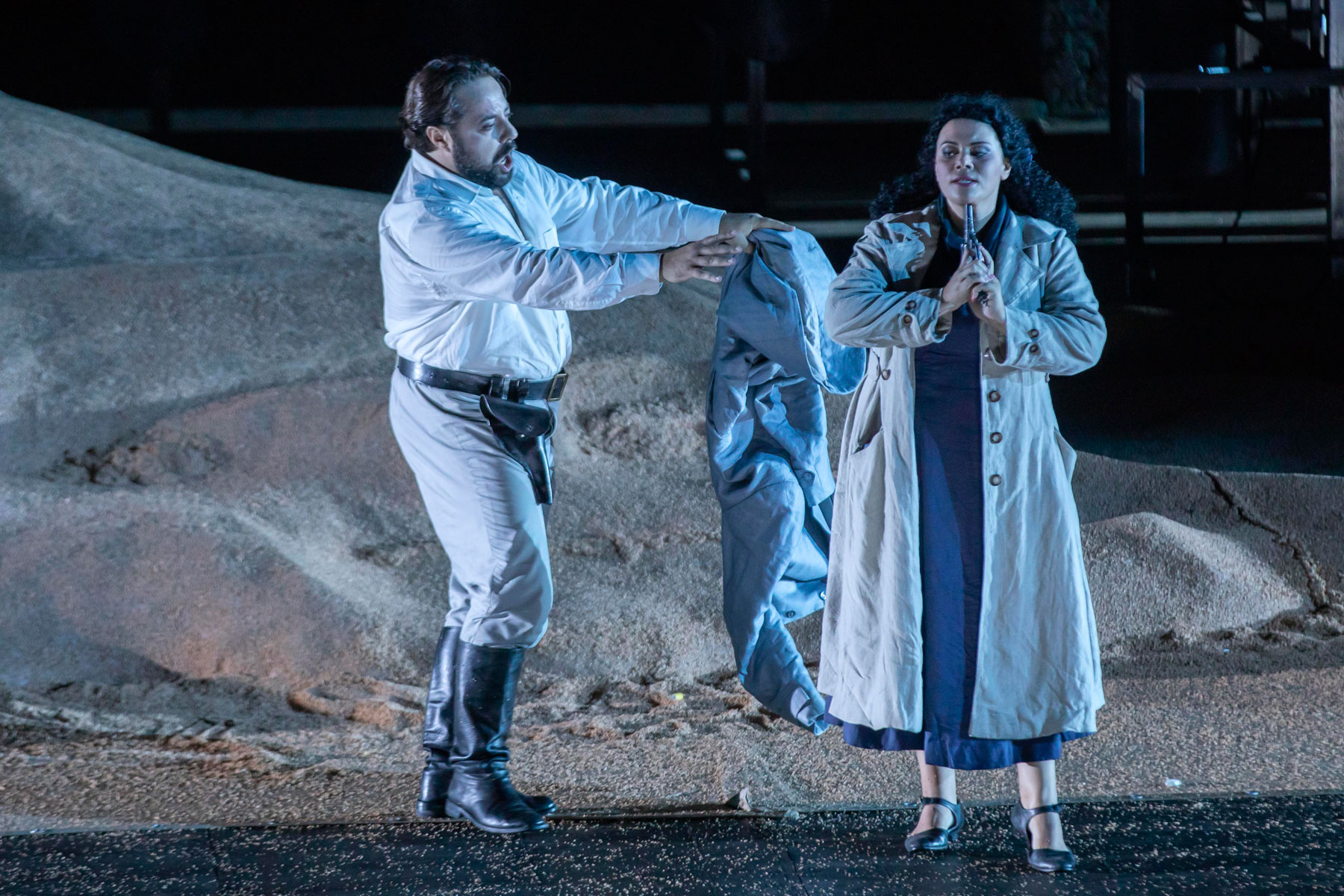 It is a major achievement for any conductor simply to direct traffic in this challenging space. Music director of the festival Francesco Lanzillotta does much more, leaning against the acoustic tendency of the massive venue by stressing transparency and subtlety in a score too often played for its bombast. Only very occasionally does he undermine forward momentum with mannerisms – for example, inserting sudden tempo changes in the Act Two Aida/Amneris duet. The chorus, advantaged by the acoustics and well-directed from the pit, sings splendidly.

One final note. Aida is, of course, about the inevitable conflict between private beliefs and public responsibilities. Real world events reminded me of this before the performance, for last Saturday was the first day of Italy’s new “green pass” COVID law. This law limits entry to restaurants, theaters, and other indoor spaces to those who can prove they are fully vaccinated. Walking across the Macerata’s central piazza, I encountered a small but vocal band of three dozen anti-vaccine protesters, egged on by two political organizers. When I reached Sferisterio, however, everyone efficiently and without apparent incident produced proof of vaccination, maintained social distance, and wore a mask (even outdoors on a hot night) – and the show nonetheless started on time. The immediate future of opera, and much that brings beauty and meaning to our lives, depends on all of us following this fine example.