Britten wrote this complex chamber opera after his large-scale masterpiece
ìPeter Grimesî and it could not be less alike, not only in scale, but in
the method of storytelling. For ìLucretiaî is a concept work from the
get-go, a tale of violent criminal sexual behavior in ancient Rome juxtaposed
with a narration and commentary characterized by Christian proselytizing from
a solo ìMale and Female Chorus,î one each.

Peripatetic baritone Dale Duesing, while still performing well himself,
has been venturing into stage direction in the early autumn of his vocal
career, and he has come up with a stunning solution in which to frame the
piece. He made the two ìChorusî soloists insidiously engaging
televangelists, and the clean and effective ìpureî white stage setting
(by Boris Kudlicka) their TV studio set. Indeed, the effect would not have
been out of place on the Praise the Lord Network.

Like a PTL pre-show, the ìministersî mingled with and greeted the real
life audience, and the rest of the cast/production team joined them onstage
for a prayer circle before the telecast began. A video cam was used
selectively throughout with telling effect, sometimes creating a TV show
atmosphere, sometimes manipulating its target worshipers with calculated
inspirational imagery, but often as not capturing characters in the cross
hairs of emotional flash points with a chilling freeze frame effect.

As the enactment of ìTarquiniusíî pre-meditated, unutterably evil
ravishment of ìLucretiaî unfolded (as played by the TV ìcastî), the
line between an elusive ìgoodî and faux piety began to blur inexorably.
It was soon hard to reconcile ugly reality with pious posturings, which
indeed initially reveled in re-telling this sordid tale as something merely
to be rather salaciously exploited for moralizing effect. As the whole
scenario careened out of anyoneís control it morphed into a profound
spiritual tragedy which would not be soothed away by empty religious
platitudes of convenience. When the ìmoralî televangelists are as
spiritually bankrupt as the godless ìTarquinius,î to whom does one turn
for succor? (Stop me if this sounds familiar. Jerry? Tammy Fay? Oral?)

This compact two-acter crams a lot of provocative imagery into its rather
short running time: The ravishment of innocence. Radical religious
pronouncements. Exploitation of power. Objectification of women. Political
one upsmanship at any cost. Mindless degradation of a perceived rival.
Military misdeeds. All this in a piece penned in 1956. Find any contemporary
resonance here? Letís see a show of hands. . . 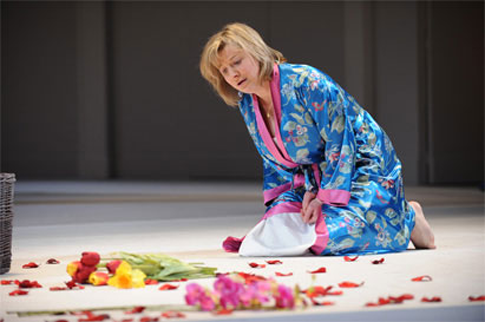 In addition to his shatteringly correct concept, Mr. Duesing not only
showed a refined skill for varied and meaningful blocking, but more
important, he coaxed highly individual and deeply internalized
characterizations from a uniformly excellent ensemble of singers, cast from
strength. A sure directorial hand infused the piece with a palpable tension
building to the titular act of uncommon menace, brutality, and
pre-meditation.

The largest ovation of the night was earned by baritone Andrew Ashwin for
a top notch reading of ìJunius.î This young performer, with his robust,
focused voice and a strapping presence, seems on the verge of a major career.
Simon Baileyís sympathetic demeanor and warm, burnished tone brought
dignity and compassion to ìCollatinus.î

The lovely young lyric soprano Krenare Gashi served Brittenís
high-flying leaps and turns with spot-on precision in a wholly engaging turn
as ìLucia.î She was matched in artistry and stage presence by the
plummier mezzo of Arlene Rolph as ìClaudia.î Their extended bucolic duet
scene ìthe morning afterî was immaculately voiced. Nathaniel Webster was
a fine ìTarquinius,î and not of the mere ìeye candyî variety that
other recent star singers have brought to the part. Mr. Webster not only sang
with force and beauty throughout, but he can also color and declaim his
threats with a biting urgency, and even sexual huskiness. His uninhibited,
disrobed physicalization of ìthe deedî was powerful stagecraft.

As the ìChorus,î Anja Fidelia Ulrich and, especially, Peter Marsh were
frighteningly focused on their ìmission,î as grinning disingenuous money
lenders who needed to be driven from the temple. (Whereís a Messiah when
you need one?) Although I have always found the ìFemale Chorusî to be
less interesting musically, Ms. Ulrich certainly sang it well, and found
plenty to work with dramatically as her character arguably became the most
sympathetic onlooker in the the tragedy. Only she appeared to realize what
they, and God had wrought in setting this tale in motion. Mr. Marsh seemed
born to sing his role. Part snake oil salesman, part brain-washed believer,
his characterization was disturbingly well-rounded, and as well sung as you
are likely to hear.

That leaves our heroine, and Claudia Mahnke created a noble heroic figure,
pitying and pitiable, strong-willed yet accepting of her fate in a way
similar to the young wife in the recent film ìNo Country for Old Men.î
Confronted with consummate evil, she knows why ìTarquiniusî is there, and
is helplessly doomed to be his prey. Whether singing full tilt or scaling
down to a whisper, this splendid house mezzo deployed her smoky-hued voice to
full effect in sculpting a multi-faceted portrayal. Her defiled appearance
before her husband in purple gown (just one of Nicky Shawís excellent
costumes), and subsequent slitting of her wrists ending in a bloody death on
the flower-strewn, lit white steps in a crucifixion pose, was just one more
chilling image in an evening filled with visual artistry.

The chamber orchestra under Maurizio Barbacini could hardly have been
bettered. Soloists all, they relished their individual moments as
virtuosically as they essayed the concerted ensemble efforts. Brittenís
harp effects always strike me afresh as magical calculations, and his
masterful scoring was well served by the skilled Frankfurt
instrumentalists. 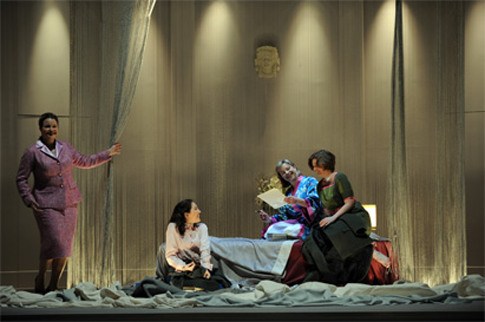 As true testament to the success of ìThe Rape of Lucretia,î not only
were there waiting lines for ticket returns for each show (for ìLucretiaî
of all things!), but I cannot remember the last time I was a member of an
audience that was so still, so engaged, so attentive to every phrase, every
musical utterance. Honestly, the promise of thrilling evenings like these is
why I continue to go to the opera.

Suffice it to say if this is an example of Dale Duesingís directorial
skill, I may have to become a groupie. And Frankfurt should seriously
consider reviving this splendid production, a triumph for all concerned.
Bravi tutti!