Shall we say naive resolution. After all the complexly human trilogy is yet to come, and the Magic Flute will be just that — a fantasy. So let Abduction’s Pasha forgive and forget, and don’t argue with operatic idealism. This new production of Mozart’s first operatic masterpiece forgets any and all intriguing political or dramatic contexts. It merely frames this simplistic singspiel as a work of art to be admired, like a late 18th century painting in a museum.
Metteur en scËne Alfredo Arias and scenographer Roberto PlatÈ, both Argentine, used a huge gilded frame as the back drop, framing only sky because it was the ceiling of a grand old room turned on its side (the floor of the stage had some windows as did the stage ceiling). The why of this witty perspective seems to be just because.
French high fashion designer Adeline AndrÈ abstracted early twentieth century shapes for the very witty costumes (Osmin, the Pasha’s chauffeur with greatly exaggerated glove cuffs, Pedrillo in a bright green shirt with a black leather bistro apron, Konstanze in light blue high 40’s design pumps as prime examples). Mozart’s six principals spent most of the time on the fore stage, sometimes wrapping themselves in the OpÈra Comedie’s red velvet house curtain, sometimes in front of or behind a painted scrim that echoed the framed sky and flew in and out now and again.
Of course the staging was not nonsense any more than Mozart’s singspiel is nonsense. The 25 year-old Mozart simply exploded musically. The explosion happened in the pit. About 30 players from the Orchestre National de Montpellier formed the absolutely splendid pit ensemble, the wooden mallets on the period tympani used for this occasion defined the musical grit and edge. The pizzicato strings of Pedrillo’s Romance, in fact the whole of this extended scene, sounded with nearly boom box resonance. The architecturally magnificent 1200 seat OpÈra ComÈdie burst with musical magnificence.
Hungarian conductor Bal·zs Kocs·r was the musical force, never overwhelming the naive joy of Mozart’s little opera with his own or Mozart’s self importance, finding instead a rhythmic release and musical elaboration that told of the young composer’s newly found independence — from a tyrannical patron and a smothering father — and the young composer’s discovery of love — for first Aloysia and then Constanze Weber. Joyous excitement that Mo. Kocs·r made flow from the pit in intense, always lyric tempos.
Vocal explosion happened on the stage when German soprano Cornelia GÙtz brought the energy and furious excitement of Mozart’s future Queen of the Night to the headstrong Konstanze, imposing her prodigious vocal technique on what is surely Mozart’s most demanding role, and making it vocally vivid and dramatically real. Mozart’s famous show stopper “Martern aller Arten” was far more than a virtuoso feat, it was gigantic emotional release. 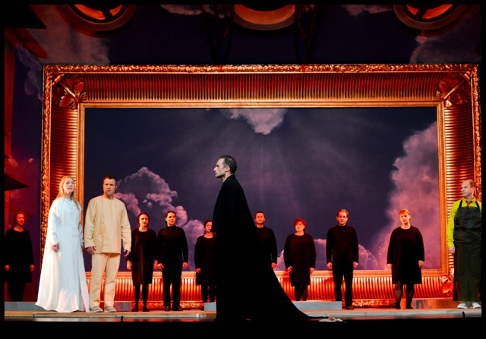 It was sublime music making indeed when this maestro joined this soprano to discover the happiness that Mozart exudes in his first Viennese years.
Metteur en scËne Arias provided dramatically abstract staging, stage movement based on musical phrase rather than story telling illustration. All movement was choreographed, an aria about or influenced by another character was always sung in the physical presence of that character. Mozart’s gigantic Act II quartet “Ach, Belmonte, Ach, mein leben” was rendered in purely formal geometric shapes, rigidly symmetrical. Choristers in the Act I finale construed themselves in a formal pattern on the stage dressed in concert blacks. Mr. Arias staged which is to say choreographed every last second of music. It was effective when it was not tiresome.
Czech bass Jan Stava made chauffeur liveried Osmin a charming, positive presence with just a hint of menace. Stage director Arias‘ choreography allowed none of the classic schtick. The young bass attacked his mindboggling “O, wie will ich triumphieren” with confident bravado and succeeded as well as anyone with its coloratura and range challenges.
American tenor Jeff Martin as Pedrillo exemplified the arbitrary casting possible in this mise en scËne, musically rather than character driven. In this witty casting it was not the usual ingÈnu Pedrillo, Mr. Martin these days sings Wagner’s Mime here and there, plus Rosenkavalier’s Valzacchi at the Bolshoi! Pedrillo’s complications to Mozart’s silly story were therefore a bit less naive and a lot less romantic and a far more structural. The same may be said of the Blonde sung by Norwegian soprano Trine Wilsberg Lund.
Mlle. Lund however did not achieve the elegant lyricism that the maestro afforded his singers, never quite capturing the beat of his lyric flow. On the other hand American tenor Wesley Rogers as Belmonte did sing musically, and nearly mastered the spirit of the stage movement. After an impressive start he seemed very tired by the third act, understandable as the vocal demands of the role are considerable.
And finally Pacha Selim exploded, as musically as if there had been music [his lines are spoken]. Swiss actor Markus Merz let it rip in hochdeutsch. There had been mercifully little dialogue, with the obvious frustration that the spoken German was not a language most of us understood. When Mr. Merz had his moment he made it compete as best he could with some of the world’s most joyful music.
Michael Milenski