This past weekend West Edge Opera formerly known known as Berkeley Opera took a bold step, moving off the stage of a suburban East Bay high-school onto the 400 seat, Berkeley Repertory Theatre Thrust Stage for two semi-staged performances of Samuel Barber’s Vanessa. Berkeley Rep is a prestigious address, after all its productions sit at the forefront of American regional theater. The spectacular new East Span of the SF-Oakland Bay Bridge somehow adds a panache to Berkeley that the funky, dangerous old Bay Bridge excluded. Expectations were high, promise was and is in the air.
This past weekend as well saw the last of six performances of Mozart’s Don Giovanni in the 250-seat black box theater of Hidden Valley, an institute for the performing arts in Carmel Valley (2 1/2 hours south of San Francisco) that has come back to producing opera now that a degree of prosperity has returned to the Monterey Peninsula. Its Opera Ensemble founded in 1974 offers young singers an opportunity to take initial steps into professional producing circumstances. Overseeing this current Don Giovanni were conductor Stewart Robertson, Music Director Emeritus of Glimmerglass Opera and veteran stage director/designer Robert Darling.
The common artistic ground held by the two productions was opera as theater, not opera as opera.
On Berkeley Rep’s blackened Thrust Stage a 30 piece orchestra sat upstage, two chairs and a table were downstage and the singers performed within a few inches of the three-quarters surround audience. The conductor was visible to the singers only by television monitor. At Hidden Valley it was opera in the round, a 9 piece ensemble (including harpsichord) sat off in a corner, TV monitors offered the conductor’s beat, the stage itself was a small asymmetrical platform in the center of the space surrounded by audience.
Common also were the much, much reduced orchestrations. While the brass and woodwind complement of Vanessa was somewhat intact the strings were limited to twelve players total (there were forty five or so at the opera’s premiere). The Don Giovanni orchestra became a string quintet, plus a flute, oboe, and bassoon (the three woodwinds total were reduced from the fifteen brass and woodwind instruments of Mozart’s score).
Not exactly Wagner’s gesamtkunstwerk, and it really did not matter as the immediacy of voice, the urgency of action, the physical presence of character created a powerful dimension of theater — a dimension that is so often and so easily overwhelmed by opera’s complexities. 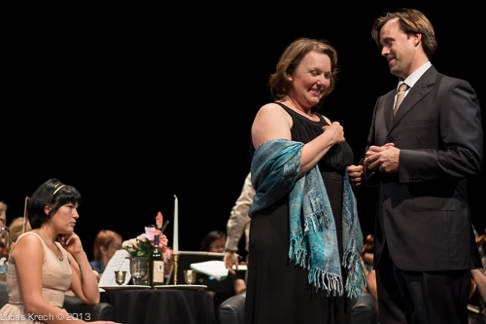 Nikola Printz as Erika, Marie Plette as Vanessa, Jonathan Boyd as Anatol [Photo by Lucas Krech]
The theatrical dimension was very present in Berkeley. Vanessa was about aging soprano Marie Plette and her shallow young tenor lover Anatol, Jonathan Boyd. Innocent if weird young Erika, San Francisco Conservatory graduate soprano Nikola Printz simply wanted real love whatever that is, and dumbly wise bass Phillip Skinner was the Doctor who even knew how vapid he was. Not to forget the grandmotherly Baroness, Malin Fritz who sang very little but looked very stern. Very believable characters indeed, who were also quite real singers and very good artists. Even the staging was their own (there was no stage director), and seemed completely true to character — how could it have been otherwise.
Barber’s Vanessa itself sat very comfortably in the chamber format. The coy libretto by Barber’s life partner Gian Carlo Menotti is like a short story that resolves into a clever play on words much more so than it is a complex human situation that might end in tragedy. The chamber format imposed by the small theater responded to the wit and fun that permeates Barber’s music, and revealed his brilliance as a composer of mid-century complexities — like the splendid quintet that winds up Vanessa. And as a composer of occasional pieces, like the well known arias and duets that embellish the action.
In this reduced orchestral and sceneless format the specific colors and tones of Barber’s quite pictorial music and the atmospheres inherent to Menotti’s little twilight zone story are sacrificed. But the chamber format did ring true as the perfect place to bare the soul of this wonderful artifact of mid-twentieth century American music. The proceedings were held together by West Edge Opera music director Jonathan Khuner.
Hidden Valley has had much practice staging in the round, achieving in this Don Giovanni a degree of perfection. The irregular shape of the small center platform provided places to step, to sit and to hide, and it was turned from time to time by three very, that is very shapely damsels in black vinyl body stockings to indicate a change of scene, or rotated sometimes to make a posed stage picture visible to the entire audience. The entrance/exit aisle bisecting the theater was used for staging, the intersecting aisle axis led to platforms high against the side walls where Elvira appeared on her balcony and later the Commendatore’s statue loomed.
And there was production — minimalist lighting by designer Matthew Antaky sketched a few atmospheres, plus when those sexy stagehands threw a red rope net over the Don and drew him into hell a bit of smoke billowed from under the central platform. All this while the eight players in the pit gave it there all. And it was absolutely enough for the circumstances, probably because we were right in the middle of it. 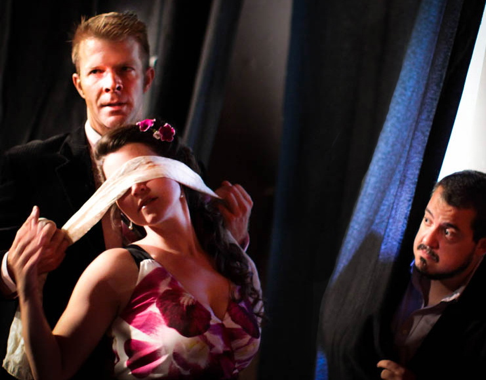 Gregory Gerbrandt as Don Giovanni, Anna Noggle as Donna Elvira, Igor Vieira as Leporello [Photo by Tiffany Velasquez-Walker]
Sitting in such close proximity to six fine young singers showing their stuff was a very great pleasure. While Don Giovanni himself seems to have the least to sing in the opera he must create a powerful presence to give reason for everyone else to sing a lot. Baritone Gregory Gerbrandt had the voice, charisma and physical stature to set off the vocal fireworks blazingly exhibited by Donna Anna sung by soprano Jennifer Jakob, Donna Elvira sung by soprano Anna Noggle, and particularly Don Ottavio sung by tenor Zachary Engle. Mezzo soprano Nora Graham-Smith as Zerlina has a vocally warm presence that was appreciated in the ensembles, and baritone Ryan Bradford brought touching boyish naivetÈ to Masetto. Brazilian baritone Igor Vieira had the hint of accent and the bad-boy instinct (he often ignored the beat) to make him a truly believable Leporello. Veteran (i.e. old) bass Art Schuller was a very intimidating Commendatore.
This young cast could not plumb the depths of Don Giovanni, after all the Don himself needs a bit of age to have created the catalog that Leporello thumbed through on his iPad. Stage director Robert Darling therefore took the libretto and music at face value, embellishing the story just enough to provide some staging interest, like for example the Commendatore exchanging pistol shots with Don Giovanni, wounding the Don. It was enough that the staging was a vehicle for young singers to explore their voices and hone their acting skills.
Conductor Stewart Robertson presided from afar, providing a reasonable musical basis on which these young artists could build commanding performances of some of opera’s most known and beloved music. This maestro made the singers shine at the expense of exploiting the orchestral dramas of the Mozart score — after all he had but a flute, oboe and bassoon, plus the string quintet who surely found new meaning for the word exhaustion.
Michael Milenski