It is an astonishing score embodying a libretto of unequaled brilliance. It proves Verdi the veritable progeny of Rossini, able to infuse comedy with an explosive energy that holds you at the moment you would burst were you not held safe by great art.
Falstaff is the ultimate ensemble piece bringing together ten voices of nearly equal dramatic force, interweaving them so tightly that only brief if very intense instances of lyric expansion linger. Though there are two much larger moments which well endure — Ford at the end of the second act explodes in an extended fit of rabid jealousy of his wife Alice (and its flip side, his obsessive fear of cuckoldry), and Fenton in the moonlight of the final scene cannot contain his raptures of love for Ford’s daughter Nanetta whom he is obsessively courting.
At the center of Falstaff is the gigantic elaboration on the follies of love, and those are the appetites of Sir John Falstaff. His appetite for roasted chickens and stewed rabbits and casks of wine have promoted the impressive girth that simply defines the magnitude of his appetite for women. Nor is he particularly selective about which woman as it turns out.
The action moves so fast that the opera seemed to stage itself. This was the triumph of this San Francisco Opera production, the myriad of dramatic complexities were tightly contained mostly within the hole left when Falstaff erupted through the floor of the abstracted Elizabethan theater that sat on the War Memorial stage. After all, this Verdi Falstaff is an interloper into the Shakespearian histories (four plays) of Sir John’s adventures. 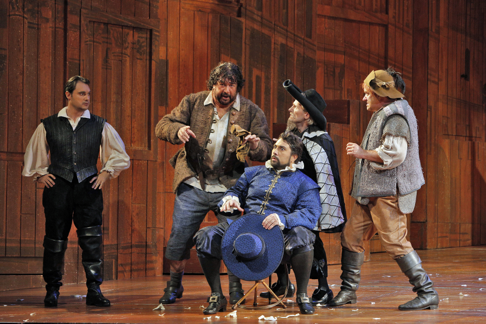 Francesco Demuro as Fenton, Andrea Silvestrelli as Pistola, Fabio Capitanucci as Ford, Joel Sorensen as Dr. Caiua, Greg Fedderly as Bardolfo
Austrian stage director Olivier Tambosi was joined by two associate directors, Jose Maria Condemi and Stephanie Smith to make the action move in precise concert with Verdi’s score where no action can be imagined that does not already have musical definition. Certainly this was a daunting task. And there are the constraints of conforming to the needs of the maestro who likes the action downstage center where the singers are under his direct control, not to mention the big (seven to ten voices) ensembles of daunting complexity where the singers need to find their way into a line across the front of the stage in order to musically survive.
The complex set, a fifteen year old production from Lyric Opera of Chicago, staged then (and now) by Tambosi was designed by Frank Philipp Schlˆssmann, which team is known to San Francisco Opera audiences for its 2010 Makropulis Case. The set offers many hidden openings in its massive wooden walls, Fenton could appear here and there like an annoying housefly. When it became Ford’s house his henchmen could ransack its upper hallways, and finally its back walls disappeared completely to reveal Windsor Forest.
Conductor Nicola Luisotti mercilessly taunted Falstaff with choruses of horns, and mercilessly rubbed in the double entendre in by placing the Herne’s Oak horn call from a box in the opera house (blown by the orchestra’s costumed principal horn). The already high-voltage of the octogenarian composer’s score was poised on the edge of explosion, holding us enraptured by the solo winds making fun of everyone on stage, the piccolo hinting at the pain. This was Luisotti at his absolute finest, making this remarkable score conjure up the genius of Shakespeare himself to join in Verdi’s roast of his delusional knight.
It was an impeccable cast. Welsh baritone Bryn Terfel as Falstaff anchored these dramas of the wily women of Windsor making fun of lovesick men. The Tambosi/Terfel Falstaff is not a lovable version of the man, it is a more blatant, uncomfortable take on the mythical knight than a sympathetic portrayal. Terfel has now had decades of experience with the role and has surely mastered all its possible moves. At 48 years of age he has no lack of power, stamina or subtlety to create the crimson colored monster of this production. 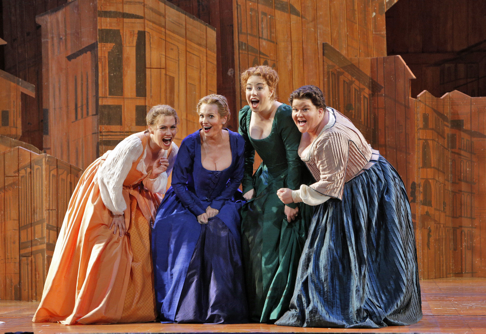 Heidi Stober as Nanetta, Ainhoa Areta as Alice Ford, RenÈe Rapier as Meg Page, Meredith Arwady as Dame Quickly
If Terfel’s performance towered about all the rest it was to validate his character as the name of the opera. The balance of the cast worked very much as an ensemble and did not burden us with stars attempting to fit into a complex dramatic mechanism. Italian baritone Fabio Capitanucci made Ford vulnerable, sly and twisted, his instinctual Italianate fear of the horns palpable. Italian tenor Francesco Demuro as Fenton delivered a stunning “Dal labbro il canto estasÔato vola,” reveling in the rolled “r”’s of his native language.
Spanish soprano Ainhoa Areta brought charm and plenty of voice to Alice Ford, finding the fun of the character rather than the authority. American coloratura soprano Heidi Stober was a fine looking Nanetta, beautifully paired to her Fenton though she did not have the innocence of voice to create the magic of Windsor Forest (she sings the more complex Mozart and bel canto heroines). Adler Fellow mezzo-soprano RenÈe Rapier held her own as Meg Page.
If Bryn Terfel met his match anywhere in this cast it was American contralto Meredith Arwady whose force of personality, force of voice, inherent sense of comedy attained veritable Falstaffian proportions. Of near Falstaffian proportions as well were the Dr. Caius of Joel Sorensen, the Bardolfo of Greg Fedderly and the Pistola of Andrea Silvestrelli, more believable Shakespearian rogues could not possibly be found anywhere nor could more accomplished character artists.
Michael Milenski