The Calixto Bieito Carmen is old news, this edition having already taken place in Barcelona, Venice and Torino, though a Bieito Carmen has been around on advanced European operatic stages since 1999. It was never headline news, finding instead this extraordinary stage director in a rather subdued state. Yes, there was fellatio, pissing, nudity, gang rape, child abuse and true brutality. Yes, Mercedes was Lilas Pastia’s middle-aged wife, and yes, Don Jose was really annoyed by an insistent MicaÎla who sang her pretty song and then gave Carmen the “up-yours.”
Bieito creates a world that puts you on edge, here it was Spain with the cut-out bulls on the hilltops, gypsies in dilapidated cars, freaked out youth, blinding beaches and lurid tourism, and of course bull rings. But finally Bieito’s bull ring was only a chalk-line circle laid down by Lilas Pastia in which the raw power of Carmen’s indifference was pitted against the impotent supplications of Jose. Murdered, Jose dragged Carmen out of the circle — like a dead bull.
Movement is violent and often sudden in this and all Bieito worlds. There were very limited moments of dialogue but many additions of crowd noise and shouts, and punctuations of imposed silence broken by frenetic crowd clamor. The quintet was splendidly staged catching the lightening speed of the music in fast, demonstrative movement, and the trio was deadpan, the cards read on the hood of a car with no sense of doom, Carmen indifferent to her fate. 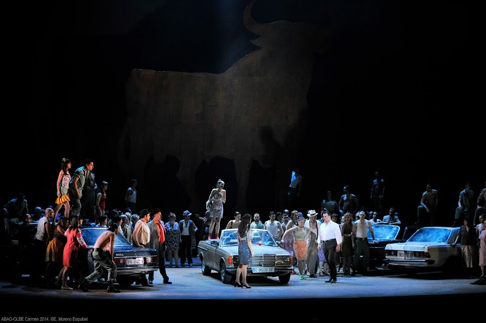 Act III. Escamillo in white shirt. Photo by E. Moreno Esquibel
There was no set. A simple cyclorama against which there was first a flag pole and a phone booth, then a car and a Christmas tree, then eight cars and a gigantic cut out bull and finally nothing except a beach with a marked out chalk ring.
All this might seem a recipe for a dynamite Carmen, but this does not seem to be Bieito’s intention. This tale of Jose’s infatuation disappeared into this cosmos of marginal life in Spain and became unimportant, its emotions melted into the morass of a much bigger and equally violent, emotionally raw world.
With some setbacks along the way Bilbao’s Amigos de la ”pera managed a cast responsive to the needs of both Bizet and Bieito. The Carmen announced in the publicity was Sonia Ganassi who withdrew because of illness, young Italian mezzo Giuseppina Piunti came to replace her. However she could not do this second performance (of five) thus this performance fell to the cover Carmen. Ana Ibarra is a young Spanish artist, not a Carmen by nature or physique but a very fine singer, and with obviously limited rehearsal attention she still gave a quite credible performance, greatly appreciated by the audience. 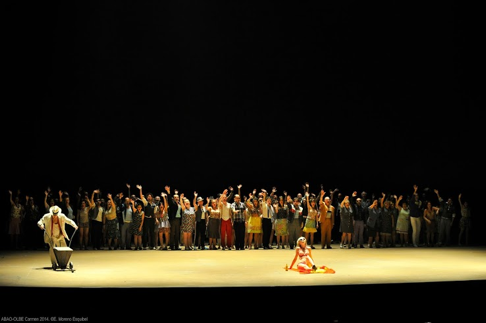 Lilas Pastia marking bull ring circle and sunbather. Photo by E. Moreno Esquibel
Venezuelan tenor Aquiles Machado is in his vocal prime, and gave a beautifully sung performance. His Flower Song was the hit of the evening, the high notes squarely placed and exciting. Mr. Machado projects an affecting presence, and could perhaps be a moving Jose in a heated or even warmer production. Quick on his feet he was able to have a real looking knife fight with Escamillo, leaping from roof to roof of a line of cars. He was equaled in agility by seasoned Spanish baritone Carlos Alvaro! This esteemed singer brought a sharp Italianate edge to the role, making Escamillo a powerful and dangerous presence with real bullfighter voiced coglioni if not with physique or stance.
MicaÎla was sung by Valencia born soprano Maite Alberola who brought a brightness of voice that has made her a fine traviata though she did not move with a natural agility in the wonderfully tacky clothing that was her costume. With the resources of a traviata voice (a brilliant top and a warm middle voice) she found unusual and very welcome vocal excitement in her aria.
French maestro Jean Yves Ossonce provided a generally idiomatic reading, giving the principals solid understanding for their arias — a faster than usual “Je dis,” a louder than usual “La fleur que tu m’avais jetÈe,” as examples. The quintet was masterfully held together and the big chorus scenes were unleashed with sonic abandon — the Euskadiko Orkestra Sinfonikoa gave it their all.
The support roles — Frasquita, Mercedes, Remendado, Dancairo, Zuniga and Morales — were of proper age, voice, and experience (i.e. gratefully not pieced together from a young artist program). The Mercedes of Basque mezzo Itxaro Mentxaka was especially interesting as the middle aged wife of Lilas Pastia, the Zuniga of Italian Federico Sacchi stood out as a real sleaze, his brutally murdered body an unforgettable image.
Bilbao is about architecture, as you know. There is an old (nineteenth century), imposing opera house said to be an imitation of Paris’ Garnier that is no longer used. The AsociaciÛn Bilbaina de Amigos de la ”pera†now produces its operas in the theater of the Palacio Euskalduna, Bilbao’s conference center that opened in 1999. Designed by architects Federico Soriano and Dolores Palacios it is supposed to be like a vessel permanently under construction (it stands on a dock of the former Euskalduna Shipyard). It received the 2001 Enric Miralles award at the 6th Biennial of Spanish Architecture.
However striking the architecture may be, and the public areas are of interest if a bit hard to navigate, the hall itself reveals the lack of interest architects in general seem to have for opera. If these two architects had ever been to an opera they would know that an auditorium is a dark place to sit while you observe a performance, that no prime seating space should be sacrificed to some questionable geometric design whims, that every seat should be as close as possible to the stage (the upper reaches of this theater are unbelievably remote), and finally, actually first of all, that the sound in the hall is of utmost importance (the cavernous depths of this theater create a hollow “cavernous” sound).
Ignoring these completely obvious requirements for the auditorium one can only imagine the ignorance these architects will have exercised in designing the stage (here too wide), wings and dressing rooms. Is there no prize for bad theater architecture. There is a stupendous amount of it worldwide that could compete for being the absolute stupidest.
Michael Milenski