Not that there was not some good singing, namely Czech soprano Zuzana Markova as Lucia. Originally the Lucia of the relief cast (taking two of the six performances) this beautiful young singer was advanced into the primary cast when illness forced the first Lucia to cancel. Of secure technique, solid musicianship and a voice in its youthful bloom Mlle. Markova did hold the stage the entire evening, lacking only a diva presence to achieve a convincing bel canto performance. This talented young artist is in dire need of coaching — not only how a real diva artist might act this demanding role but also how a real diva might act.
Certainly Mlle. Markova was not in a position to pull diva antics, like refusing to wear the costumes designed for Lucia by OpÈra de Marseille house designer Katia Duflot. A bona fide diva would know that if the audience was baffled by the gravity defying design of her bare shoulder red gown, it was probably not paying attention to her performance. Never mind that the red gown did not finally reveal a topless Mlle. Markova, the bare shoulder white gown of the wedding scene all but revealed everything. Mlle. Markova’s lovely young breasts simply upstaged her beautiful young voice. 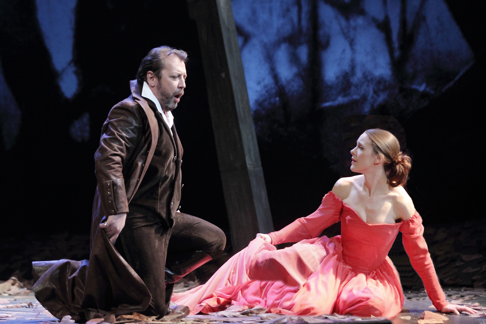 Giuseppe Gipali as Edgardo, Zuzana Markova as Lucia. Photo by Christian Dresse
On the other hand Lucia’s brother Enrico sung by French baritone Marc Barrard was visually choked by the high collar Mme. Duflot engineered for his first act costume. Our sympathy for his strangled sound was however unfounded as his later costume with unbuttoned shirt allowed plenty of breathing room. We discovered that his voice is unfocused and sounds very worn, or perhaps making a bel canto sound is simply foreign to his voice. If the program booklet biography is at all complete this role may have been his first venture into this repertory.
Giuseppe Gipali was the Edgardo. This Albanian tenor turned bel canto into can belto in vocal tones and shapes that were stylistically appropriate if monochromatic and unvaryingly forte. Mr. Gipali is not an affecting performer, his eyes never on the person (Lucia) he was singing to, instead his face was always outward, performing directly to the audience. His final scene — his suicide — was in fact splendidly sung, lacking any hint of sincerity of emotion that could bring this famous opera to its hyper-Romantic conclusion.
And finally Polish bass Wojtek Smilek was Raimondo, the Calvinist priest. Mr. Smilek is an important local resource, frequently appearing in Marseille, nearby cities and in Paris. He sings just about every smaller principal bass role you can think of. Unfortunately Raimondo is a big role, with lots of exposed singing. While Mr. Smilek is a fine singer he does not have the warmth of tone required for basso cantante roles nor the smoothness of line that can make him a lyric bass.
Lucia di Lammermoor is a numbers opera, one big aria or duet after another, embellished by chorus interjections that change circumstances to motivate even more beautiful singing — there is simply a huge amount of a very particular style of solo singing. This opera must be carefully cast. It was not. 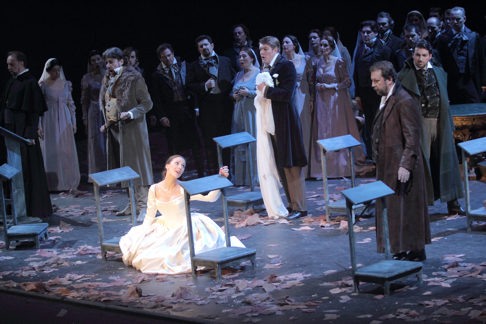 The Sextet. Photo by Christian Dresse
The pit was overseen by French conductor Alain Guingal who responsibly sustained the proceedings but supplied no stylistic flourish to make this evening musically vibrant. While the big harp obligato in the first act was magnificently played the flute duet with Lucia’s mad scene was rendered with contours and colors that went too far beyond those offered by Mlle. Markova.
The new production was staged by French theater director FrÈderic BÈlier-Garcia. He is the absolute master of staging operas that are strings of numbers, finding natural seeming motion for his singers while they perform lengthy arias about how they feel. Here he exploited a new trick by sometimes taking his singers to the extreme sides of the stage to stand against the wide soft black false proscenium, removing the singer from all scenic context. With absolutely glorious lighting by designer Roberto Venturi the singers were suddenly stripped of everything except voice and artistry —what greater effect could be created for the supreme moments of bel canto opera!
The physical production was designed by Jacques Gabel, a frequent collaborator of Mr. BÈlier-Garcia. The design was minimal, two scrims on which various forest shapes were projected, a platform that was sometime a ramp and sometime a pier, like on a lake, and (of course) a chandelier. The sensuous stained glass Jesus figure on a panel flown in for the Enrico/Edgardo meeting is hard to explain, as are the brilliant northern light colors that embellished the scrims from time to time. But not as hard to explain as the costumes described above that just did not seem to belong in a drafty old Scottish castle.
Michael Milenski