But it has been raining a bit in San Francisco, and global warming might even make San Francisco wetter rather than dryer. All this took a bit of the edge off this far-fetched conglomeration of an opera within an opera within a commentary. The good news is that we heard some very good singing by well-trained young artists, and there were some snappy performances as well. Not to forget a quite capable little orchestra in a real pit in a real and indeed fine theater, the Lam Research Theater.
San Francisco has long been in need of an additional opera company to explore vast expanses of the repertory left untouched by the heroic scope of War Memorial Opera House. The 750 seat Lam Research Theater offers a potential home to such an opera company, and maybe it is Opera ParallËle, a venture of conductor Nicole Paiement and stage director Brian Staufenbiel, who have mustered a couple of productions each year since 2010, some of them in this fine theater.
This sally onto the Lam Research Theater stage was a meager production — a too real, quite forlorn 22 foot, vintage cabin cruiser put up on wheels and clumsily pulled around the stage. There was no context for the boat, like a parched earth ground or like denuded hills surround, though there were some meager gaseous aurora borealis lighting effects that flickered faintly from time to time that maybe were drought related.
The little, and it is conceptually and musically inconsequential, Mahagonny did not hold together visually or musically on the open, blank stage and the singers were simply too singerly, their elegance a poor substitution for the Weill/Brecht intended grit. Mme. Paiement’s orchestra was without edge and the maestra’s tempos felt leaden indeed. 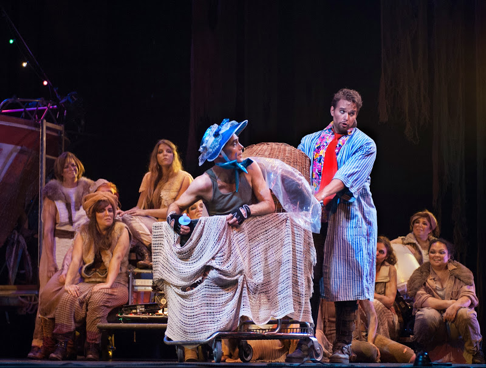 Glenn as The Boy, Gabriel Preisser as The Husband in Les Mamelles de TirÈsias. Photo by Steve DiBartolomeo, Westside Studio Image
But it all picked up splendidly when the evening morphed into the Poulenc boulevard musical, Les Mamelles de TirÈsias intended to titillate and distract the post WWII Parisian public. To be sure the “advanced” social ideals seemed a bit overworked in long-emancipated San Francisco. Fortunately director Staufenbiel did not take the issues too seriously having transformed the piece into I pagliacci (a commedia dell’arte troupe descends on a backward village) here Weill’s singers come upon a camp of refuges from drought stricken village somewhere on the French Riviera. Except it was on a blank black stage.
The downstage sideways positioned cabin cruiser did work very well in Les Mamelles because it gave many levels for action, and many nooks and crannies for visual surprises. You could forget the off-the-wall concept (at least there was a concept, a concept sorely lacking these days in the War Memorial) and simply enjoy the quite appealing music beautifully played in the pit and sung on the stage.
Baritone Gabriel Preisser brought unusual warmth and charm to the role of the ThÈrËse’s husband, tenor Thomas Glenn stood out in his Les Mamelles caricatures and more than anyone else approached the tone of the Weill. Bass-baritone Hadleigh Adams brought snap and flair to Les Mamelles’ antagonist, the Constable. The entire cast attests the high level of training behind young American artists, and the accomplishment of these young singers was very pleasurable to behold.
It will be a relief to perceive them as artists of personality someday, hopefully soon, rather than as fine young singers. Perhaps Opera ParallËle can accomplish this with deeper production values.
It was finally a well realized evening, of institutional accomplishment and promise. Off-the-wall is meant as a compliment by the way, forget the unfortunate transition at the end back into the little Mahagonny.
Michael Milenski