All for Lodovico Ariosto’s brief histoire of Ginevra and Ariodant in his send-up of chivalry in his epic farce Orlando Furioso. By the time this little story got to opera it had lost the famous indulgent smile Ariosto cast on knights and damsels and now needed about twenty-five arias to resolve a truly complicated mess.
This production by British director Richard Jones was created just now in Aix, the start of its travels to Amsterdam, Toronto and Chicago — the Aix Festival has an incessant belief that co-productions are economical.
Somehow Ariosto and Handel and the American Midwest made Mr. Jones think of American Gothic painter Grant Wood’s “Dinner for Threshers” (or maybe it was Ultz’s idea, his mono-named designer). The set was an exact copy. We would not have known where Handel’s opera takes place had not Ariosto’s King of Scotland worn a kilt. But Richard Jones’ American threshers of the Wood painting were on the stage much of the evening keeping the action firmly in the western hemisphere, a presence that did not endear them to the exasperated audience (there was whistling when these valiant participants took their 2 AM bows). 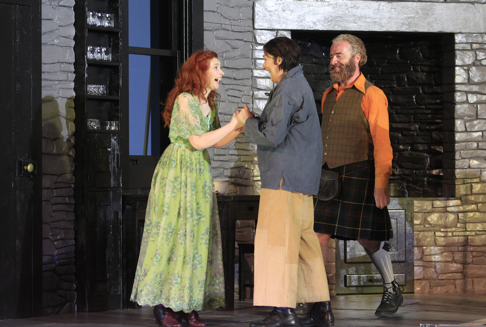 Patricia Petibon as Ginevra, Sarah Connelly as Ariodante, Luca Tittoli as Il Re di Scozia†
Mr. Jones determined that Ariosto’s poetic immolation of fallen damsels might be poetically well represented by implying the brutally restrictive mores he imagines imposed by American gothic principles. It is an amusing premise, probably more amusing to Europeans than to Americans like me who think that Europeans should mind their own moral business.
Handel’s Ariodante is different than most Handel operas because it includes dance interludes (Handel inserted them to be able to include the participation of a famous dancer and her company at the Covent Garden 1735 premiere). Since Ginevra is believed to be a fallen woman these interludes made Mr. Jones think of burlesque pole dancing (an art form born in Canada during the Great Depression by the way) that he was able to include by turning Ginevra, at least as imagined by American threshers, into a puppet who was stripped of her chaste garments, then scantily clad in black vinyl and red spike heels and made to masturbate abstractly on a rake handle.
But Mr. Jones did not exclude dancing after all, as he had his American threshers shed their shoes and line them up across the front of the stage in the old death ovens image and happily do a country dance to the arias that announced the “they-lived-happily-ever-after” resolution (The king of Scotland was spared from burning his daughter who married her intended, Ariodante, after all).
Mr. Jones’ real Ginevra however bought none of this. She packed her suitcase, slipped out of her bedroom, walked onto the stage apron and when last seen was hitching a ride, presumably to Toronto or Chicago.
Maybe there was Ariosto’s famous smile after all. The audience indulged Mr. Jones with rapt attention in the second and third acts (it was hard to concentrate in the first act — read on), and rewarded him with thunderous boos (huÈes in French), meaning that we had had a very good time and loved every minute and that we did not know what to think. Mr. Jones’ wide smile never left his face.
Where was Handel in all this, you may ask. Well, he was right there and having a very good time too, though none of this was what he had in mind.
The esteemed Freiburger Barockorchester is in residence in Aix for this 66th Festival d’Aix with its period brass and wind instruments, and its gut strings making its uniquely cultured sound that placed Handel’s score in another time and another place. Just when you might have thought that it does not really matter what orchestra is in the pit for a Handel opera an aria would come along that was infinitely enriched the with colors that could emanate only out of this superb orchestra.
Handel surely could have only rejoiced to the matched cast of excellent singers brought to Aix for the occasion. French soprano Patricia Petibon overshadowed all others in an over-the-top performance as Ginevra, able to float beautiful high, straight (vibrato-less) tones and to cut loose in full voiced lyricism. As Mr. Jones’ Ginevra she introduced a pathos to her Act II lament (she believes Ariodante is dead) that went beyond brilliant Baroque singing to arrive, almost, at whispered tones. In total her very clear voice melted into a beautifully defined and determined character — it was a complete performance. 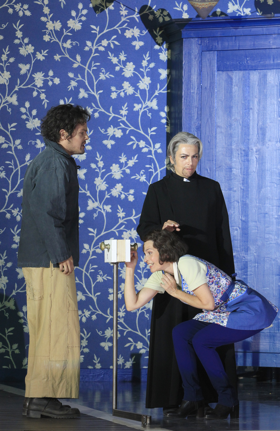 David Portillo as Lucanio, Sandrine Piau as Dalinda, Sonia Prina as Polinesso
No less striking was the Polinesso of Italian contralto Sonia Prina as Handel’s vindictive Duke and as Mr. Jones’ morally corrupt fundamentalist preacher who stood over Grant Wood’s harvest table during the overture to deliver the blessing (an understandably exasperated audience member shouted “oh sit down”). Mme. Prina sang with color and assurance as if she were a famed castrato, her staccato fioratura genuinely astonishing, her brilliant wig (a long gray, troublesome lock on either side fell onto her face, plus a long, sexually ambivalent braid) made us detest her even more.
The balance of the cast gave high-wire vocal acts as well. Dalinda (Ginevra’s maid) as sung by French harpist turned soprano Sandrine Piau was not Handel’s confused soubrette but a full-scaled vocal villain who raged magnificently at love and not because Polinesso had raped her (on stage) but because he did not love her. Ariodante’s brother Lucanio was sung by American tenor David Portillo who was the junior member of the cast, and even so managed to hold his own and render his inexperience and youth as Lucanio’s innocence and naivetÈ. Italian bass Luca Tittoco straddled the poles of an isolated, old fashioned farmer who should have felt a bit silly in a kilt while he had to be a mythical personage from the age of chivalry at the same time.
Ariodante, British mezzo-soprano Sarah Connelly, brought an encompassing warmth to Handel’s hero, having suffered setbacks worthy of Ariosto’s erstwhile knight on her way to the stage, escorted from her dressing room to the stage by police who protected her from the intermittents who had broken into the backstage of the theater, knocked over a stagehand and blocked her way (first act). Later (second act) she waited to deliver her exquisitely chiseled lament (Polinesso had deceived Ariodante into believing that Ginevra was unfaithful) while a screaming car alarm was located and removed from the auditorium.
Italian early music conductor Andrea Marcon [sic] presided, evidently unflappable, over the evening, not stopping when the intermittents began a barrage of noise just outside the open air theater during the first act. Though later he coolly halted his pit musicians and the stage when security measures needed to be undertaken, started again as if nothing had happened. Thankfully in Act III (1:30 AM) he did not stop when lightning, thunder and raindrops competed with Handel and Richard Jones for our attention. The wind whipped costumes of the singers must have created some consternation among those on the stage who surely were, like us, praying for the end to come.
And yes, finally, the twelve valiant threshers from English Voices, the excellent chorus, took off their shoes and danced one last time. We booed gleefully and went back to our hotels.
Michael Milenski