Luckily German baritone Matthais Goerne and Austrian pianist Markus Hinterhauser were enlisted by the Festival to imbue genuine nordic Romanticism into the Schubert masterpiece. Albeit the strum und drang of late Romanticism that seemed on the brink of expressionism.
Mr. Goerne is famous for his performances of Die Schˆne M¸llerin (including a recent performance in San Francisco), making this 1826 Schubert cycle an outwardly emotional experience within his evenly tempered, dynamic and very clear baritone sound. It is a reading of the cycle that proves his mastery of its performance traditions and embarks on a measured transcendence of historical style and Schubertian presence. 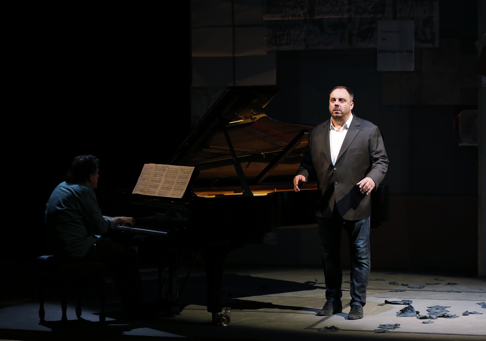 His Winterreise was even more transcendent. It was a terrifying, angry journey through Schubert’s bleak landscape. Mr. Goerne emitted uncomprehending cries and bitter exclamations reliving an heretofore unexplored agony that can only be supposed within the soul of the syphilis stricken 28 year-old composer. With his accomplice Markus Hinterhauser hunched over the gigantic Steinway piano middle-aged Matthais Goerne exposed Schubert’s one hour twenty minute journey in unrelenting, electric tones that tore through your soul.
The physical presence of this large man and powerful artist, his voice magnified by the designer acoustic of the recital hall of the new Aix conservatory of music, plus the resources of a twenty-first century engineered concert grand piano played by a hyper sophisticated musician (Mr. Hinterh‰user is the artistic director of the Salzburg Festival) could only dwarf the gloss of the video accompaniment imagined by South African artist and actor William Kentridge. Mr. Kentridge does not possess the vocabulary or emotional scope to embody or virtualize these first moments of the very brief Schubert maturity.
In spite of a vague physical resemblance (both middle aged, comfortably fed men) Mr. Goerne could not become the traveler imagined by Mr. Kentridge. In fact that traveler was William Kentridge himself, his pen and ink drawn profile (resembling and as recognizable as the famous profile of Alfred Hitchcock) marched across the screen already in the second song. This alone created an insurmountable gulf between the actual (Mr. Goerne) and the virtual (Mr. Kentridge). 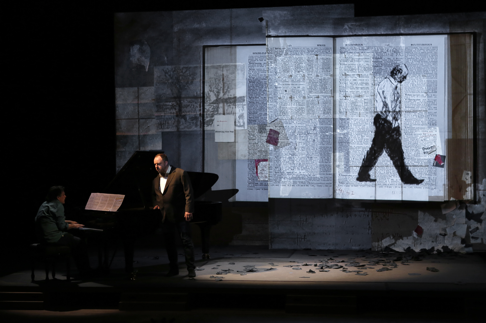 Mr. Kentridge is well known to opera audiences through his brilliant stagings of a puppet Il ritorno d’Ulisse and a multi-media Die Zauberflˆte. His staging of Shostakovich’s derisive The Nose was betrayed by his evident good and open nature, quick wit and easy charm. These overpowering Kentridge attributes were indeed present in his Winterreise as well and were in irreconcilable conflict Mr. Goerne’s angoisse.
There were a few interesting moments. Baritone Goerne gave his performance in concert position standing by the piano that was placed off to the side of a low stage platform backed by a large screen. In the seventh song Goerne walked to the middle of the platform to relate momentarily to the projected visual field — Schubert’s river torrents were rendered as pen and ink drawn water faucets. It was conscious recognition that there was no connection between music and image, and this alone created a powerful connection.
Again in the seventeenth song the baritone moved center stage to recognize Muller’s sleepless villager who had become Kentridge’s sleepless, cigar smoking mogul — a striking, wild card image that effectively layered extraneous nineteenth century industrial revolution overtones upon baritone Goerne’s private and personal desolation.
The twenty-first song, Schubert’s inn by a cemetery, achieved a sort of unity of word and image. Kentridge rendered the simplicity of the conceit of this song by drawing lines of tombstones in crude shapes that bespoke his exhaustion of ideas. And finally in the twenty-fourth and final song Schubert’s old man rolling his cart on icy paths through the freezing village became Kentridge’s procession of bent South African black women, silhouettes, carrying their burdens or pumping railroad carts, images that are a recurrent image in the Kentridge oeuvre. Word and image were in distinct hemispheres (northern and southern) but became, surprisingly, one globe.
Katie Mitchell’s Trauernacht is a collection of four choruses, five recitatives and five arias (ranging between BWV 46 and BWV 668) from among J.S. Bach’s 200 cantatas. Plus an initial a capella motet composed by Johann Christof Bach that at once reduced our expectations of the vocal forces for the evening to the four singers who were on the stage to sing it.
British stage director Mitchell distinguished herself at the Aix Festival two years ago with her staging of Richard Benjamin’s Written on Skin (it was a complicated household situation) and returned last summer for another premiere, The House Taken Over (a complicated household situation) thus it was no surprise that Trauernacht (Night of Mourning) was a complicated household situation — a soprano, alto, tenor and bass try to come to grips with the death of their father over dinner. 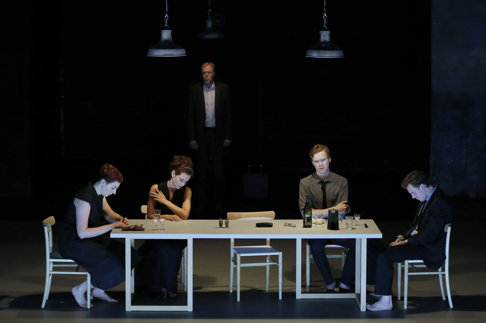 Katie Mitchell and young French early-music conductor (and counter-tenor) RaphaÎl Pichon compiled these bits of cantatas that are sort of like a requiem mass — a sinner begs to be saved — though unlike a requiem mass it seems in Trauernacht that the children ultimately find solace in the illusion that their father basks in the gaze of God.
The four voices (two males and two females), simply and somberly clothed, wandered onto a platform where there was a dinner table and four chairs, though there was a fifth chair that was finally occupied by the father who sang one brief aria. However for most of the evening he remained a phantom who sat at the back of the naked stage, standing up from time to time to whistle eerily.
The four singers had mastered slow motion movement in order to move on and off the stage without disturbing the almost beat-less flow of the music. These artificial movements were quite extended as the singers served themselves a three course meal from shelves that were on the far sides of the stage. They were barefoot.
All this might have worked had the musical forces been finished artists. As it was the young musicians on the stage and particularly those in the pit lacked the polish to create a purity of sound and form that can propel J.S. Bach’s music into celestial spheres. What might have been sublime music (and probably was on the recordings used to imagine this pastiche) became a tedious exposition of antique four-part harmony.
Katie Mitchell is old enough to have known better.
Michael Milenski