It is an opera some of us may now find to be a naive or simplistic artifact, nevertheless emblematic of those years.
Vanessa (1957), West Side Story (1957), The Saint of Bleecker Street (1955), and Susannah (1956) are the survivors from that decade. Like Vanessa, Susannah is a morbid short story though Vanessa is urban, subtle and twisted while Susannah is rural, obvious and brutal. At first Susannah may seem a bit like verismo, Cavalleria Rusticana for example, but it lacks the single physical blow and emotional resolution, dissolving instead into a sea of musically unsupported judgmental ironies.
Like West Side Story, Susannah is musical theater moreso than it is pure opera. It is a series of relatively brief, showy musical numbers that each illustrate a single emotion or situation. Its few action scenes are in elaborated recitative that is not integrated into larger musical structures.
West Side Story and The Saint of Bleecker Street are urban Americana composed by sophisticated New Yorkers (Bernstein and Menotti). These were the plights of poor immigrant Americans with strong ethnic accents, and music that eschewed the then current European complex serialism in favor of popular idioms and traditional forms.
Susannah composer Carlisle Floyd was born in South Carolina. He was a tenured professor at Florida State University and later founded the Houston Opera Studio. He writes about the American south (both words and music) in verbal declaration for which a strong regional accent is taken for granted. His musical idiom combines easy flowing tonal music with a big folksy overlay (hymns and mountain tunes) spiced with a bit of glowing dissonance.
Susannah may be the second most performed American opera but there is an immense gulf between the artistic intelligence and power of Porgy and Bess and the blatant moralism of Susannah.
Neither Gian Carlo Menotti nor Carlisle Floyd pushed the artistic envelope sufficiently to be discussed in Alex Ross’ history of music in the twentieth century, The Rest is Noise (2007). But make no mistake, along with these other works Susannah too is an operatic masterpiece in its way, and it is a quite modest way. 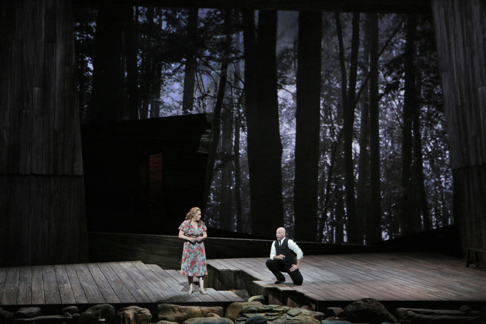 Patricia Racette as Susannah, Raymond Aceto as Blitch
Susannah was composed for the reduced circumstances of post WWII and as a populist work of art consistent with the socialistic artistic politic of the time. Premiered in Florida it quickly made its way first to the New York City Opera, “the people’s opera” and then to the 1958 Brussels World’s Fair where it represented American culture. One can only question the wisdom behind the choice of specific, ugly content to portray American life to the world at large.
Just now San Francisco Opera rolled out a handsome new production that filled the War Memorial Stage. Canadian stage director Michael Cavanagh with his designer Erhard Rom created splendidly realistic expanses of southern mountains with scrims and projections. These lovely photographic impressions of nature were at odds with a modernistic cross, a huge, neon lighted (it seemed) cross typical of modern suburban mega churches that loom over the revival meetings. It screamed naivetÈ of concept. 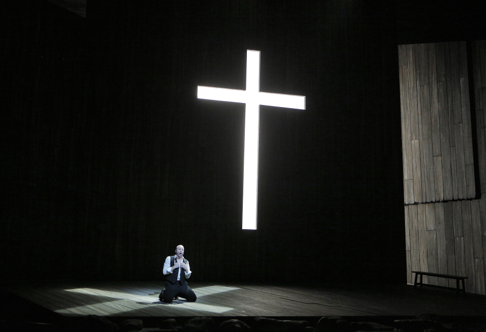 Roaymond Aceto as Reverend Blitch
A similar conflict arose in the stage direction, Mr. Cavanagh alternated between the presentational naturalism of the hayseed presences of Susannah, her brother Sam and the church elders, and clumsy solutions to managing the presentational needs of the crowd scenes at the picnics and in the church. Also clumsy were the several times a character was asked to silently act out conflicting emotions while we musically waited from him to make up his mind. Mr. Cavanagh is less to blame for these unsuccessful moments than Carlisle Floyd.
Soprano Patricia Racette, long a Carlisle Floyd heroine, still pulls it off, even in this latter day essay as Susannah. Because la Racette is usually associated with the great roles in the grand repertory it seems a waste to cast her in such simple music. The same can be said of tenor Brandon Jovanovich who gave us a superb Sam, Susannah’s brother, his performance utilizing but a tiny percentage of his capability (Lohengrin in 2012 for example). Of the three principals only bass Raymond Aceto as the Reverend Blitch did not find an un-self conscious Americana presence, his performance was purely big house look-at-me opera singing and acting. The smaller roles were well cast.
This little opera can pack quite a wallop in the right circumstances. Susannah simply does not blow up to grand opera proportions.
Michael Milenski