It was a rare evening, very rare, at San Francisco Opera when everything, almost everything, went together perfectly.
La cenerentola is Rossini’s most complex, and certainly greatest comedy. The competition is stiff indeed — L’italiana in Algeri (1812), Il turco in Italia (1814) and Il barbiere di Siviglia (1816). What separates Cenerentola (1817) and puts it way out front is the sheer size and number of its ensembles, big concerted pieces with four, five and six-voices, sometimes with chorus as well. These are the hallmarks of the great tragedies that begin with Otello (1816), the opera composed by Rossini immediately before Cenerentola.
Both Armida (1817), the tragedy written immediately after, and Cenerentola end with a huge showpiece aria for the prima donna. These years are the mature Rossini who demands big, virtuoso singers, like Cenerentola whose bravura alone must be sufficient to close the show and bring the audience to a level of delirium that made Rossini the most famous opera composer in the world.
Virtuoso singing and the sculpting of the highly sophisticated musical architecture of the arias and ensembles are the challenges of this great comedy, both challenges well met just now in San Francisco.
Conductor Jes˙s LÛpez-Cobos made a wunderkind debut at San Francisco Opera in 1972 at the age of thirty-two, and returned for the fall 1974 season, again for more of the big Verdi repertoire. Now, after an absence of forty years, he is back on the podium, a master of what some of us believe to be the epitome of what opera can be — the mature Rossini! The Rossini ethos is also the most delicate of all the great composers and it is sublime when it is revealed. This is very rare.
Conductor LÛpez-Cobos immediately took Rossini’s overture to the lightest boil. It was the bubbling of the tiny drops of the finest mineral water and the fleetness of a long distance runner, and it kept us there for the duration. In a Rossini tragedy the delight would be the suspension of time into pure lyricism (you forget to breathe), and the sheer joy of releasing emotion, tragic though it may be. In a comedy, you found a smile on your face, your foot marking the beat. Sheer delight. In Rossini, comedy or tragedy, it is the same music and the same joy of making that music.
The LÛpes-Cobos tempos and his flights of Rossini’s sophisticated instrumentation were never indulged for effect. For example the patter pieces (when a male voice breaks into rapid words) did not so much amaze us with lightning speed as they amused us with rhythmic words. The ensembles never lost their individual voices by accelerandos intended to drive us to musical fulfillment, instead we remained immersed in the complexities of the ensembles. It was measured conducting that at once reconciled Rossini with his music and Rossini with the singers provided by San Francisco Opera. 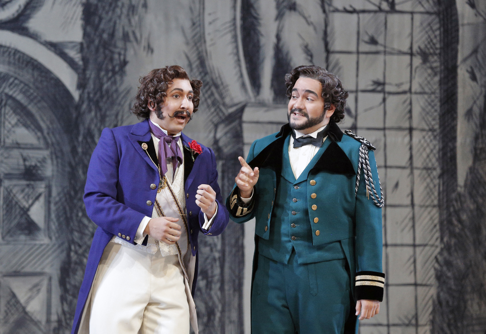 Efrain SolÌs as Dandini, RenÈ Barbera as Don Ramiro
An announcement was made that French mezzo soprano Karine Deshayes was not feeling well and would not be at her best. As it was Mlle. Desayes displayed a reserved temperament and presence that left Cenerentola colorless for most of the evening. In the spectacular finale to the opera, “Non piu mesta” she did vocally approach the needed Rossini vocal excitement if not the personality. Had she not been indisposed perhaps her high notes would have been integrated into the smoother sounds of her lower voice.
Cenerentola’s father, Don Magnifico, was sung by Spanish bass-baritone Carlos Chausson. A seasoned interpreter of Rossini roles he was perfection itself in the delivery of this role as generic buffo. Bass-baritone Christian Van Horn, perfunctorily and colorlessly (fault of the staging) enacted Alidoro, the facilitator of the familiar story. 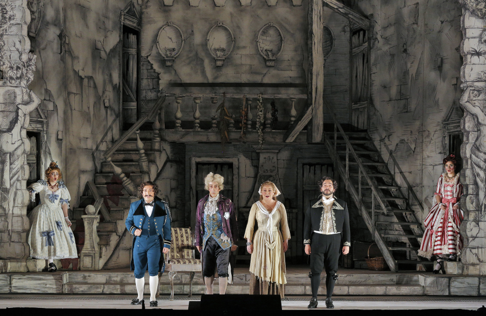 Production by Jean-Pierre Ponnelle
Young Texan tenor RenÈ Barbera made a splendid prince aka Don Ramiro in beautiful, smooth voice throughout the role’s very high tessitura. He delivered his big second act cabelletta “Si, ritrovarla io giuro” with the voice and personality that have made him the winner of vocal competitions and with high C’s to spare.
Among San Francisco’s great treasures are the Adlers. These young singers are usually the messengers and maids in the grand repertoire, and sometimes are over-parted in important roles. In this Cenerentola production they were utter perfection as Dandini and the ugly step sisters Clorinda and Tisbe. Both Maria Valdes and Zanda Svede made these minor roles (only Clorinda has a very brief aria) into scene stealing roles with the help of their stage director, Gregory Fortner.
But the biggest star of the evening (and it was a stiff competition) was California baritone Efrain Solis as the prince’s servant Dandini. This young singer exuded the charm, pent-up fun and exuberant singing that will make him a Rossini star. The cherry-atop-the-cake was the physical resemblance of Dandini, the servant, to Don Ramiro, the prince whom he was impersonating.
In its heyday San Francisco Opera not only discovered Jesus Lopez-Cobos but also Jean Pierre Ponnelle, a young French scenographer who revolutionized San Francisco’s idea of what opera production could be. This brilliant designer turned stage director created this production of La cenerentola for San Francisco Opera back in 1969 — forty-five years ago! Its black and white, pencil drawn filigree and apparent architecture (cross-section of a multi-storied house) make it both storybook and physically tangible. It is self-consciously old and that alone made it new back in the ’60’s. More importantly its decor is integrated into action — the actors climb throughout the set — it was opera as scenographic action, not just singing.
The limitation of the Ponnelle set is however its symmetry, and it is stifling. The larger Rossini repertory was just being re-discovered back then. Since then Rossini performance practice has evolved to understand and embrace the structural complexity of these works. A mise-en-scËne now must incorporate the musical score as a physical and intellectual component of the staging. This can be accomplished by imposing concept and shape as powerful as the music — strength of concept is no longer perceptible in this antique production.
Jean-Pierre Ponnelle who died in 1988 has long since not been a part of his production. It has been staged in recent revivals by Gregory Fortner who has staged this gifted cast in San Francisco as well. One assumes he kept the basic outlines of the original staging, respecting the symmetry of the set. He certainly will have added clever schtick to keep the action energized and to showcase his performers.
It is time to memorialize the Ponnelle production in photographs and move on to productions consistent with current performance practice.
Michael Milenski