It begs asking why the opera comes back so soon. This is not a distinguished cast, and the production is the 1997 remake of the 1932 SFO production mounted for the umpteenth time.
Still it was an interesting and amusing experience.
The conducting was strikingly different from the powerfully present performances of 2012 (Nicola Luisotti). Just now the conductor was Riccardo Frizza, an Italian maestro who has worked in many important theaters around the world. If his program booklet biography is at all complete he has never before conducted a verismo opera.
Here in San Francisco he has earned critical accolades for the bel canto repertoire (Lucrezia Borgia and I Capuleti e i Montecchi. And this Tosca was pure bel canto — beautiful (pretty) music, lovely detail, flowing lines. It was music about singing, not about the brutal humanity of verismo. The first act was a delightful revelation of relaxed tempos that allowed a melodic flow. It was almost like you had never before seen the opera.
However the melodic flow was uncomfortably broken from time to time to accommodate a singer’s need/urge to exaggerate the duration of a high note, a basic stylistic impulse of later Italian style.
These same relaxed tempos imposed a dramatically flaccid second act. The pastoral beginning of the third act erased any hint, and there had been very few, of dramatic tension. We simply waited until Tosca leapt.
Young Armenian soprano Lianna Haroutounian was the Tosca. Mlle. Haroutounian is not a diva. Tosca is a diva. That Mlle. Haroutounian may soon be a diva is without question, though divas come in all manner, shape and size. Probably this wonderful young proto-diva will never be a Tosca, i.e. a character diva. She exudes little innate dramatic temperament.
Mlle. Haroutounian does exude a purity of voice that casts her as the Verdi heroine. She has the beauty of voice, the size of voice, and the security of technique to immediately place her among the most sought after choices for these roles. That she has the complexity of personality and the dramatic intelligence to become a great artist is yet to be seen. 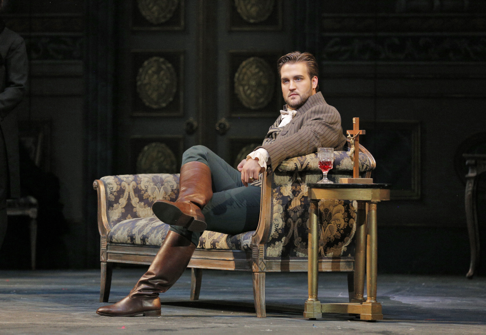 Brian Jagde as Cavaradossi
Young American tenor Brian Jagde was the Cavaradossi. This former Adler Fellow has at last shown that he is ready for the War Memorial and other important stages, that he a finished artist. As the Luisotti Cavaradossi and Pinkerton he seemed over-parted, maybe even terrorized. Here with Maestro Riccardo Frizza in the pit he was given the musical space to sing, and that he did beautifully. While Mr. Jagde does not embody the Italian tenor emblematic of this role he did exhibit the fruits of his excellent American training.
Baritone Mark Delavan sang Scarpia. Without musical tension coming from the pit, and without a Tosca with whom he could emotionally spar his cardboard evil character was meaningless. Perhaps he was attempting to create character by slurring his words but the effect was that he might have had some caramel in his mouth. On the other hand the Italian diction of Kansas born Scott Conner as Angelotti was admirable.
Jose Maria Condemi was the stage director. This very able facilitator of remounted productions was sabotaged by the musical pace from the pit and the naivetÈ (inexperience) of Mlle. Haroutounian. What would have been effective staging in a dramatically pointed performance became too many clumsy moves.
It was an evening of beautiful music and beautiful singing. Maybe you wanted more.
Michael Milenski