It is true that the K·?a Kabanov· libretto is closer to The Makropoulos Affair and From the House of the Dead, sharing the brittle dramatic structures of these works and revealing the growing selfishness and emotional pessimism of the sixty-seven year old composer. But musically K·?a Kabanov· seems spoken in the same voice that sings the emotional idealism of Jen?fa. Herein lies the challenge of producing K·?a Kabanov· — it must hover between hope and hopelessness.
The OpÈra de Toulon has just now presented this Jan·?ek masterwork for the first time ever. It is a new production shared with the OpÈra d’Avignon, thoughtfully and carefully directed by Nadine Duffaut. The set is by Emmanuelle Favre, a designer often utilized in the south of France, notably Orange, Marseille and Toulouse. Mme. Favre works in bold strokes, in big shapes and with few colors. Her dÈcors are impressive, expressive and beautiful. As is the set for K·?a Kabanov·. 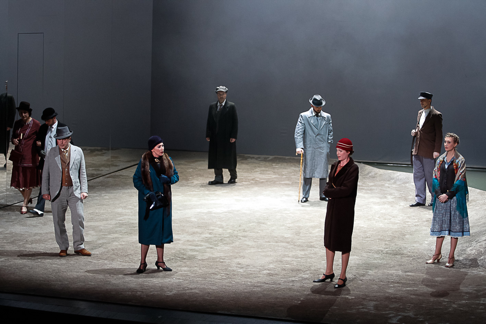 Set design by Emmanuelle Favre, costume design by DaniËle Barraud
The stage was a huge white box, a full stage platform with period furniture on it hovered high above the stage floor, descending to create an interior or to provide shelter from the storm. The side walls were mirrorized making occasional flashes of the brightly colored costumes, like the sonic flashes of Jan·?ek’s nervous orchestra. The Volga was a pool of real water, its splashes the visual echos of nerves on edge.
Family and business are the crushing forces in K·?a Kabanov·. They are embodied in this suspended platform, and in the very presence of Kabanicha, the mother of Katia’s husband, sung by mezzo-soprano Marie-Ange Todorovitch. Mme. Todorovitch too is often on the stages in the south of France. She is a force of nature, her voice powerful, her presence riveting. Director Duffaut ended the opera with la Todorovitch standing front and center, triumphant in five intense beams of white light. 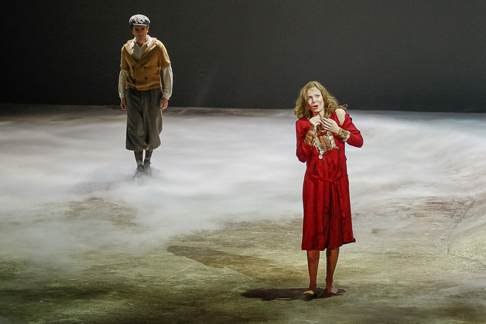 SÈbastien Lemoine as Kouliguine, Christina Carvin as Katia
The drowned Katia lies behind her. Portraying Katia is a vocal and dramatic tour de force, riding the cusp at all times between hope and despair. Franco-allemande soprano Christina Carvin possesses the idea colors — the slavic warmth of tone, a maturity of tone that forebodes, and a freshness of sound that breathes life. Mlle. Carvin made a powerful Katia. This young artist now sings regularly at the Vienna Staatsoper.
Katia’s young lover Boris was sung by Czech tenor Ladislav Elgr with sufficient vocal prowess to indulge in the manic love fantasies of Katia, but never to allow his character to lose its sense of defeat. In the beautifully directed scene when Katia publicly admits her infidelity he hovered in the background, then fled, and after his final moments with Katia near the end of the opera he simply evaporated.
The complementing personalities of Jan·?ek’s slavic world, named below, were perfectly cast, notably Icelandic tenor Elmar Gilbertsson who sang Kudriach, some of it while riding the obligatory Jen?fa bicycle, and some of it skipping stones across the pool of water.
If this fine effort by the OpÈra de Toulon did not create the full impact of Janacek’s brief opera it came close. While the tempos effected by Australian conductor Alexander Briger seemed appropriate and easily managed by the singers, the sounds coming from the pit sometimes seemed labored. It was apparent that the maestro was working closely with the orchestra but even so the boil of Jan·?ek’s orchestral continuum did not always take flight.
Michael Milenski