A new production of Peter Grimes is always news, in fact any production of this first Britten operatic masterpiece beckons travel from afar. Nice Opera artistic director (since 2012) Marc Adam was the metteur en scËne for this new production for which he has collaborated with born-in-Algiers, raised-in-Nice, Juilliard School trained conductor Bruno Ferrandis. Mr. Adam previously collaborated with Mo. Ferrandis for a Wozzeck (Gurlitt) at the Opera de Rouen in 1997.
Much of Bruno Ferrandis’s career has transpired in Canada and the U.S. He is currently the music director of the Santa Rosa (California) Symphony.
Mr. Adam assembled an excellent cast. English tenor Johyn Graham Hall as Peter Grimes possesses an appropriate voice for Britten heros, not the dramatic tenor often associated with Grimes, but the lighter, character voice that characterizes the Aschenbach of Death in Venice, another of Mr. Hall’s Britten roles. Mr. Hall has an affecting presence and the vocal stamina to have seen the role through this production’s expressionist requirements. 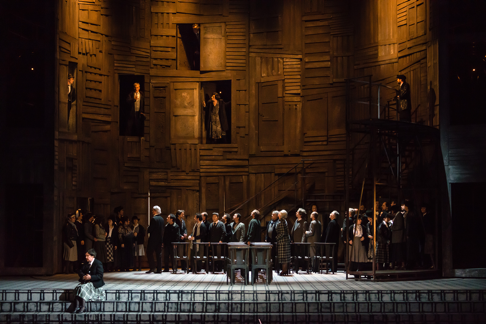 Fabienne Jost as Ellen (left lower corner)
French soprano Fabienne Jost sang Ellen. An ensemble singer at the Berne Opera and previously at German theaters, she offered a purity of voice and a musicality supported by fine technique that made this Ellen very pleasurable, in fact memorable.
Swallow was effectively portrayed by Marseille born, veteran bass-baritone AndrÈ Cognet. French baritone Vincent Le Texier did not find the humanity of, or any softness for Balstrode, often barking his lines rather than singing. We were left unfulfilled by his character. Among the well cast smaller roles Marseille born tenor Edward Mout was especially effective as Bob Boles, all these rustic characters linguistically colored by carefully produced English sounds.
Among the more effective moments of the production were the black and white projections on the scrim covered proscenium that occurred during Peter Grimes’ famous orchestral sea interludes (of course Britten purists would have preferred no visual distraction from the sounds of these magnificent pieces). At times the images were the boiling sea, as well there were affective moments when the costumed actors were seen in pantomime through the foggy images. Puzzling however was the ascent to Grime’s cottage, rendered in images of industrial steel construction (the back side of the semicircular set unit was Grimes’ hut).
Set design was entrusted to Roy Spahn who works primarily in German theaters. It was a strange semicircular multi-level abstraction of windows placed on a revolving stage. Installation of the revolving stage evidently necessitated a raised stage platform (about 60 cm [2‘] high) that was faced with incongruous black and white squares that looked a bit like Halloween decorations. The floor of the stage was not visible from the seats in the orchestra.
A further complication of the raised platform was the necessity to raise the conductor’s podium to give him view of the stage. This seemed to separate the maestro from his orchestra with the resulting impression that the orchestra was at adrift and rudderless, eviscerating the complex, ambiguous, sensual, cruel, tender, passive musico-dramatic world that is genius of Benjamin Britten. From time to time the maestro did take his eyes off the stage and engage the orchestra. These moments supplied brief impressions that the Orchestre Philharmonique de Nice was capable of creating the magic of the Britten score when asked.
It was perhaps an artistic choice of the director and conductor to strip the opera of its colors, moods and ambiguities, and focus the drama on the words and outward behavior of its actors. While this did create a theatrical atmosphere, often of great intensity, it stripped the opera of its emotional focus, rendering its protagonist as mentally unbalanced rather than as a complex human character adrift in a threatening natural world and outside an alien and uncomprehending human world.
Michael Milenski