Just as things were at the first performance of Monteverdi’s Orfeo
on 24 February 1607, in the exquisite apartments of the Gonzaga Palace in
Mantua; except that we are at the Roundhouse in Camden, ducal regalia has been
replaced by slick business suits and clerical attire, and those sitting in
judgement upon the unfortunate pre-nuptial couple, Orfeo and Euridice, are not
the Gods and Spirits of classical antiquity but black-cloaked representatives
of modern civic and ecclesiastical institutions.

The ‘first opera’, the first time opera has been staged at the
Roundhouse, an experienced theatre director’s first essay into opera, and the
Royal Opera House’s first production of Orfeo: this quartet of
inaugurations made for an auspicious occasion, with added interest offered by
the involvement of a chorus comprising students from the Vocal Department of
the Guildhall School of Music and Drama, and dancing ‘nymphs and shepherds’
drawn from East London Dance. And, indeed, there was much to appreciate and
enjoy at this opening night of director Michael Boyd’s production of
Monteverdi’s favola in musica: but, there was also a sense that
perhaps the opportunities afforded by the distinctive qualities of the venue
and the rich variety of the personnel had not been grasped with quite the
innovative spirit shown by Monteverdi himself four hundred years ago. 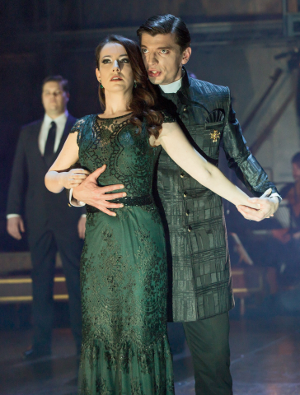 Rachel Kelly as Prosperina and Callum Thorpe as Pluto

There’s certainly nothing wrong with the up-dating; the mythological
heroes of early opera certainly served the rhetoric of propaganda expounded by
the courtly centres of Europe, and director Michael Boyd’s concept of the
conflict between individual creativity and self-expression (Euridice and Orfeo
are clothed in white, albeit increasingly besmirched and charred as the opera
progresses) and a Hadean, oppressive state that quells imaginative freedom is
surely topical. Dressed in grey prisoners’ jumpsuits, the nymphs and
shepherds are initially manacled, their fetters released so that they may
celebrate the forthcoming matrimony as ordered by a Pastor (who has dropped his
bucolic ‘al’); Pluto and Proserpina are chic oligarchs, Charon has an
entourage of ‘heavies’.

And, Boyd tells his story simply and clearly, while Tom Piper’s designs
are straightforward and minimal – the bare, circular stage is adorned with
nothing more than fluttering emerald crÍpe streamers to evoke Elysium.
Disappointingly prosaic perhaps, but maybe there was concern that the
in-the-round acoustic might be less than helpful or flattering (as it is,
modest amplification is employed), and that complexities of staging would
further hinder the singers’ projection and communication?

The libretto is full of references to both singing and dancing – this was,
after all, the first time that a drama had been entirely sung by its
protagonists and Monteverdi and his librettist, Alessandro Striggio, were
perhaps anxious to persuade a potentially sceptical audience that what they
were watching was entirely credible. Thus, movement plays a big part in
Boyd’s production, and the madrigals, canzoni and balletti,
with their tripping, dance-like rhythms are neatly choreographed. But, other
than the set-piece dances, the production is frequently under-directed: so, in
place of inherent dramatic movement which explicates the
relationships between the protagonists and complements the musical narrative,
we have superimposed movement – contemporary dance and circus acrobatics.
Certainly, the young dancers of East London Dance are talented and often
wonderfully expressive: their swirling evocation of the River Styx is
entrancing, and the graceful cartwheels and ebullient somersaults with which
they rejoice the imminent wedding delightfully embody the freshness and joy of
a pastoral paradise. But elsewhere their physical exuberance seems at odds
with the musical discourse and can be distracting, both visually and aurally.
For example, the dancer’s presentation of Orfeo’s grief at the news of
Euridice’s death certainly suggests a tortured soul writhing in anguish, but
it also overpowers the vocal expression and diverts our attention from the
essence of the opera: that is, the power of musical rhetoric. 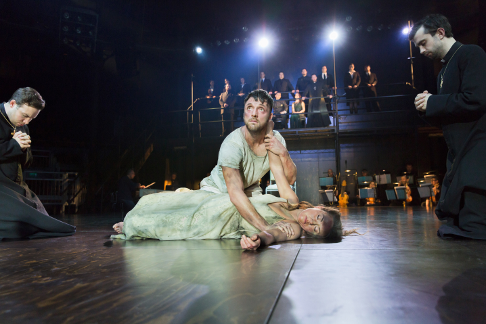 Boyd does conjure some striking visual images. In the Prologue, La Musica
(Mary Bevan, who also sings the role of Euridice) is unshackled and as she
begins her strophic introduction to Orfeo’s tale, the tragic protagonist
(Gyula Orendt) is carried in, borne aloft like a victim of crucifixion, so that
she might clasp him in her arms – thereby foreshadowing the close of the
opera, when the sorrowful Orfeo cradles his ‘lost’ beloved. Similarly, the
lovers’ reluctance to part so that Euridice may prepare for the wedding is
suggested by the chain of hands which stretches from Orfeo at the centre of the
stage along the raised entrance platform: the outstretched arms prefigure the
final dramatic image of Orfeo’s futile grasping for his beloved’s lifeless
hand as he is raised heavenwards.

On the whole, and fittingly, in the absence of anything more than
rudimentary stage action, it is the singers who must communicate the drama, and
the cast are uniformly excellent. Mary Bevan sings with control and purity,
suggesting the innate grace and goodness of Euridice, while Susan Bickley as
her friend Silvia (Monteverdi’s Messenger) imbues this minor role with
intensity and character. Callum Thorpe’s even bass-baritone conveys Pluto’s
cool self-assurance and he is ably partnered by mezzo-soprano Rachel Kelly’s
gleaming Prosperpina. As Charon, James Platt uses his strong bass-baritone to
suggest Charon’s menacing obduracy. Tenors Anthony Gregory and Alexander
Sprague blend beautifully with Christopher Lowrey’s warm, appealing
countertenor, and all three Pastors communicate the drama powerfully.

As the only non-native speaker in the cast, Hungarian baritone Orendt
isn’t always successful in his enunciation of Don Paterson’s new
translation which tells the story plainly, without fussy conceits and with some
effective and unobtrusive use of rhyme. But, Orendt’s commitment to the role
is absolute and unceasing, and he sings with ardour and directness – even
when hovering upside down from a harness, demonstrating a physical litheness
and strength to equal his vocal flexibility. The arioso of ‘Possente
Spirto’, the spiritual centre of the opera, gradually increased in persuasive
fervour and demonstrated the considerable extent of Orendt’s vocal and
musical resources; it was a pity, therefore, that his lyre – embodied by the
two obbligato violins whose decorations embrace Orfeo’s appeals –
was not given more prominence, for the violins’ elaborate ornamentations
surely encapsulate La Musica’s opening assertion that she can charm mortal
hearing and thus inspire human souls to attain the sonorous harmony of heavenly
concord.

The nine postgraduate singers from the Guildhall vocal department acquit
themselves well as the chorus but they and the musicians of the Early Opera
Company – who play superbly under the direction of Christopher Moulds –
feel a little removed from the drama, nested as they are at the rear of the
large circular stage.

Boyd has relied on his dancers to recreate the excitement and anticipation
which must have been experienced by the members of the Accademia degli
Invaghiti in February 1607, but in so doing he somewhat neglects the
musico-dramatic core of the opera. The final image of the anguished Orfeo,
suspended between heaven and earth, is striking and moving. But the human and
spiritual love which is embodied in Monteverdi’s score has been overshadowed
by the visual and the physical. One might wish that Boyd had more consistently
conjured the spirit of La Musica’s opening words: ‘I am Music, who with
sweet melody know how to calm every troubled heart, and now with noble anger,
now with love can inflame the most frozen minds.’