A legacy of ousted Montpellier general director Jean Paul Scarpitta, the staging of Mozart’s first operatic masterpiece remained entrusted to Scarpitta’s assistant Jean-Yves CourrÈgelongue. Both Scarpitta and CourrÈgelongue are stage directors whose artistic formations were with Robert Wilson. Both have developed strongly individual voices, Wilsonesque only in so much as they both cultivate an extreme minimalism. Of these two Montpellier directors CourrÈgelongue is more imagistic, Scarpitta is more satiric.
CourrÈgelongue and his designer Mathieu Lorryy-Dupuy used a chair, a curtain, a table and a swimming pool to bring alive Mozart’s tale of sacrifice. This was not to update an ancient story’s Baroque retelling so much as it was to purge a Mozart masterpiece of extraneous, misleading detail (the trappings of an anachronistic opera seria for example) and to make it what it is — a dramatic action in music, and nothing more.
And yes, there was still the spectacle that is so strikingly created in Mozart’s score. It was squarely minimalist where less is more — an all the more terrifying appearance of the beast of the deep in the symbolic form of a sacrificial table exploding in white light. High tension had already been created in the blackouts that exploded into the sudden appearances of Idomeneo and later the crowds of terrified Cretans.
CourrÈgelongue hit sacrifice hard, depriving the opera of its obligatory happy ending. Elettra not only longed for death, she sacrificed herself to the love of Ilia and Idamante holding the sacrificial knife and disappearing through the crowd into swimming pool.
At last the gods having been appeased and the crowd having cleared the pool of detritus (plastic bags, old tires, etc.) deposited by the storms, Elettra’s body, victim of the opera’s emotional storms, was retrieved and laid out to Mozart’s orchestral epilogue. The sacrifice we had fought all evening had become real, it was a sacrifice more real to us than the averted opÈra seria mythological filicide. And it was pure Mozart.
In Idomeneo the young Mozart had made an immensely powerful opÈra seria, and here we discovered a hidden depth of humanity to surprisingly illuminate this masterpiece. It was fully realized musically in Montpellier by French conductor SÈbastien Rouland whose considerable career seems to be centered in big house productions of Baroque repertory (contemporary perspectives, not historical re-creations).
Mo. Roulard brings bite and high drama to Mozart, suppressing the neo-classicism (balance of tension and relaxation) that informs the symphonic Mozart and his soon-to-come comedies. The appropriate (reduced) forces from the Orchestre National de Montpellier eagerly responded to the maestro’s demand for edgy tone and sharply defined shapes. The orchestra melted into transparent pianissimos for the prayer of Idomeneo creating transcendent musical magic, then roared with frustration in Electra’s final aria. Rare sonorities of orchestration sang out, most notably the fine horn quartet. 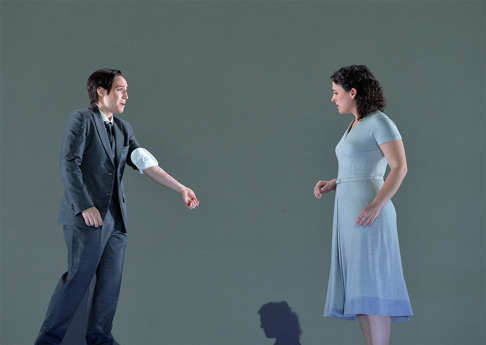 Anna Manske as Idamante, Marion Tassou as Ilia
Mo. Roulard’s tempi were at once dramatically pointed and solidly within reach of the young cast. The three women were well matched in vocal color and accomplishment. Ilia was sung by French soprano Marion Tassou with beguiling purity of tone, Idamante was sung by Austrian mezzo Anna Manske who found a charming male/female compromise, and Elettra was sung by Swiss soprano ClÈmence Tilquin who raged with conviction in her aria begging for death. Robert Wilson costumer Yashi (single name) provided a simple dress for Illia, a shapely male business suit for Adamante and a slinky pants suit for Elettra, simple attire that spoke volumes about character.
The male voices were under par for a Montpellier Mozart opera, all over-parted, i.e. either unable to fulfill Mozart’s vocal demands or too inexperienced to be convincing, or both. An announcement was made that American tenor Brendan Tuohy as Idomeneo was “soufrant” and would not be at his best. While an appropriately imposing figure as Idomeneo his lack of experience to take on a major role on an important stage was glaring.
Michael Milenski