However, when it comes to productions, I cannot help but think that it increasingly obscures rather than aids understanding. Where, after all, has the production been in the mean time? Hades?
More to the point, though, I think we tend to underestimate, at least in many cases, the role of the revival director. (The often problematical ‘repertory system employed in many German theatres is a different matter; I am thinking here of theatres operating according to what is essentially a stagione principle.) In this particular case, Daniel Dooner seemed to make a better job of ‘reviving’ Tim Albery’s production of The Flying Dutchman than Albery had made of presenting it in the first place. Or was it a matter of a better-adjusted cast? The one does not exclude the other, of course; indeed, the two are not unlikely to have been related. 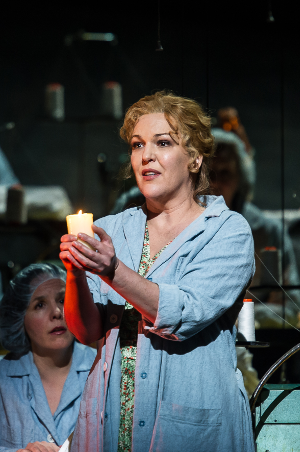 Adrianne Pieczonka as Senta
The 2009 ‘premiere’ had greatly disappointed, eschewing Wagner’s interest in myth for a form of dreary realism, quite out of place and seemingly determined — understandably, I suppose, given its misguided premise — to downplay the figure of the Dutchman as much as possible. It did not make sense and it did not involve. The irritants have not entirely gone away, especially during the third act, in which the drunken antics of the townsfolk — here, it must be admitted, very well portrayed by the chorus and Ed Lyon’s Steersman — still seem to be far too much ‘the point’. But they are counterbalanced and, on occasion, supplanted by a stronger sense of the Dutchman’s plight and its consequences. ‘Revival’ seems something of a misnomer for a hugely beneficial shift of emphasis, unless we mean that the work itself experiences something of a revival — which, I think, it does, at least vis-‡-vis its outing six years ago.
Bryn Terfel’s performance certainly seems less ‘revived’ than brought to life for the first time. In 2009, he had disappointed perhaps even more than the production. There were still occasional unwelcome tendencies towards crooning, especially towards the end of his first-act monologue. They were occasional, though, and Terfel followed up his excellent Proms Walk¸re Wotan — almost certainly the best thing I have heard him sing — with a world-weary Dutchman who, moments of tiredness aside, yet had powers of something mysterious in reserve for when the moment called. This time the words were not only crystal-clear- always a formidable weapon in Terfel’s armoury — but invested with a true sense of dramatic meaning.
Adrianne Pieczonka’s Senta was at least his equal in terms of dramatic commitment; arguably, this thrilling, unmistakeably womanly performance went still further. I say ‘womanly’ since this was a reading that seemed thoroughly in keeping with a recent, welcome understanding of Wagner’s earlier heroines to be more than virginal male projections. Peter Rose made the most of Daland’s character: venal, yes, but also looking to the future for his daughter as well as himself. Michael Kˆnig offered an alert Erik, Catherine Wyn-Rogers a properly maternal Mary. Often threatening to steal the show was Lyon’s Steersman, as fine a portrayal as I can recall: an everyman, perhaps, but one with agency, for which verbal and musical acuity alike should be thanked. 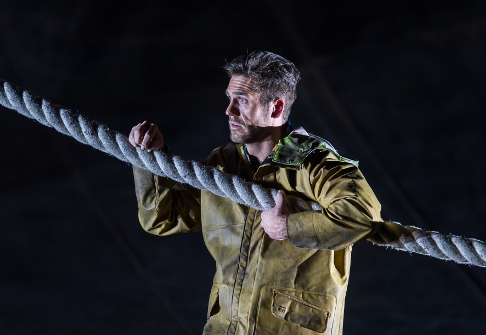 Ed Lyon as the Steersman
Andris Nelsons’s conducting for the most part brought out the best from the Orchestra of the Royal Opera House. However, the interpretation as a whole did not seem quite to have settled; I strongly suspect that subsequent performances will impress more. The Flying Dutchman is a difficult work to bring off; despite fashionable claims for overplaying its (alleged) antecedents, it really works best as a whole when viewed, as Wagner would later do so, in the light of his subsequent musico-dramatic theories. Senta’s Ballad may not originally have been its dramatic kernel, but it has become so. Nelsons sometimes seemed unclear which way to tilt, especially during a drawn-out Overture, whose extremes of tempo threatened to negate any sense of unity. There were sluggish passages elsewhere: not hugely drawn out, but enough to make one wonder where the music was heading. The third act emerged tightest, and may well be a pointer to what audiences will hear later in the run. Choral singing was not entirely free of blurred edges, but there was much to admire, and again, I suspect that slight shortcomings will soon be overcome. This remained an impressive ‘revival’, all the more so, given its manifest superiority to the production’s first outing.
Mark Berry