(The Metropolitan and Seattle operas production directed by Stephen Wadsworth made it to Live in HD in 2011, and Robert Carsen’s 2006/2007 production was seen in San Francisco and Chicago.)
Gluck’s 1779 opera is a strange work, its libretto based on the 1757 tragedy of the same name by Claude Guimond de la Touche who had lifted entire sections of his play from earlier opera librettos based on Euripides’ tragedy Iphigenia in Taurus. La Touche was a Jesuit for 14 years, but left the order to be a full-time poet.
Gluck’s French operas are through-composed solemn events, well respected in the troubled times that lead to the French revolution. But Gretry’s comic operas of the same moment with spoken dialogues and pretty airs were far more pleasurable to audiences. Maybe some of Gretry’s easy sentimentality made its way into Gluck’s tragedy in the questionable relationship between Oreste and his companion Pylade. The 1997 Glimmerglass production simply made them lovers.
If the Carsen production was dismissed as euro-trash by a critic on Resmusica* (blood covered walls, all actors in black tunics), and the Wadsworth production according to the critic on The Classical Review seemed fearful that its audience might be bored (hyper-ventilating ballets) the new Geneva production hits the nerve center of the opera by listening to the music. The production hears its solemnity, participates in its individual dramas, and illustrates its pantomimes — there is not a single second when the stage action departs from the absolute directness of the storytelling. The Gluck genius was to make music drama, and it was pure in Geneva. 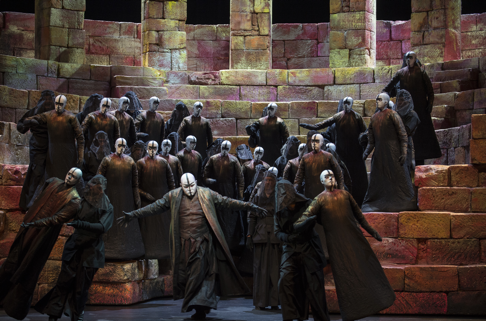 Alexey Tikhomirov as Thoas and male chorus puppets
Gluck’s rediscovered tragic unities are relentlessly upheld in this production staged by German born, culturally French informed stage director Lukas Hemleb and Berlin born, European and American formed sculptor Alexander Polzin. There was no ballet. Instead every principal actor had his double. A life-size puppet. Every blacked-out chorister, forty of them, held his life-size, black puppet. The set, astounding in scope, was a heavy Greek theater made of huge cut stones. It too had its double, an equal construction that had been yanked from the earth, suspended above the stage for the final scenes of the opera.
The concept was to step back from action, to allow the actors react to the story and to themselves as the story unfolded. Body movement was abstractly linear, the movement of mechanically motivated limbs. The results were constructions of motion that mirrored the brutal melodic lines of this morbid tale, and the abruptness of harmonic and theatrical structure, The actors were the music, and it was always a theater, theater itself, that we saw, and felt, from within and from without.
For the third act there was no set, only a bowl in the middle of the stage into which plummeted bits of the presumed dead Oreste. Oreste was Italian baritone Bruno Taddia who in the second act had fallen away from his puppet double onto the forestage to deliver, alone, his agonized recitative “Dieux protecteurs de ces affreux rivages!” In the emotional immediacy, rare in Gluck, of this outburst he became his puppet, moving in jerks and spasms as if operated by an exterior force. This force was Gluck’s music and the tragic muse. 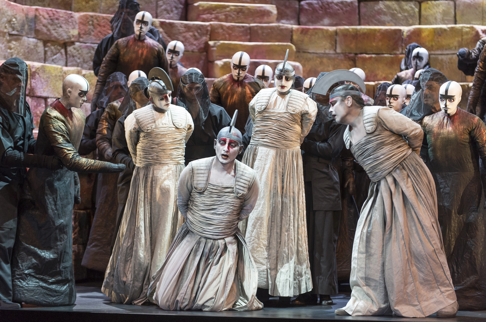 Bruno Taddia as Oreste, Steve Davislim as Pylade, their puppet doubles
Mr. Taddia gave an over-the-top performance in warm, secure voice. His extreme performance was matched to a much lesser degree by the IphigÈnie of Italian soprano Anna Caterina Antonacci (remember that this was a Maria Callas role so the stakes are already impossibly high). Her physical involvement was gratefully more measured (much more) than that of Mr. Taddia, her voice securely if not easily or opulently carved Gluck’s emotional recitative “Je cede ‡ vos dÈsirs” and air “D’une image, hÈlas, trop chÈrie!”
Oreste’s companion Pylade was sung by Australian tenor Steve Davislim. At the final performance, perhaps exhausted from the run of six performances this fine artist was unable to take his air “DivinitÈ des grandes ‚mes” to its melodic heights, though it was otherwise sung in beautiful voice. Pylade, unlike Oreste and IphÈgenie is tormented only by human love (for Oreste), and not by divine forces.
As the tyrant king Thoas bass Alexey Tikhomirov threatened appropriately if without distinction compared to the powerful performances of IphigÈnie, Oreste and Pylade.
The proceedings were presided over by Dresden born conductor Hartmut Haenchen, who magnificently managed the score, integrating its orchestral, choral, balletic and solo voices into the tragedia messa in musica that Gluck imagined. It must be said that one did not hear the orchestra separately from seeing the stage. Gesamtkunstwerk indeed.
Michael Milenski