Totally confused by the Uzi bearing thugs [sigh] that herded distressed costumes on and off the stage, and, well, by the mezzo-soprano in concert dress standing extreme stage right (singing Idamante while voiceless mezzo-soprano Kate Aldrich walked the role on the stage) luckily I found the insert in the program book at the intermission that would enlighten me. The OpÈra de Lyon had come to a belated conclusion that this new production by German director Martin Kuöej (koooo-shy) might not make any sense.
Mr. Kuöej’s dramaturg, Olaf A. Schmitt, explained that Idomeneo lives in fear of the future established by the diminished chords of his Act II aria “Fuor del mar.” Furthermore that the D major tonality of this aria was the same as the first chords of the overture thereby establishing Idomeneo as the sovereign. The aria is old-fashioned, the da capo form, and this proves that Idomeneo is captive of an out-of-date, unchangeable system.
To make a long story short, Idamante is also captive, both the old and new sovereigns hold their repressive power by embracing and exploiting a religious system. This is proven because D major is obviously Idomeneo’s tyranny, and then this tonality is adopted by Idamante in his supplications to be sacrificed to the gods in order to save his people.
This rationale seems to have been constructed so that in the dÈnouement of the opera the resignation of Idomeneo may occur with him alone on the stage. He is writhing in emotional agony in what must now be a prison (the set was a revolving platform of repeating doors). He in fact has lost his power, and there has been no sacrifice. Furthermore the old, unchangeable order remains. The final celebratory chorus is grimly sung by drably dressed (old “Eastern-bloc”) choristers. At least they were not playing with the little fishes that had earlier served to demonstrate calmed waters. 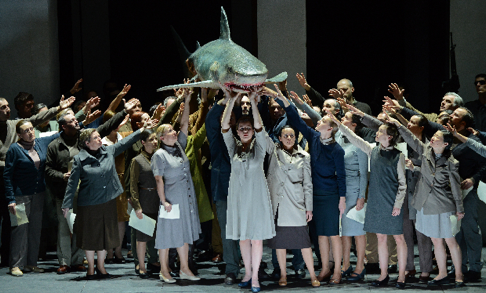 This sea monster of the first act gave way to the playful little fishes of the second act mentioned above
Did I get this right? More or less?
Well, it might have worked, and in fact the final Idomeneo scene was a powerful coup de thÈ‚tre that might have been convincing theater had the OpÈra de Lyon provided a persuasive cast of singers, and more than perfunctory conducting.
As it was the voiceless Kate Aldrich was the only convincing presence on the stage, this fine artist here acted this travesty role with surprising masculine force (she physically attacked Idomeneo when she wanted him to do her bidding — note how this supports Mr. Kuöej’s concept).
Mme. Aldrich in fact had the flu and could not sing (the flu had been passed around the cast, evidently you never knew who would be down for which performance). Her words were beautifully sung by Russian mezzo Margarita Gritskova who sometimes could not help becoming dramatically involved (musically). But we needed the artistic maturity of la Aldrich to make Idamante alive.
The balance of the cast, all fine singers, did not have the force of character or the physical presences to make a convincing case for this off-the-wall, politically naive, theatrically forced concept. It was a long, very long evening.
We can only shutter at our premonitions of what Mr. Kuöej and Mr. Schmitt may attempt with Mozart’s Die Entf¸hrung aus dem Serail at the Aix Festival this coming summer.
Michael Milenski