But ten years later, 1952, Kirsten Flagstad sang Isolde in Toulouse, in German of course. The then director of the opera, tenor Louis Izar was a celebrated Ring Mime, and the then mayor of Toulouse, Raymond Badiou himself was big friends with Wieland Wagner. Toulouse had become known as Bayreuth-sur-Garonne (the river that passes through Toulouse).
Tristan und Isolde however disappeared from the Theatre du Capitole after the 1972 production (Herbert Becker and Klara Barlow), not to reappear until 2007 in a production by Nicholas JoÎl, remounted just now with American tenor Robert Dean Smith as Tristan and Portuguese soprano Elisabete Matos as Isolde. At the first intermission a tall gentleman strode through the bar loudly proclaiming in hoch British that it was “better than Bayreuth.” 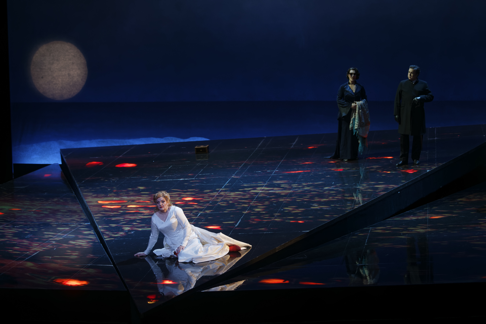 Elisabete Matos as Isolde
Most of us have not been to Bayreuth so we cannot know, but it was indeed certain that this Tristan was already an ultimate experience, and that was well before the Tristan delirium that was the musically shattering climax of the performance. The conductor was 62 year old, Leipzig born conductor Claus Peter Flor, known in the U.S. as the guest conductor of the Dallas Symphony (1999-2008). While no stranger to the opera pit his program booklet biography reveals him to be primarily an orchestral conductor.
The maestro concentrated his attention on the famed Toulouse orchestra, here strings 12/12/10/8/6, triple winds but 6 horns, with the full backstage complement of 6 horns and 3 each trumpets and trombones. There were two harps for the mesmerizingly beautiful second act love tryst, Brang‰ne gorgeously intoning her admonitions. The exquisite minor third trills of the clarinets had already laid the foundations for Wagner’s eternally quivering passions.
If seventy six orchestra players and two heroic voices can be said to whisper this was the intimacy of the second act. In fact the first act as well was developed in personal rather than mythical voices, the oboes, flutes and English horn working to color Isolde’s despair, Brang‰ne’s (in black spectacles) deception, and Tristan’s indifference. The first act love duet was surprise more than passion, preparing us for the musico-psychological treatise on nineteenth Romantic century love that was the second and third acts.
Metteur en scËne Nicholas JoÎl hovered between the real and the magical, his production sometimes staged and sometimes semi-staged. Wagner’s first act sailors were 8 supernumeraries [figurants] (the chorus was hidden) in formal concert dress (tails) who reappeared at the end of the opera as King Mark’s soldiers. The second act swords drawn, Melot’s thrust was symbolically received, Tristan fell, isolated on the other side of the stage. At the end of the opera Kurvenal’s thrust was symbolic, not actually touching the jealous traitor, Tristan’s friend Melot. 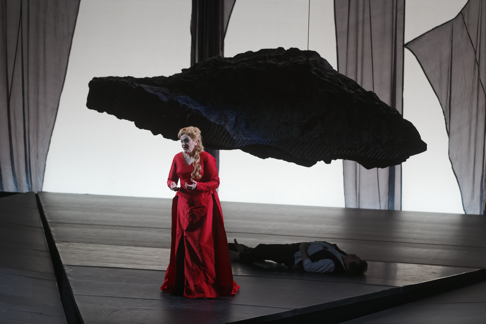 Elisabete Matos as Isolde, Robert Dean Smith as Tristan
Finally Tristan lying dead, Isolde rose, walked down stage center (the soldiers, the dead Kurvenal and Melot as well as King Mark had all slipped off stage). This was the liebestod for the brilliant-red gowned Isolde, in concert now. It was, as intended, a panegyric to love. It was not the end of an opera.
The coup de thÈ‚tre occurred at the beginning of the third act. The curtain rose on the wounded Tristan hanging over the front point of the now sharply elevated triangular center platform (the stage set was three platforms that in the first act had moved up and down as the wave motions of the sea). Arms and head dangling into the emptiness high above the orchestra pit Tristan remained there for maybe ten minutes (through the English horn solo and Kurvenal’s scene with the shepherd).
He awoke to deliver his great mad scene, always perched on this point, and somehow balanced philosophy with emotional rawness, rationality with irrationality. It was in this delirium that the maestro let loose with the great (and here the biggest) orchestral climaxes of the entire opera. It was the cerebral drama of this extended tract that made the JoÎl concept of Tristan become the masterpiece Tristan und Isolde is said to be — we both understood and felt love as if we were a Romantic poet.
Robert Dean Smith is of strong, secure and virile voice, his dramatic and musical intelligence apparent, well able to effect the considerable challenges of this mise en scËne. He has already established himself as one of the important Tristans of our day on the world’s important stages. Elisabete Matos has performed Isolde once before, in 2011 at Barcelona’s Liceu. In the prime of voice she is able to soar to and beyond the enormous climaxes never compromising her richly colored sound. Her familiarity with the great Verdi dramatic soprano roles lies under her Isolde, the liebestod far more intimate and personal than heroic. The vast emotional vistas and philosophic scope of this production were perfectly realized in her performance.
German mezzo-soprano Daniela Sindram well fulfilled the requirements of this production, her Brang‰ne a very present figure in Wagner’s conceptual preparations. Costumed in white German baritone Stefan Heidemann made a very present Kurvenal, his rather loud, darkly colored voice a welcomed contrast to the refined Heldon tenor tone of Robert Dean Smith. German bass Hans-Peter Kˆnig was a perfunctory King Mark.
Conductor Claus Peter Flor created this remarkable musical vision that fulfilled the complex theatrical vision of Nicholas JoÎl. The stage and pit were remarkably synchronized, the maestro focused on his orchestra, the stage very sure of itself.
Michael Milenski