But Jose, unlike Aida’s RadamËs, is actually the star of the show, Carmen herself is a cameo role, three brief songs, then thrown around a bit and finally stabbed, throttled or drowned depending on directorial humors. In Orange Carmen was one of the unusual interpreters of the role — Kate Aldrich.
Mme. Aldrich once brought the shine of Kansas to Carmen’s Seville (San Francisco Opera 2007) but this estimable artist has matured in Europe where she has embraced the soprano bel canto repertory with great success. Cast now in Orange a bit after her Carmen period the role is still well in her voice and she still makes Carmen a magic presence by sheer vivacity of personality, as she had in San Francisco. It is not a Carmen based on sultry sexiness.
It was a lively night in the 2000 year old ThÈ‚tre Antique despite the 37C/100F temperature. Normally at a ChorÈgies performance there are a few spectators (among the 10,000 or so) who are carried out on stretchers — the steps are steep, the audience aged and much wine has flowed at the hundreds of festive dining tables spread out in the streets of the old town. But no one was going to miss out on this famous tenor doing this famous role. 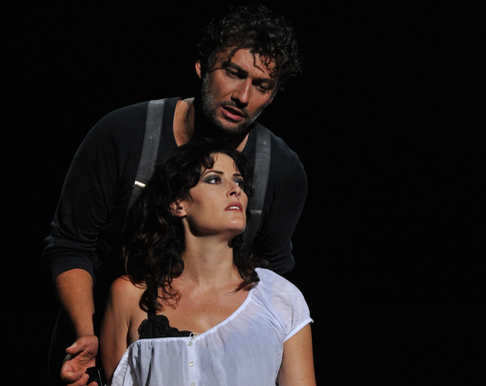 Jonas Kaufmann as Don Jose, Kate Aldrich as Carmen
Photo copyright Gromales, courtesy of the ChorÈgies d’Orange.
Given that expectations were inordinately high a couple of boos were heard through the polite applause for the “Habanera.” But that was before we (many, many of us in the audience) became aware that conductor Mikko Franck had indeed transformed Bizet’s fiery opera into a lovely symphonic tone poem. It was of great orchestral personality above all else, and of an inexorable deliberateness of musical exposition. The pit was absolutely detached from the stage.
Upon his re-entry into the pit after the intermission this conductor was met with a resounding chorus of boos (mine included). Mr. Franck conducted seated in an arm chair (yes, there really were arms) seldom glanced at the stage, made the instrumental duets with the singers into brilliant solos for the very fine players of the Orchestre Philharmonique de Radio France (the third act intermezzo for flute was coyly playful rather than the expected flowing reverie), destroyed the quintet with sluggishness, dragged down MicaÎla’s aria with agogic elaborations in his accompaniment. Not to mention that the usual impeccable ensemble of the always huge chorus with the pit was painfully missing.
What seemed illuminated orchestral playing at the commencement of the evening — evoking once again admiration of the surprisingly acoustic of this fine old theater — soon became annoying, and in the end belayed the adage that Carmen is indestructible. But had not Mr. Franck, music director designate of the Orchestre Philharmonique de Radio France, destroyed it, the staging of Louis DÈsirÈ would have accomplished this singlehandedly. 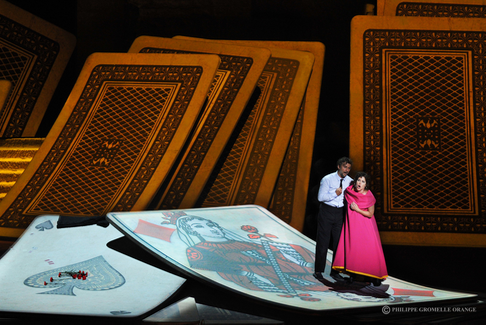 Kate Aldrich as Carmen, Jonas Kaufmann as Jose, Act IV
Photo copyright Abadie, courtesy of the ChorÈgies d’Orange.
Mr. DÈsirÈ, who gave us a splendid Tosca in Marseille last spring, evidently determined that the 300 foot expanse of the ThÈ‚tre Antique stage prevented all possibility of realizing the physical drama messieurs Meilhac, HalÈvy and Bizet had imagined. His solution was to make Carmen an oratorio, the identically costumed choristers frozen in blocks, the only physical actions were changing the placements of the famous scenes from one playing area to another (delimited by the surfaces of several huge face-up playing cards, a scattered deck being Mr. DÈsirÈ’s scenic concept).
All was not lost however because we did have the fine Don Jose of Jonas Kaufmann. Not that this tenorissimo is a real Jose — his voice is heroic, his delivery refined, his musicianship impeccable. Mr. Kaufmann is a remarkable singer with technique that allows him opportunity to explore and vocally exploit roles that are successful even when delivered monochromatically. In some ways Mr. Kaufmann and conductor Franck were an extraordinary musical match. Like conductor Franck he achieved an elegantly expanded rather than an eloquent performance.
Physically Mr. Kaufmann’s Jose was scruffy and well acted, hardly the handsome matinÈe idol of his publicity photos.
MicaÎla was sung by 50 year-old Inva Mula, her great experience and confidence triumphing above the over-refined pit, her “Je dis” expansively and knowingly delivered diva style. It was deservedly well appreciated by the audience. Escamillo was sung by Kyle Ketelsen, the Aix Festival’s nimble Leporello and Figaro. He brought a lively wit to this Escamillo that was beyond the scope of this oratorio context. One can only dream of Mme. Aldridge and Mr. Ketelsen in a theatrically informed Carmen in a small theater or maybe even in the huge ThÈ‚tre Antique with a conductor and stage director who know that opera is, well, opera.
Michael Milenski