Quite why is anyone’s guess; no one, I assume, would declare Die
schweigsame Frau a greater work than Elektra, but it is clearly a
better work than so many that continue to hold the stage. German theatres are
different, of course, not least those associated with Strauss personally, so to
see Strauss’s collaboration with Stefan Zweig and, at one remove, Ben Jonson,
a visit to the Munich Opera Festival seemed like a good idea. 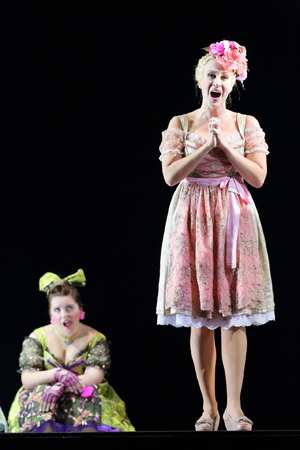 Tara Erraught as Carlotta and Brenda Rae as Aminta

And so it was. One could not reasonably have hoped to hear Strauss in better
hands. Not only could I find no grounds to fault Bavarian State Orchestra —
not that, in imitation of the third act’s divorce proceedings, I was
attempting to find such grounds — the orchestra reaffirmed its credentials as
a Strauss orchestra to be spoken of in the same breath as Dresden and Vienna,
and arguably more reliable than either, certainly more so than the latter.
Precision and warmth — though not too much — were very much the hallmark of
this performance, wisely guided by Pedro Halffter, who seemed keen to impart to
his account a sense of, if not quite Neue Sachlichkeit, then at least
of something that made Strauss’s writing here particular rather than
generalised. Pacing was impeccable, quasi-autonomous musical structures coming
fruitfully into contact with verbal demands: the sort of thing one longs for,
generally in vain, in Rossini. The Straussian orchestral phantasmagoria is
never far away, of course, but there is perhaps less overt dazzle in much of
the score than in, say, Rosenkavalier or Elektra; Halffter
and the orchestra appreciated its subtleties and responded to them in equally
subtle yet undoubtedly sure fashion.

I doubt that Brenda Rae’s Aminta could be bettered in any theatre today
(although how would one know?) Just as sure of note and line as the orchestra
and with greater, contrasting warmth, especially at those wonderful
revelations, through the disguise of Timidia, of the fundamental humanity of
Aminta, this was a performance to savour. Much the same could be said of her
partner in crime — and love — Peter Sonn’s splendidly lyrical, often
imploring Henry. Franz Hawlata’s Morosus was very much a character portrayal:
too many notes, as it were, lacked a little when it came to the demands of
intonation. But such was Hawlata’s identification with and communication of
the role, it would be churlish to complain unduly; the audience responded
warmly, and it was right to have done so. The quicksilver vocal and dramatic
qualities of Nikolay Borchev’s Barber — despite the hideous green tracksuit
he initially had to wear — were rightly appreciated by the Munich audience
too. Okka von der Damerau captured to near-perfection the disapproving,
ultimately amusing qualities of the Housekeeper. There was depth in the casting
too: splendid rivalry to Timidia came from Tara Erraught (with, insofar as I
could tell, a fine line in Bavarian dialect) and Elsa Benoit. There was indeed
an excellent sense of company: no one disappointed and almost everyone shone. 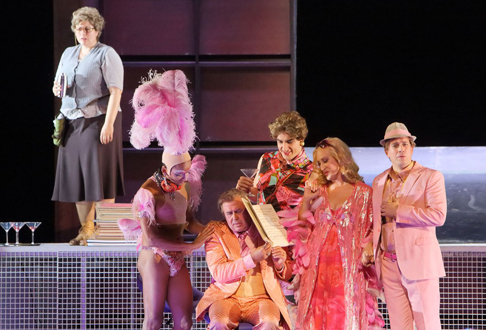 Barrie Kosky’s production: well, it was considerably better than his Berlin
Figaro. But I cannot help but think that his matching of high camp
— the tasteless pink designs of the first part of the third act, splendidly
realised on their own terms by Esther Bialas — and custard-pie slapstick is
not really a match for Strauss, or for Zweig. The subtle, even sometimes
not-so-subtle, Êstheticism of both artists may well benefit from
deconstruction. But might not a production that takes to heart the
circumstances of the opera’s composition — this, after all, was the opera
occasioning Strauss’s fateful letter to Zweig, intercepted by the Gestapo,
which led to Goebbels having the composer resign from Presidency of the
Reichsmusikkammer — offer a more fruitful, deeper (yes, I know, how Teutonic
of me!) mode of questioning? There is no doubting the skill with which Kosky
and his production team accomplish their vision; I wish, though, that I could
discern more in the vision itself. According to Kosky, quoted in the programme,
‘We have placed our protagonist in a world which swings
[schwankt]uncertainly between Mel Brooks, the Muppets, and
Vienna’s Josefstadt [Theatre].’ Make of that what you will.

Even for those of us who remained sceptical about the production, however,
there was much to enjoy, for which many thanks should go to the Bavarian State
Opera. This would surely make an interesting prospect for ENO, whose Strauss
record has recently been anything but conspicuous, to bring to London. Now, how
about an enterprising company offering us Salieri’s Angiolene, also
based (loosely) on Jonson’s Epiocene? Or even a hearing for Mark
Lothar’s 1930 Lord Spleen, written for Dresden? (Does anyone know
the music of Lothar, a Schreker pupil whom Max Reinhardt enlisted as Music
Director for Berlin’s Deutsches Theater in 1933, whether for this or for
anything else? I freely admit that I do not.) George Antheil’s
Volpone, which apparently owes a good deal to Zweig’s German
adaptation of Jonson’s play, also awaits revival. And yes, more Strauss would
be much appreciated too: Feuersnot, Friedenstag, Die
Liebe der Danae, etc., etc. Opera houses of the world, unite: you have
nothing to lose but Timidia’s timidity!