Like Nobel Prize winning (1991) poet Octavio Paz composer Wolfgang Rihm is at once a neo-modernist, a surrealist, an existentialist and an esotericist both as a composer and a librettist/poet. More than likely he and his collaborator for this production, stage director Peter Konwitschny are not like Artaud who discovered and devoured peyote during the year he lived in Mexico. There is no way a creation like The Conquest of Mexico with its complexities of concept, of sound and of staging could have been realized without absolute clarity of intellect and solidity of purpose. It was an evening of cold calculation.
What messieurs Rihm and Konwitschny do share with Antonin Artaud is cruelty. It was an unpleasant sometimes disgusting, too long evening that forced you to admire the resources of theater and the skill of execution, an evening that transported you finally to a plain of existential comprehension, this a place you would never dare attempt on your own — too scary. And this was the pleasure perpetrated by the opera, and this pleasure was finally enormous.

The back wall is the arcades of the Felsenreitschule (Summer Riding School) carved into the Salzburg mountainside that is now part of one of the three adjacent theaters of the Salzburg Festival, plus the wrecked cars and apartment of the production.
The Conquest of Mexico is a star vehicle for baritone if ever there was one. In this case it was Bo Skovhus who was Cortez, or in Artaud parlance the male principle. His inherent masculinity was blatant, this is not at all a personal compliment. He climbed through a massive pile of dirty wrecked cars (evidently Mr. Konwitschny’s male principle metaphor) to arrive at a sterile box with a window and a sofa and a door to a kitchen (Mr. Konwitschny’s female principle metaphor to represent Mr. Rihm’s idea of the new world — an opposite world). Montezuma was sung by soprano Angela Denoke whose blond presence was difficult and calculating. It was either rape or it was not but finally it was, the issue of copulation was the neuter world of computer games. 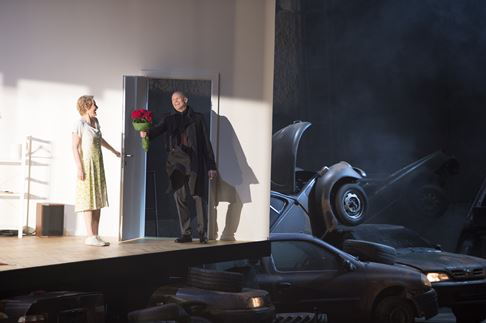 Angela Denoke as Montezuma, Bo Skovhus as Cortez
Before all festival performances the audience gathers in front of the festival theaters for one last aperitif before the performance. Any performance at the festival is a dressy event but you did notice more than the usual number of men in tuxedos, unusually they were young men (the festival audience is mature). Well, at a certain moment (intense noise) these thirty-one young guys rushed down through the audience, clamored onto and over the wrecked cars and finally crashed onto the stage where they provoked a beer blast, cheered on first male oral sex then the ugly rape, and finally slobbered over six scantily clad m‰dchen and a shinny red Porsche. 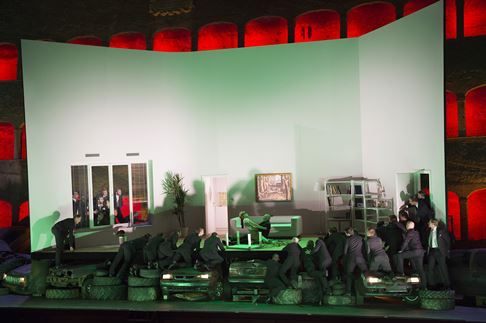 The tuxedo dressed Spanish soldiers
Bo Skovhus killed Angela Denoke (it was that real), then killed himself (in fact this was a very moving, extended scene). But Mr. Skovhus and Mme. Denoke aka Cortez and Montezuma did come together posthumously. They were seated side by side but not touching to sing the a cappella duet that ends the opera, It was the full exposition of Artaud’s neuter.
Did I get all this right?
There was a sizable ensemble of lower voiced instruments in the pit (violas and cellos, bass clarinet, contrabassoon, harp, piano and lots of tom-tom drums, etc. There was a primary conductor, Ingo Metzmacher, plus a second conductor who seemed to be only interested in the stage. There were two far-away orchestras of percussion instruments and brass instruments and a violin seated on an old truck-tire on each side of the wide stage. It was loud, very loud, then louder with a huge compliment of microphones and speakers. It was ugly music. It was meant to be.
In the pit as well were two male Speakers who spent the first part of the evening sitting in the pit making various weird noises with there voices, and a soprano seated in the pit house left who sang very high, freakish notes from time to time, and in the pit on house right a mezzo-soprano sang very low notes from time to time. And from time to time these four singers climbed out of the pit onto the stage, and climbed over piles of tires and wrecked cars to help out Cortez and Montezuma on the stage.
It was a fun evening.
For a formal exposition of the genesis of this work go to the Salzburg Festival website About this production .
Michael Milenski