Surely its raison d’Ítre on the schedule was the availability of bass-baritone Eric Owens, who made a triumphant debut in the title role. Mr. Owens possesses one of the great voices of our time. While he was announced as indisposed, it made no matter as he lavished the part with rolling, refulgent tone and infused it with uncommon intelligence and heartfelt subtext.
He was mesmerizing in his dramatic focus, and his anguish was almost pitiable save for his unhinged commitment to cold-blooded murder. Eric went from strength to strength all evening long, with his gorgeous dusky approach to Pieta, rispetto, amore earning the boisterous ovation it prompted. Macbeth’s tragic death scene (not always performed) was masterfully calibrated, invested as it was with nuance, build and pathos. This was a noteworthy role assumption by a singer at the top of his game.
No less accomplished was the Lady Macbeth of Melody Moore, who set a new gold standard for interpreters of this fiendishly difficult part. Ms. Moore is possessed of a rich, round, gleaming tone that not only caresses legato phrases with ease, but also fires off incisive coloratura and accurate trills seemingly at will. Her take on the role as an aggressive, manipulative spouse, was febrile, feline, fierce and every other manner of F-word. 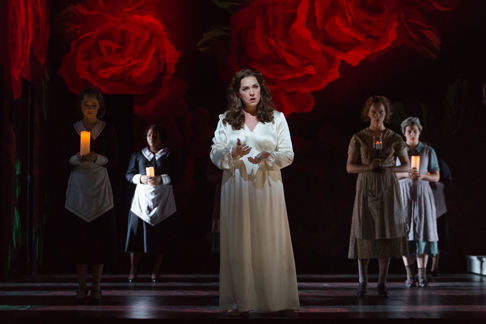 Melody Moore as Lady Macbeth
Her seething determination in La luce langue, her incorporation of a stooped primal posture, all clenched fists and coiled spring, was electrifying. She almost made you wonder how one so strong could ultimately go so crazy! The haunting, hollow filigree of sound that Ms. Moore summoned in the great Sleepwalking Scene was chilling and utterly secure. Hers was a remarkable achievement.
In that same Sleepwalking scenario, the soprano was ably supported by the distinctive mezzo of Mithra Mastropierro as the Lady-in Waiting, and the warm baritone of Nathan Milholin as the Doctor, both Young Artists of fine promise.
Soloman Howard as Banquo is a young bass of tremendous stature and polish. Mr. Soloman already has the warmth and breadth of tone of a Simon Estes, and the easy, burly spontaneity of a Bryn Terfel. His tall, lean stature conveys an imposing presence, and he internalizes the part, so that we empathize with his character’s concern. Soloman has a potent vocal presence, and his vibrant, imposing, dark tone is even and solid. If the top occasionally gets a bit diffuse, he certainly sings higher phrases easily and convincingly. His rendition of Come dal ciel precipita was another production high point. Soloman Howard is a star on the rise.
Michael Brandenburg has an appealing, pointed tenor with an assured technique and an effortless delivery. A la paterna mano was beautifully intoned, and he certainly has the role in his throat. Now I would only urge him to loosen up a bit emotionally and get it in his heart. Marco D. Cammarota’s meaty tenor has presence, ping, and assertiveness. Both of these fine artists reflect great credit on the company’s Young Artist Program. 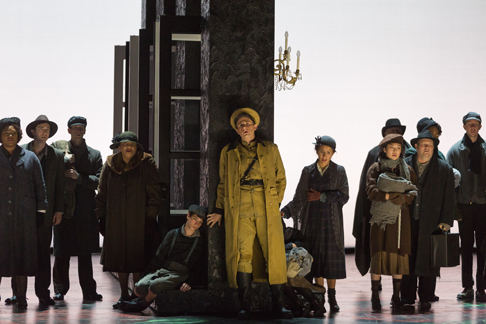 Michael Brandenburg as Macduff
And that program’s fresh, shining voices contributed some pretty impeccable choral singing. Of necessity, the tradeoff is that some maturity and gravity of tone got lost. But Chorus Master David Moody elicited absolutely clean diction and impressive dramatic intent. The outstanding ensemble work had balance and an admirable unity of purpose.
Joseph Colaneri conducted with forward motion and authentic style. The Maestro never over-indulged the bathos and horror. His very brisk opening statements, and pulsing undercurrent to the floated, ethereal strings established his approach to the score. The orchestra exhibited excellent ensemble work, but there were also beautiful solo passages that mirrored the drama on stage. Maestro Colaneri was a willing partner in the breathless finale to the Macbeth-Lady duet as they scurry off stage after the murder of the King. I have heard some wonderful orchestras here over the years, but this was arguably the finest idiomatic playing I have yet heard from Glimmerglass pit.
James Schuette’s Set Design was mysterious yet multi-functional. Center stage is a wall unit that revolves to reveal an exterior and interior of an early 20th Century upscale mansion. It is contained by a box set with three entrance doors on each side, decorated with huge cabbage roses. At times, these images convey hominess and warmth, but at others they chillingly turn blood red thanks to Robert Wierzel’s vibrant lighting design. Mr. Wierzel has conjured up a wonderful bag of tricks, witness the beautiful isolation of Banquo’s ghost, and the stunning effect that makes the set almost look as though it were lit from within. 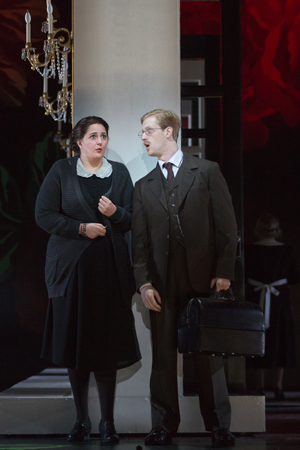 Mithra Mastropierro as Lady-in-Waiting and Nathan Milholin as Servant
The upstage walls can part and slide open, facilitating some beautiful backlighting effects, such as the beautiful silhouette of the chorus as they sang Patria oppressa. Mr. Schuette’s and Beth Goldenberg’s effective costumes conveyed station as well as hierarchy. I especially loved Duncan in his snooty top hat, overcoat, and gloves, which he removed deliberately and unctuously passed to the servants.
Director Anne Bogart has devised a personal and pervasive concept for the “Scottish Play.” She seems to have felt that the whole drama is played out in Macbeth’s mind. In the very first scene, the title character and Banquo enter shining flashlights hither and thither as if to look for clarity in the corners of Macbeth’s troubled mind.
One problem with this is (just as Jack Nicholson in The Shining) Macbeth seems kinda nuts from the beginning. He is therefore somewhat robbed of his journey. That said, the flashlight conceit paid off good dividends when Macbeth used it as “the dagger he sees before him.”
I quite liked the surreal concept of the refugee ladies who enter through the house during the prelude, and then become the witches. I wish the concept had gone even further in developing the women as omnipresent symbols. The use of the female chorus as set pieces in the Sleepwalking scene was inspired, with them holding candles as living “columns” that twisted and turned as facets of Lady Macbeth’s twisted mind.
Ms. Bogart forged highly specific character relationships, and facilitated outstanding ensemble work in which everyone seemed to have crafted and sustained an individual persona. The chorus was masterfully used in creating living tableaux.
Perhaps she allowed a bit too much moving about of furniture, which was sometimes brought on only to promptly be taken off again. But I loved her send-up of the soldier extras madly running through the doors of the wall, in a demented child’s game of war as though Macbeth had become totally unhinged.
The directors’ second witches’ prophecy scene was a mastery of groupings, and featured inventive use of props. The procession of primitive ritual dolls, family portraits, crests, et al, to terrorize Macbeth was highly effective, indeed the best solution I have ever seen. I also appreciated the suggestions of primitive ritual, like when the stick-wielding assassins circled Banquo with stylized, ominous motion.
No doubt about it, this Macbeth was a notable jewel in the crown of this 40th Anniversary celebration.
James Sohre