What is Manon Lescaut really about? The AbbÈ PrÈvost’s 1731
narrative was a moral discourse. Unlike many modern novels, it wasn’t a
potboiler but a philosophical tract in which the protagonists face moral
dilemmas.

In this production, key excerpts from PrÈvost are shown at critical points,
not just during the Intermezzo. These are important because they underline the
origin of the opera, and its deepest values. The staging is black and white,
lit like an interrogation room, for such is its fundamental rationale. It’s
not a potboiler, not sentimental. but an uncompromising warning against the
seduction by false values like wealth, glitz and short term shallowness. It
says much about some audiences that they’d prefer things the other way round. 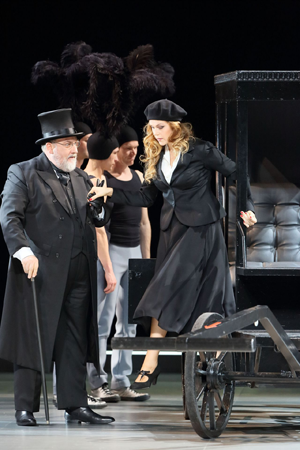 Hans Neuenfels’s production, with designs by Stefan Meyer, captures the
spiritual state of flux that is so much part of Puccini’s opera. The action
moves from place to place but the underlying theme is bleak. The journey starts
at Amiens, a faceless place where everyone’s en route to somewhere else. One
characteristic of Neuenfels’s style is the way he uses crowds. In his
Lohengrin for Bayreuth (read
more here), the people of Brabant were shown as rats, since rats conform,
but Neunfels treated them not as vermin but with sympathy and warmth. In
Manon Lescaut, the townsfolk have garish makeup suggesting Georg
Grosz-like malevolence beneath their well-padded uniforms. Anonymous figures
appear, zipped up in body bags. Not “belle, brune et blonde” but
dehumanized creatures, being trafficked, presumably to America. Suddenly, the
casual, flirtatious bantering feels dangerous.

Neunfels’s use of crowds also serves to highlight the central characters.
Des Grieux (Jonas Kaufmann), Manon (Kristine Opolais) and Lescaut (Marcus
Eiche) stand out in sharp black and white, in full focus. This is luxury
casting, and so they should shine. Kaufmann and Opolais “own” these roles
these days If anything, they were singing with even greater intensity than they
did at the Royal Opera House production last year. Kaufmann’s portrayal was
exceptionally deep, enhanced by Neuenfels’s emphasis on the moral and
philosophical basis of Des Grieux’s dilemmas, which are inherently dramatic
in themselves. 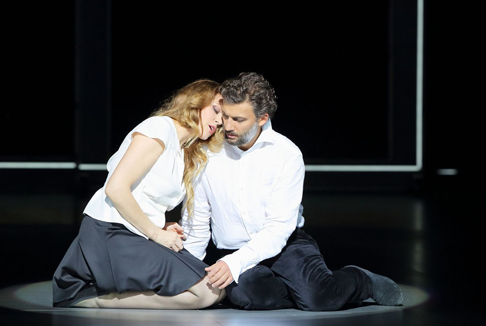 In most productions, Manon’s beauty steals the show. When Anna Netrebko
pulled out of the part, many sighed with relief, since Opolais has the artistic
courage not to need to be seen at her finest. When she sings, she creates a
real Manon with all her insecurities and complexities. She dares depict
Manon’s inner ugliness, because she can also show her true beauty. Opolais
may look tense in the first act and ravaged in the last, but that’s all the
more reason to admire her integrity. As she lies on the hard, bare stage that
depicts the spiritual desert that is New Orleans, (where physical deserts
don’t exist), with her face gaunt and the dark roots in her hair showing,
Opolais’s voice transcends her surroundings. Manon is a true hero because she
changes, develops and learns true meaning.

The staging of the Paris Act makes or breaks any production, since it
confronts the obscenity of Manon’s situation as, frankly, a one-man
prostitute. The stage shrinks, lit by a frame of light suggesting a prison
without bars, with cut glass objets de luxe symbolizing hard but
fragile transparency. All is delusion, the makeup, the madrigals, the dancing.
Geronte (Roland Bracht) fancies himself an artist. His friends and AbbÈ’s
aren’t fooled. They’ve come to perve at Manon’s body. In London, many in
the audience were aghast that the scene was shown as live porm, but that’s
exactly what it is, a rich man showing off to dirty old men like himself.
It’s not meant to be pretty, as
any reading of Puccini’s score makes clear. 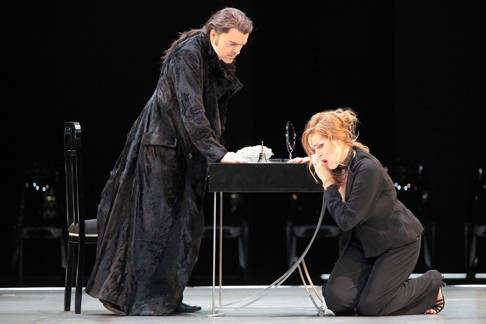 Markus Eiche as Lescaut and Kristine Opolais as Manon Lescaut

Neuenfels shows Geronte kissing Manon’s naked leg. The Dancing Master is
depicted as an ape, which adds even more horror. Yet Neuenfels also shows that
the Dancing Master and Manon have much in common, both reduced to performing
animals by the corruption of wealth. Geronte’s friends and, signifcantly,
AbbÈs, supposedly celibate holy men, are dressed as cardinals in fuschia pink.
This is not casual detail, for it connects to the brutality of a society that
reveres woman as virgins, but objectifies them as sexual creatures to be abused
and disposed of.

At Le Havre, Manon is seen in anonymous grey. The gloating crowd with their
red wigs now seem demonic,as they are indeed, since they’ve come to enjoy
seeing the degradation of women as prisoners. In contrast, the Sergeant seems
more human, since he lets Des Grieux slip aboard, no doubt breaking rules. By
the time we reach the all-impotant final act, all external trappings are
disposed of, too. Manon and Des Grieux are alone, in almost cosmic isolation.
All distractions stripped away, Kaufmann and Opolais can release emotions
through the sheer power of their singing. Divested of material things they
transcend the world itself.

Superlative conducting from Alain Altinoglu, too, leaner than Pappano, but
more suited to this elegant, austere conception. Of the three Manon
Lescauts in the last two years London, Baden Baden and Munich, this new
production is by far the most incisive and intelligent. Good opera goes far
beyond the first line in a synopsis. As Manon learns, life isn’t about glitzy
trappings, but about human emotion.