It’s a phrase which
seems to encapsulate Cheryl Frances-Hoad’s modern-day engagement with the
music of the yesteryear, as represented by the compositions which comprise this
CD, You Promised Me Everything, which express a gamut of human
emotions and complexities with startling dramatic impact. The CD, released in
2014, represents 10 years of writing for the voice and for choirs, and includes
Frances-Hoad’s first choral work, There is no rose, composed when
she was a teenager, and her first BBC commission, Beowulf (2012), a
‘miniature opera’ for soprano and piano.

One Life Stand (2011) for mezzo soprano and piano epitomises the
wonderful inventiveness and persuasiveness of Frances-Hoad’s response to
iconic compositions of the past, and the thoughtfulness and acuity of her text
setting. The eight songs of Schumann’s Frauenliebe und Leben
(Women’s Live and Loves) describe a woman’s love, from her
point-of-view, from her first meeting with her beloved, through marriage, to
her husband’s death and beyond. Apparently prompted by singer Jennifer
Johnston’s remark that the nineteenth-century perspective of Chamisso’s
poems was now rather outdated, Frances-Hoad has revisited a woman’s ‘one
life stand’ through settings of eight poems by the crime writer Sophie
Hannah, and has created a musical narrative which spans from the first bloom of
passion to the grief of bereavement.

From the two rocking chords which form the opening bars of the piano
accompaniment of the first song, ‘Brief Encounter’, there is a sustained
conversation between the accompaniment and voice, and a diversity of texture
that is a worthy homage to Schumann. Jennifer Johnstone’s line is pure and
eloquent, her intonation dead-centre: the melodic arcs soar above diverse
scintillating piano textures and figurations which are articulated with bright
clarity by Joseph Middleton. The harmonic language beguiles with Romantic
sumptuousness at times but is never indulgent, and unaccompanied vocal phrases
both isolate sentiments and add sincerity. 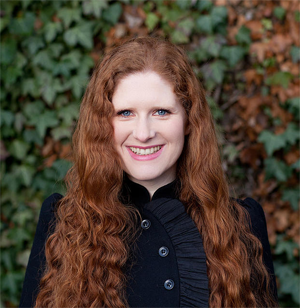 There is humour too: indeed, the titles of the songs often speak drolly:
‘The Pros and the Cons’, ‘The Ante-Natal’, ‘Rubbish at Adultery’.
And, this is echoed in musical details such as the brusque, quiet perfect
cadence which closes ‘The Pros and Cons’, wriggling piano accompaniment to
‘Rubbish at Adultery’ (meticulously executed by Middleton), and the dry
chordal accompaniment which punctuates with wry emphasis the text of ‘The
Ante-natal’:

‘My husband doesn’t want to hold the plastic pelvis model.
He tells the other husbands that it’s bound to be a doddle.
He thinks the role of classes is to teach, not mollycoddle.
He’ll go so far, but not an inch beyond.

My husband is afraid of meeting women called Magenta,
Of sharing wholesome snacks outside the Early Learning Centre,
Of any exercise that’s an incontinence preventor.’

I was reminded, in terms of both the text setting, vocal flamboyance, and
pithy accompanying gestures, of Britten’s Cabaret Songs of 1937-39
— indeed the neatness of the rhymes seems to match Auden’s wry verbal
dexterity: ‘My husband mocks the books with their advice about nutrition,/ He
shocks the other couples in the coffee intermission.’

In contrast, ‘Tide to Land’ has a rolling melodicism which recalls the
songs of Gerald Finzi, underpinned as this song is first by linear, exploratory
textures and harmonic inflections, and then by repeating chords in the
keyboard. Johnstone securely negotiates the abrupt changes of register, and her
lower voice has a soft beguiling quality; she wraps her alluring mezzo around
the elegiac lines most beautifully. But, there is darkness, too, at the start
of ‘Shadow Tree’, in the ominous, slow, low- and close-registered piano
chords which seem to compress emotion; and, the distance between the cloudy
accompaniment and floating vocal line isolates the voice in loneliness — this
song is the emotional centre of the cycle. Here and elsewhere the melodic
poise, elasticity and naturalness recall Britten vocal lines in works such as
the early Hymn to St Cecilia, and the later canticles.

The gentle reticence of the textures and harmonic language of ‘In the
Chill’ — which contrast with intermittent expanses of volume and density
— movingly convey the destabilising unpredictability and impact of loss. The
final song, ‘The Cycle’, begins with contained but agitated figures in the
piano which ascend to the highest registers, plucking at the nerve-strings.
There is restlessness in the rippling arpeggios which follow as the voice seems
to strive upwards, futilely seeking resolution, frustrated yearnings as the
music repeatedly breaks off into silence. In conclusion, however, there is some
consolation, with the return of the rocking chords of the first song ‘Brief
Encounter’: perhaps one woman’s song of life and love belongs to us all,
ever to be repeated.

Frances-Hoad studied at the Menuhin School and then at Cambridge University
with Robin Holloway, before completing a Ph.D. at King’s College London with
George Benjamin and others. Several of the works on this disc were commissioned
by Geoffrey Webber and Gonville and Caius College, Cambridge, and are performed
here by the College choir.

Psalm 1 for choir and organ (Nicholas Lee) was commissioned to
celebrate the 800th anniversary of Cambridge University and was first performed
in May 2009; the work won Frances-Hoad a BASCA British Composer Award in 2010.
The opening seems to be reassuringly posited in the line of the English choral
tradition: the harmony leans towards diatonicism, a single sustained note
played by the organ anchors the rich flowing voices, and the ‘open’ sound
once again recalls, for me, early Britten. But, the theatrical interruption of
a disjunctive parlando for male voices, punctuated by dissonant
quasi-screams by female voices, is disturbing, as the text moves from an
account of the virtuous to the ungodly, and the work closes ambivalently and
disconcertingly, unresolved intervals fading into a dark void: the wicked shall
surely perish.

Soprano Rose Wilson-Haffenden’s stratospheric solo which commences
Frances-Hoad’s Nunc Dimittis (2000) for 21 a capella voices
is stunning: crystalline, penetrating, mesmerising. Brief this three-minute
work may be but there is no shortage of intensity and range: as the
accumulating voices cascade, rebound and then retreat, Frances-Hoad’s
sensitivity to the text is once again confirmed. The solo soprano’s final,
ecstatic high C shines like a starlight into the cosmos. There is no
rose won Frances-Hoad the Bach Choir Carol Competition in 1995 and was
premiered by the choir at the Albert Hall that year. Again there is a debt to
Britten; yet, the composition shows an astonishing command of textural and
harmonic nuance, and such subtleties capture the both the meditative and
exhilarating qualities of the text.

Frances-Hoad does playfulness as well as she does piety and pathos though.
Don’t (2009) was dedicated to soprano Jane Manning for her 70
th birthday and sets text compiled from Blanche Ebbutt’s
Don’t’s for Wives (1913) — a handbook containing hundreds of
snippets of entertaining advice for a happy marriage that has more comedic
value than useful matrimonial guidance: for example, Ebbutt urges that a wife
should forbid her husband to wear ‘a violet tie with grass green socks’ and
instructs, ‘Don’t expect to know your husband inside and out within a month
of marriage. For a long time you will be making discoveries; file them for
future reference’. Manning has just the right balance of vocal precision and
dramatic insouciance; as she journeys to registral extremes, her soprano
interacts ironically with laconic contributions from piccolo (Robert Manasse)
and bass clarinet (Sue Gill), coolly conveying an air of self-deluding
sincerity. The repeating hymnal plagal cadences of You Promised Me
Everything Last Night (2011) for soprano, piano four hands and cello
(performed here by Natalie Raybould soprano, James Young and Joseph Middleton
piano and Rebecca Knight cello), together with the anchored vocal line which
after each soaring foray returns to its starting point, seem to underscore the
romantic clichÈs of the text. But, just as one settles into the familiar,
Frances-Hoad nudges the listener from the groove: the voice strays off pitch,
from melody to speech, and into breathlessness; the piano adds dissonant
coloration. It’s clear that, unnervingly, these six words (the subtitle is
‘six words, two chords, many melismas’) conjure more possibilities and
avenues than one imagined.

The CD concludes with Frances-Hoad’s 30-minute Beowulf for
mezzo-soprano and piano, which was premiered in 2012 by Jennifer Johnston at
the City of London Festival, and in which the composer re-explored the
Anglo-Saxon poetry which she had set in her song-cycle The Glory Tree
(the title track of her first Champs Hill CD, 2011). The narrative of the
ancient text isabbreviated and tells of Beowulf’s two fights, with
Grendel and with the dragon, set within a prologue and epilogue. The sparseness
of the musical writing — announced by the clanging open fifths (piano,
Alisidair Hogarth) of the first section, ‘So’, and the recitative-like
directness of the vocal line (a magisterial Johnstone, who demonstrates
enormous expressive and physical stamina) — has an epic quality, as if drama
and expression are pared down to the bare bones. There is a frightening
intensity in sections such as ‘Then his rage’: the rhythmic and melodic
hairs are all on edge. Hogarth’s complex piano never overpowers Johnstone’s
utterances though, which possess an elemental energy, and the piano’s airy
asymmetrical motifs in ‘Hildeburgh’ are suave and propulsive. Frances-Hoad
provides structural balance: there are episodes of reflection and restraint,
and ‘When Hrothgar arrived’ is characterised by a lower tessitura
(showcasing Johnstone’s rich chest voice) and tight oscillations of chords in
piano accompaniment. The piano interlude mid-way allows for a drawing of
breath. After the initial furious conflicts, the tone becomes more fatalistic
and Johnstone succeeds in capturing the shifting moods as, after the assertive
bravura of ‘Then he drew himself up’, the narrative sinks into the anguish,
and quiet dignity, of the concluding declamatory episodes and final
unaccompanied measures. This composition makes one long for a full-scale
operatic work from Frances-Hoad.

With the exception of There is no rose, these recordings were all
made either in the 160-seat concert hall at Champs Hill, the home of David and
Mary Bowerman, or in Emmanuel College Chapel, Cambridge, and the recording
quality is superb; there is an excellent balance between solos and ensemble,
voice and accompaniment, and the sound is clean and bright but not too
‘near’. The CD is carefully packaged and presented with a detailed and
informative booklet article by Malcolm MacDonald, and full biographies of all
of the talented and committed musicians who perform. (One small quibble might
be that no texts are provided.)

Frances-Hoad’s catalogue of honours is long and growing: she won the BBC
Lloyds Bank Composer of the Year award when she was just 15 and the Mendelssohn
Scholarship, The Bliss Prize, The Cambridge Composers Competition, The Robert
Helps International Composition Prize (USA), The Sun River Prize (China), The
International String Orchestra Composition Prize (Malta), The RPS Composition
Prize, and the BASCA British Composer Awards (where she became the youngest
composer to win two awards in any year for Psalm 1 and Stolen
Rhythm in 2010) have followed. She has received two awards from the PRS
Women Make Music Fund (for The Madness Industry, a brass quintet for
Onyx Brass, and Sailing to the Marvellous, a 90-minute oratorio for
four choirs and ensemble for Bridlington Priory) and has held the posts of
Leverhulme Musician in Residence (at the University of Cambridge Psychiatry
Department (2008)), Rambert Composer in Residence (2012/13), and Opera
North/Leeds University Cultural Fellow in Opera Related Arts (2010/12).

But, more impressive still is the profusion and profundity of her musical
invention, and the distinctive quality of her musical voice identity: on the
strength of this CD, it’s clear that Frances-Hoad is able to fuse Romantic and Modernist sensibilities and to
composer music which sings with naturalness and honesty which communicates
richly and deeply.