After a sparkling, infectious overture, expertly led by Speranza Scappucci, a Les Miz style barricade rotates to reveal the choristers, not in colorful folk costumes, but in severely styled black funeral wear (think: Amish look).
Belying the set-up of the sprightly overture, director Ned Canty got things off to a rather somber start, more William Tell than Donizetti’s comic opus. After this stolid beginning, Mr. Canty seemed to have second thoughts, and in short order the tale gets liberally peppered with the usual (and some unusual) shameless jokes and inspired (and some uninspired) physical comedic schtick, and then some. Canty wrote the English dialogue with the music sung in the original French.
Allen Moyer’s sets and costumes were quite witty and adaptable. The barricade of Act I yields furniture and props that cleverly get plucked off the pile, and there are ample levels to create interesting stage pictures. The ornate false proscenium, hunter green with panels painted with Tyrolean scenes, created a sense of place and established a highly theatrical style. A stylish carriage conveys the Marquise on- and off-stage. The Berkenfeld manse of Act II is sumptuous inside and out, its exterior paraphrasing Linderhof. Rick Fisher’s efficient lighting design was up to his usual high standard.
After the drab opening attire, Mr. Moyer’s costumes add color little by little, first with red and blue uniform jackets, then with Tonio’s red and black Trachten, later with lavish party gowns. Marie’s over-the-top pink dress for the Lesson Scene was a riot of invention and that scene crackled with good humor. And then the director seemed to change his mind again with the mood becoming soul-searching, earnest, and well, a bit ponderous. By the time he changed his mind yet again with the interpolated and extraneous announcement of silly German names and titles of all of the party guests, the Duchess of Krakenthorp was thoroughly pre-empted and upstaged. 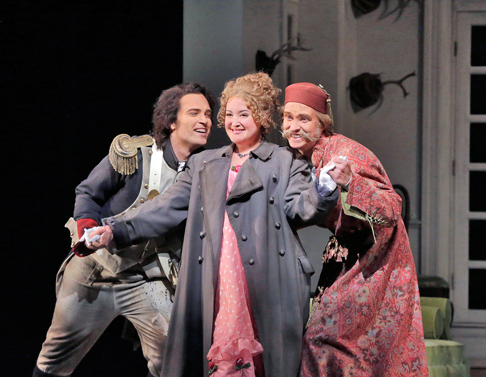 Alek Shrader as Tonio, Anna Christy as Marie and Kevin Burdette as Sulpice-Pingot
By that point, the return to frivolity was too little too late. Self-indulgence marred Act II with too many lilies being gilded with too much “added material,” too much deference to the (secondary character) Marquise’s “feelings,” and too little regard for pacing in what is, after all, a pretty slight comedy. By removing non-essential business, tightening the repetitious dialogue, keeping the focus on Marie-Tonio, and urging the pace along, about ten minutes could be taken off the second act and the show would be even better than the audience already thinks it is.
Whatever the (only) occasional longueurs of the staging, Maestra Scappucci snapped the proceedings back into focus every time her authoritative baton came down, eliciting a reading of the score that was characterized by audacious spontaneity, effervescence and a keen sense of style. The conductor not only admirably partnered her singers with breadth and flexibility on poignant arias, but also took firm control over such tricky allegro passages as that breathless account of the Act II trio Tous les trois rÈunis. Clearly, the talented Speranza Scappucci is a podium star on the rise.
A lot is asked of the four principles in carrying The Daughter on their backs, and they did not disappoint. The great Beverly Sills once described the vivandiËre Marie as “Lucille Ball with high notes.” Just as we all loved Lucy, we were enchanted by pretty, perky and petite Anna Christy who proved a natural as the canteen girl, a supposed orphan who has been “adopted” by the 21st Regiment.
Ms. Christy takes the stage as an unapologetic tomboy and shows off awesome comic timing. Adding to the appeal, she also has a finely spun, meticulously schooled, silvery soprano of great agility and admirable range. While she offers sparkling vocalizing throughout the evening, it is in the slower arias that she finds the most personalized tone and most engaging pathos. If I had one wish for Anna, it might be to eliminate a few of the held notes in alt. The couple of thrilling successes were offset by a few that wanted to splay. When you are as accomplished as this, when we are already eating out of your hand, when we wouldn’t miss the additional stratospheric notes, why take chances? That minor quibble aside, Anna Christy is giving a wholly accomplished star performance. 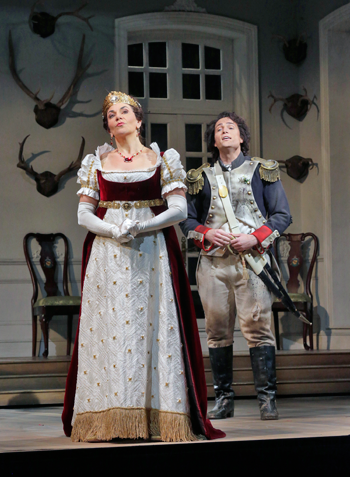 Phyllis Pancella as the Marquise of Berkenfeld and Alek Shrader as Tonio
Alek Shrader is easily the funniest Tonio of my experience. From his first entrance, picture postcard handsome in his Tyrolean get-up, he immediately betrays a puppy dog eagerness and gangliness that is consistently appealing. His physical comedy was superb. When he tried to be Joe Cool, listening to Marie’s story, he kept feigning casual positions that were impossible to maintain, with one of these finding him clinging to the barricade and dangling like a dyspeptic monkey.
Mr. Shrader’s singing was assured and correct, although the tone has taken on a slightly veiled quality since last I heard him. He has a fine sense of legato, to be sure, and he injects personality and purpose into all he sings. The very top notes thin out a mite these days, and while he certainly had the goods for “Mes amis,” he lacked that final ounce of real distinction. Like his co-star, he scored decisively in such touching moments as Pour me rapprocher de Marie, in which his beautiful instrument, comfortable tessitura, and heartfelt intent magically merged.
As Sergeant Sulpice, it was hard to believe that Kevin Burdette was the same performer who was so serious and compelling in Cold Mountain some days prior. Here, he was all loose limbs and German-challenged orator, a marriage of Dick Van Dyke and Mr. Magoo. Forget about solar panels, Mr. Burdette generates enough energy to power greater Santa Fe. That he also sang with a direct, polished delivery was icing on the pratfall.
Far from the usual dotty Marquise de Berkenfeld, Phyllis Pancella offered a glamorous and elegant interpretation. If her ripe mezzo has gained a more mature sheen over the years, she remains a very gifted singer. Her craft is on full display as she deftly utilizes a change of registers to underscore comic shifts in her musical lines. Moreover, she proved herself once again to be a fine comedienne, delivering her lines with an endearing self-importance, while mugging with a vaudevillian’s understated expertise. 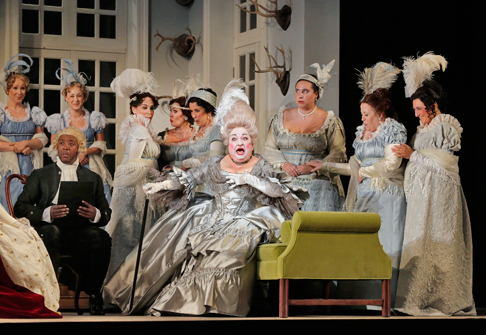 Judith Christin as the Duchess of Krakenthorp
The accomplished singer Judith Christin seemed wasted as the Duchess of Krakenthorp. Heavily made up in clown white greasepaint and overstated features, got up in an over-the-top silvery-white gown, and topped with an ostentatious wig, when Ms. Christin spoke in her distinctive contralto and rasped an exhortation with a heavy German accent, she could have been a man in drag. She did all that was asked of her with conviction to be sure, but I for one wish more had been asked.
Apprentice Calvin Griffin offered an imposing, handsome presence and sang with an assured bass-baritone as the servant Hortensius. Susanne Sheston had the chorus singing with gusto and personality. Se·n Curran crafted some delightful, natural choreography, especially the Regiment’s fist pounding “salute” that delectably recalled the hand jive.
All in all, this Daughter had quite a successful romp across the SFO stage, but when she got too regimented and moody I just wish someone had told her to lighten back up.
James Sohre