Like SFO itself, the Verdi opus proved to be evergreen.
This was owing in no small part to a high-powered cast that would be at home on any world stage. In the title role, Quinn Kelsey served notice that he surely has few contemporary equals in this demanding part. Mr. Kelsey dominated the proceedings from his first appearance, not only with a hulking physical presence but also with a superlative baritone that had urgency and menace.
His measured, sarcastic barbs were served up with a honeyed malice, and his introspective musings had a possessed, haunting humanity. In the duets with his daughter, his opulent legato conveyed a depth of feeling not often captured by other interpreters. His was a top tier performance of one of the greatest baritone roles in the canon. 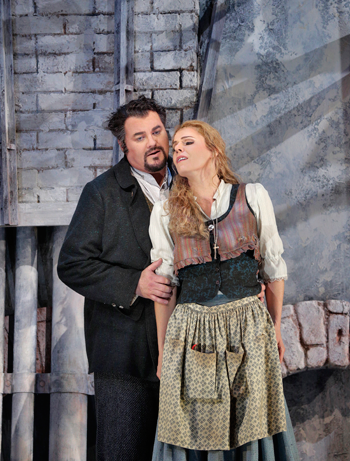 Bruce Sledge as the Duke of Mantua and Georgia Jarman as Gilda
As Gilda, Georgia Jarman matched him in every respect, displaying a sizable lyric soprano, capable of great nuance and color. The hints of gold in her upper register conveyed a youthful, infatuated girl in her first scene, while the touch of tremulous intensity in lower ranges communicated her conflicted disobedience of her father’s wishes.
After the Duke rapes Gilda, Ms. Jarman infused the sound with a touching despair, then maintained a firm resolve to the end. Her delicate, ethereal singing in the final bars was not meant for mere human ears; it was ravishing and heartbreaking.
Bruce Sledge brings such a secure lyric tenor to the Duke of Mantua, so lovingly produced that you could almost be seduced that he is not a shitheel. Mr. Sledge has all the notes in his arsenal and then some, and he sings the famous arias and the treacherous quartet with abandon. His acting and vocal coloring are a bit generalized but he is never unengaged. Time and experience will allow this talented singer to find his own unique qualities that he can bring to the role.
Apprentice Peixin Chen was sonorous and unctuous as the villainous Sparafucile. His rich, dark bass poured forth effortlessly, and he had a fine stage presence. As his sister (and murderous cohort) Maddalena, Nicole Piccolomini pinned our ears back with a steely mezzo of substantial size and import. Although not announced as indisposed, there seemed to be hints of a troubling rasp to some attacked phrases. Still, Ms. Piccolomini gave an assured performance.
Robert Pomakov was a coiled spring of a Monterone, his thunderous bass frightening in its intensity. Young artist Jarrett Ott took advantage of every note the master wrote for Marullo and sang with a solid, attractive baritone. Shabnam Kalbasi similarly imbued Countess Ceprano’s critical phrases with poised, attractive singing. Anne Marie Stanley made much out of Giovanna with sassy, classy vocalizing and a well-rounded characterization. 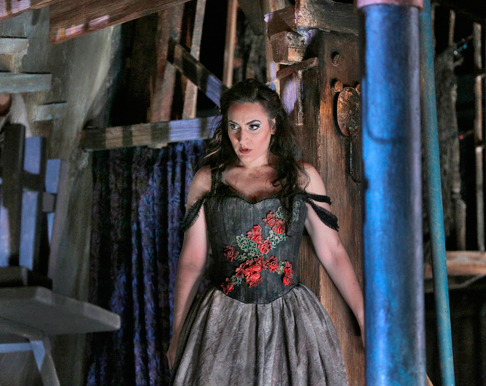 Nicole Piccolomini as Maddalena
From Jader Bignamini’s first downbeat, the conductor led a propulsive, taut reading weighted with dramatic conviction. The foreshadowing of the curse in the prelude has never seemed so urgent. Maestro Bignamini crafts a thrilling dramatic arc to the familiar score that not only moves forward inexorably but also takes time to relish subtleties in the diverse emotional journeys of the characters. Susanne Sheston has the marvelous chorus trained to a fare-thee-well.
The physical production could hardly have been better. Adrian Linford does double duty as Set and Costume Designer and excels at both. The production has been placed in the time of its composition. To solve the challenge of the multiple settings required within the limits of the SFO stage, Mr. Linford has crafted a marvel of a rotating structure that is a veritable kaleidoscopic collage of stairs and colonnades and fences and windows and chambers, all slightly askew, and all multi-functional. The colors, textures and architectural fragments skillfully evoke Mantua.
Mr. Linford’s costumes are very inventive, especially for the jester, decked out in a large overcoat, with a Charlie Chaplin hat, thick orthopedic shoe on one foot, and a false vest front that Gilda helps him change out during their first duet. Courtiers look sufficiently wealthy but with a patina of debauchery. The women are mostly got up (or not clothed much at all) as lurid, willing and available sex objects. Giovanna is an abused maid who has a visible syphilis scar on her pallid face.
This is a crumbling, decadent environment, tellingly lit with a twilight-of-the-gods finality by Rick Fisher. Within this effective visual environment, Director Lee Blakely directs a straight forward, no-nonsense telling of the tragedy that is breathtaking in its accurate simplicity. Mr. Blakely has crafted an evening of movement and interaction that is always true to the story and that clarifies the shifting dynamics of mood and character development. His use of the many available levels creates visual interest and variety. When he does inject some innovative sub-text, it pays handsome dividends. 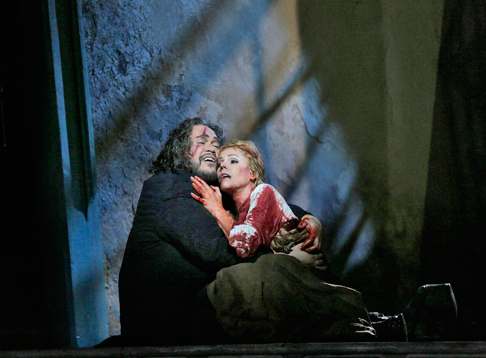 Quinn Kelsey as Rigoletto and Georgia Jarman as Gilda
The usually forgettable maid Giovanna is a case in point. Blakely’s take is that she is a spectral, unhappy (perhaps abused) creature, who appears to be starving. Her complicity in tricking Rigoletto is born of revenge, and after Rigoletto sinks to his knees with the realization that his daughter has been kidnaped, she spits on him as she stalks off. It is such attention to detail, and commitment to honest interplay that makes this a near perfect “Rigoletto,” shattering in its cumulative effect.
I can’t think of a better two-thousandth milestone present than this fine evening of opera with the company operating on all cylinders at its very best.
James Sohre