This was far more than a mere concert, performed from memory by the choir
and a team of young soloists includingKrystian Adam as Orfeo, Mariana Flores as
Eurydice and La Speranza, FrancescaAspromonte
as La Musica and La Messagera,Gianluca
Buratto as Caronte and Plutone,Francesca Boncompagni as
Proserpina,Andrew Tortise, Nicholas Mulroy, Esther Brazil, Gareth Treseder, James Hall and David Shipley, this
was a full staging with action and dancing taking place on the platform in and
around the instrumentalists.

The vast expanse of the Royal Albert Hall is, frankly, not the most sensible
place to perform a work like L’Orfeo. It demanded, and received,
intense concentration from the audience. John Eliot Gardiner used quite large
forces, with a choir of over 40 (including eight members of the Monteverdi
Choir Apprentices Programme). The soloists were also in this group with most
stepping out to sing their roles. The orchestra numbered some 30 people, but
the moments when they were all playing was very rare and much of the vocal line
was accompanied by the continuo group of harpsichord, organ, harp, cello and
four chitarrones.The peculiar effect of the acoustic could be heard in the
opening toccata when the cornetts and sackbuts filled the hall, leaving the
other instruments virtually inaudible. 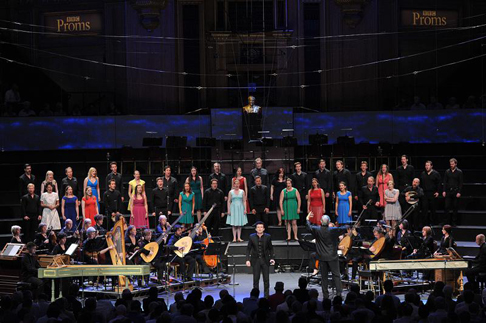 Monteverdi Choir with Krystian Adam in the foreground

John Eliot Gardiner is a veteran of Proms performances and understands how
to make the Royal Albert Hall work. His tempos allowed space for the music to
develop and it was noticeable that he directed all the music, even the smaller
scale sections where in a smaller venue the conductor would be redundant. But
Gardiner’s speeds seemed as if they were also a personal choice, this felt
like a performance where we were being encouraged to stop and smell the
daisies. There was a consistently relaxed feeling, and a constant sense of
allowing space for the elaborate vocal lines to flourish. The great moments
such as Orfeo’s Possente spirto possessed a mesmerising beauty and a
sense that the incredible ornament was really part of the music, but they
completely lacked urgency and a feeling of the drama progressing.
L’Orfeo is an opera in which very little happens and we did rather
lose the sense of a dramatic narrative. This was perhaps one of the longest
performances I have experienced, lasting well over two hours if you include the
pauses for re-tuning with well over 110 minutes of music.

This was very much an all singing, all dancing production. Mariana Flores
and Francesca Aspromonte took a lively part in the dancing during Acts One and
Two, and there was no sense that this staging was ‘semi’, it fully occupied
the stage. No director or choreography was credited, but the singers all used a
rather stylised gestural language which, in a performer like Krystian Adam, I
started to find mannered rather than expressive. One of the strengths was the
intense way the smaller roles were characterised, the various nymphs, shepherds
and spirits who step out from the chorus and then retire. Here they became a
strong part of the drama.

For me the most thrilling moment was the opening, with the Prologue sung by
Francesca Aspromonte as La Musica. She sang with daring slowness, but made
every single note and phrase tell despite quite a slim-line voice. Having a
number of native Italian speakers in the cast meant that this was a production
in which the text really did mean something, and we certainly didn’t need
surtitles. Rather neatly Aspromonte accompanied herself (very creditably) on a
guitar at one point. Not every singer managed to make such a strong impression,
but when Aspromonte returned as La Messagiera she was equally vivid, though
here she was forced to deliver the solo whilst walking through the promenaders
accompanied simply by an ambulant chitarrone player. 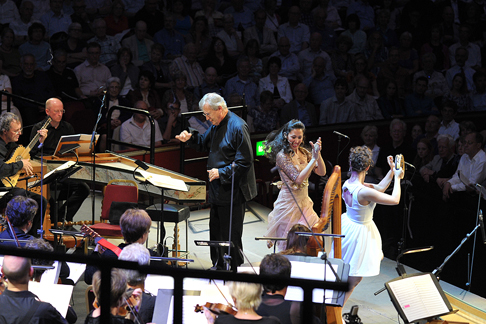 Mariana Flores was a charming, soft-grained Eurydice who never quite managed
to make a strong impression musically and rather over-acted her love for Orfeo
to compensate. She made a poised La Speranza.

Krystian Adam as Orfeo was of course the centre of attention. Adam did not
sing to the hall, and forced everyone to concentrate, to centre their attention
on him. It was a performance well worth concentrating on. He has a lovely,
flexible soft-grained lyric voice and had clearly though about the intensely
elaborate vocal line so that it had a naturalness to the way it sat in his
voice. Possente spirto was completely mesmerising, and time really did
stop. Fatally so, in that we often seemed to lose a sense of dramatic urgency.
But this was one of the most beautiful accounts of the role that I have ever
heard.

Gianluca Buratto was a wonderfully dark voice Plutone and Caronte. Finely
implacable as Caronte, he revealed ultimately a softer side as Plutone. Here he
was aided by Francesca Boncomopagni’s elegant, slim-voice but highly
expressive Proserpina.

The smaller roles were all very finely taken. Esther Brazil stood out as the
Nymph, whilst Andrew Tortise effortlessly commanded both the music and the
stage as Shepherd I and Apollo. I am a little unclear who played whom for the
rest, as I think the programme got things wrong. Gareth Treseder was credited
as Shepherd 2 and Spirit 2, with Nicholas Mulroy as Spirit 1, but I think that
it was the other way round. No matter, they and James Hall and David Shripley,
produced some vivid and highly characterised singing.

The Monteverdi Choir were in superb form, singing with a lovely flexibility
and vividness. The performance was almost worth it for them alone, and the
lightness of their performance belied the large number.

All were well supported by Sir John Eliot Gardiner and the English Baroque
Soloists. Inevitably in a venue as large as the Royal Albert Hall the
individual solo instrumental contributions can blur, but the overall effect was
a stunning riot of virtuoso technique and orchestral colour.

Sir John Eliot Gardiner presided over a profoundly beautiful, and strongly
characterised account of the score. There were some glorious moments, and this
was very much about the power of music. But, for me, Gardiner’s approach
robbed it of the underlying dramatic urgency that the plot needs.