The librettist was Gene Scheer who wrote texts for Jake Heggie’s Moby-Dick as well as Tobias Picker’s ThÈrËse Raquin and An American Tragedy. Scheer based his libretto for Cold Mountain on Charles Frazier’s historical novel of the same name. Higdon has successfully redirected her formidable efforts from the symphony to the theatre, and in doing so has produced a most memorable first opera. Not only do her vocal lines underline the personalities of each character, they are melodic, witty at times, and generally reflect the time and place of the setting.
Although director Leonard Foglia told his tale with occasional flashbacks, the action generally surged forward to capture the emotional punch of the novel. Robert Brill made his scenic design of dark boards juxtaposed at various angles. With the addition of Brian Nason’s lighting and Elaine J. McCarthy’s projections, they could be made to resemble land, sea, and the star-filled sky. David C. Woolard’s costumes were accurate as to time and place. 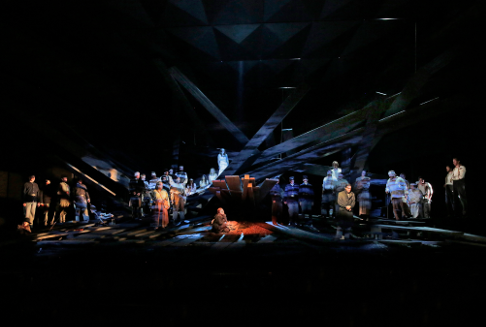 Ensemble cast
Baritone Nathan Gunn sang the leading role of W. P. Inman, a wounded infantryman who deserts the Confederate army in an desperate effort to make his way back to Ada, his beloved. Gunn’s large, warm, resonant voice endeared him to listeners from the very beginning of the opera and the audience felt a loss when he died. As Ada, Isabel Leonard was a well brought up young lady who, in Act I, had no knowledge of how to survive in wartime. Her light, lyric mezzo-soprano voice denoted her youth and occasional exuberance, but it was not until the second act that she solidified her portrayal. It was the darker-voiced mezzo-soprano, Emily Fons, who created an immediately recognizable character in her depiction of the edgy, strong-willed Ruby. With golden sounds that included an opulent mid-range, she sang that her only teacher was hunger while she taught Ada how to live off the land and plan for a Spartan future.
Many artists portrayed smaller parts in this panoramic opera. Kevin Burdette was a notable blind man and a selfish deadbeat dad. Roger Honeywell gave a nuanced dramatic performance as Veasey, whose boat seemed to capsize in the air, dumping him and Inman into the dark of night. As Lucinda, whom Inman found hunting for valuables on the bodies left to rot on the battlefield, Deborah Nansteel sang with formidable vocal power while expressing the desperation of a runaway slave. 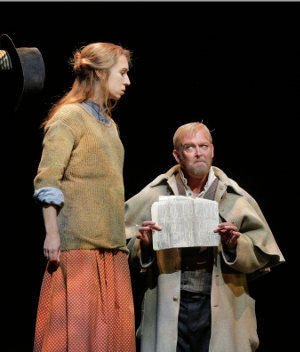 Emily Fons as Ruby and Jay Hunter Morris as Teague
Although tenors are usually heroes who get the girl, Teague, sung with great gusto by heldentenor Jay Hunter Morris, was a murderous villain who continually tried to cause trouble for anyone who did not support ideas of the Confederacy. Morris proved to be a singer whose bronzed tones could enchant an audience while they resonated with evil. Surprisingly, in the end it was not Teague who killed Inman, it was the young boy he had trained to carry on his violent work.
Some of the music of Cold Mountain hit the audience directly in the solar plexus. One of its most stirring moments took place when the dead soldiers who said they had long been forgotten, rose from their graves to tell the audience what they died for. Chorus Master Susanne Sheston’s male apprentices sang with nuanced dramatic power:

“Buried and forgotten
In our beautiful country
Where we lie buried
We rest beneath every step you take,
In the dust, in the ground on which you tread.”

Conductor Miguel Harth-Bedoya led an orchestra of interesting proportions that offered pungent harmonies and displayed an enormous tapestry of musical color thanks to the inclusion of considerable brass and percussion. Currently, the opera is being recorded by the Dutch label, PentaTone. Since Cold Mountain’s five scheduled Santa Fe performances sold out early, a sixth one has been added.
Maria Nockin