The Norma herself is Cecilia Bartoli, and she is as well the artistic director of the Whitsun Festival (where, by the way, this next spring she will sing Maria in West Side Story conducted by Gustavo Dudamel). Evidently Mme. Bartoli is as deft a producer as she is a deft Norma.
Bellini’s spectacular old warhorse is a tour de force for a soprano, Mme. Bartoli’s upper extension is well able to handle the high and intense emotional climaxes, her lower chest voice beautifully portrays Norma’s maternal moments, and in between a strong mezzo-soprano sound well sustains the extended lines and slow motion of the likes of “Casta diva.” Mme. Bartoli’s musicianship is exemplary, her coloratura absolutely splendid, achieving in the cabaletta of rage at the end of the second act astonishing vocal turns that are unique to her artistry.
But all of this has been said many times before. It has also been said that la Bartoli is an exemplary producer, not only casting voices that compliment her sound, technique and musicianship but engaging a conductor and orchestra that simulate an early nineteenth century Bellini musical poetic, in this case La Scintilla, a Zurich Opera founded original instrument ensemble. This splendid orchestra makes a far more mellow sound than the sharp, exciting tones of a modern orchestra, its sound supporting, not competing with the beautiful singing that must resolve the truly impossible, indeed ugly situations proposed by the early Romantics.
Mme. Bartoli’s most brilliant choice is however that of stage director, in this case the French team Moshe Leiser and Patrice Caurier who imposed a concept that portrayed a parallel situation and created an atmosphere and a context that in no way updates what little Bellini knew (and we know) of the Druid fertility ceremony. The staging did not attempt to explain, amplify or go beyond the preposterous story the opera tells. It simply told another story from another century simultaneously. Both stories share a crucial theme — consorting with the enemy. 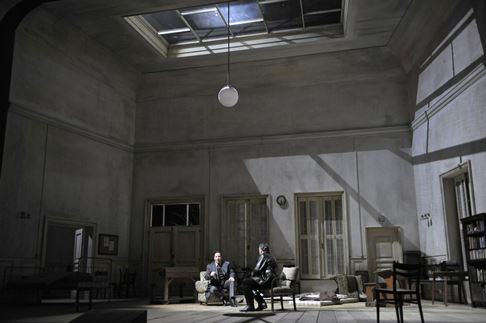 Set design by Christian Fenouillat
The mythical Druid world was sung in a school room in Vichy France. It moved to a blank wall, there was a doll in a blanket (an abstraction of Norma’s two children) and finally it returned to the school room that went up in flames. But not before Norma’s hair was hacked off marking her as a sexual collaborator. The ethical conflicts felt by a twenty-first century audience were addressed while the Romanticism of bel canto was allowed to drive naturally to its fiery climax (the fickle lover obviously won over by Norma’s beautiful singing since otherwise his change of heart cannot be comprehended). 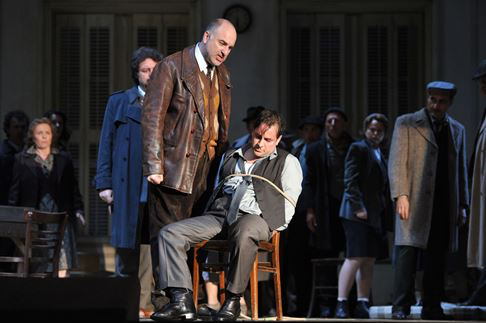 Michele Pertusi as Oroveso, John Osborn as Pollione
American tenor John Osborne is an exemplary Pollione, his sound and presence are of the amplitude to hold his own with two over-wrought sopranos, and his is of sufficient tenorial stature to go to his death with real coglioni — Mr. Osborne is able to respect the grace of bel canto and cut a fine figure as a lover as well be a tenor. Zurich Opera trained, Mexican soprano Rebeca Olvera possesses a much lighter voice than Mme. Bartoli. Her Adalgisa is intended to be girlish rather than monastic, she is vocally virginal in contrast to the maternal mezzo Norma. Italian bass Michele Pertusi sings Oroveso using a natural sharpness of voice that easily withholds all possible forgiveness.
Musically the production was in the hands of Zurich based Italian early music conductor Giovanni Antonini who keeps careful control of his orchestral forces to allow the bel canto to soar in the voices of the singers rather than rise from the pit. This Norma is about singing the Druid world as this world was perceived (maybe) by Bellini. And too this Norma is a collision of centuries.
Michael Milenski

All Photos © Hans Jˆrg Michel, courtesy of the Salzburg Festival.