This production by British stage director Lee Blakeley (same sets, costumes, stage direction) was originally done at Paris’ ThÈ‚tre du Chatelet in 2011. The Chatelet is a 2500 seat horseshoe theater that has hosted much revered and some esoteric music theater over the years, like for example Alfano’s Cyrano de Bergerac as a flashy vehicle for Placido Domingo that was brought to SFO. Director Blakeley in fact has staged four Stephen Sondheim musicals at the Chatelet — Sweeney Todd, Sunday in the Park with George, Into the Woods and A Little Night Music.
Chatelet productions are big and lavish and loved by Parisians.
The original Sweeney Todd 1979 Broadway production by Hal Prince was fairly modest with even a bit of avant-garde (for the time) theatricality, a reaction to the then customary razzle dazzle of musicals. The first opera company to take on Sweeney Todd was the Houston Opera in a Hal Prince production in 1984. This was the period when there was a concerted rapprochement of opera and musicals, Hal Prince directing a Madama Butterfly for Lyric Opera of Chicago in 1982, a production San Francisco Opera General Director David Gockley revived not so long ago in San Francisco. 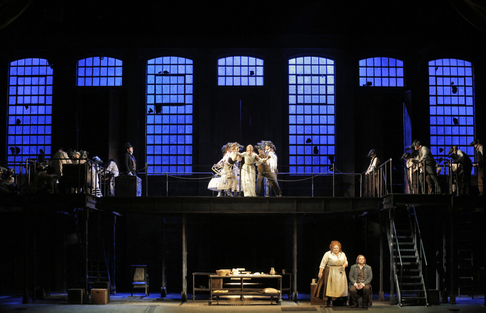 Production design by Tanya McCallin
Hal Prince went on to stage Phantom of the Opera in 1986 and the bloated production scope of that show changed forever what we now consider a Broadway musical.
The 2011 Chatelet Sweeney Todd was big, and in San Francisco perhaps even bigger from the first moment when splendid digital technology recreated the huge acoustic of a pipe organ exponentially amplified to actually shake the War Memorial Opera House. And thus to get our attention in a reversal of the oft used theater trick of focusing attention ever smaller to make one aware of even the tiniest sound.
So we were warned that it was going to be a loud three hours in the opera house, and indeed it was. All the voices were hugely amplified thus creating an unrelenting loud, flat soundscape for the duration, embellished by some shattering electronic ringing when throats were slit. It was sometimes disconcerting when you were unable to place a voice you heard in the general sonic melee with a face you knew was somewhere — but where — on the stage.
Perhaps the orchestra sound was electronically manipulated as well, if so it will have served well to let us in on the subtleties of the orchestrations by Sondheim’s musical collaborator Jonathan Tunick, and onto the compositional complications that raise the level to what seems to be seriously sophisticated big music.
Biggest of all in San Francisco was the Sweeney Todd himself, baritone Brian Mulligan who is often miscast in secondary baritone roles at SF Opera. Here Mr. Mulligan fully inhabited the role wrenching every possible nuance within the limited emotional confines of the role and finally moved us. Equally big was the pie baker Mrs. Lovett, a star turn performance by veteran mezzo soprano Stephanie Blythe. Big is not the correct word — it was a huge performance in which her relish at pushing her chest voice was deliciously apparent.
The romantic lead Anthony Hope was sung by baritone Elliot Madore who knew how to take the postures of the cardboard musical comedy lover to the extremes of ardent, melodramatic (caricatural) proportion, and of course exactly the same may be said of Johanna, the damsel in distress, sung by soprano Heidi Stober. 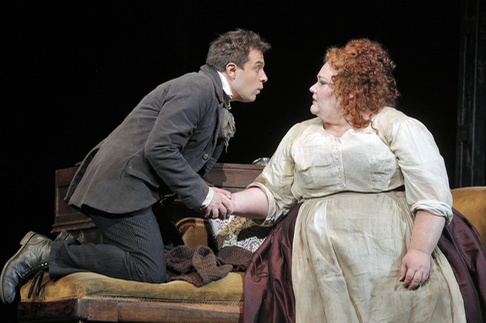 TMatthew Grills as Tobias Rogg, Stephanie Blythe as Mrs. Lovett
Of special interest was the role of Tobias Rogg sung by tenor Matthew Grills. He earned the biggest ovation, and it was huge, for his song “Not While I’m Around.” This song is the one moment in the musical where what might pass for real feelings or emotions seemed to enter the catalogue of occasions for a musical number. Mr. Grills sang it softly and sweetly indeed, and the human scaled volume seemed to say that he meant it.
The gamut of casting was perfect to voice and character. One wishes that this degree of care would extend itself to the casting of the operas at San Francisco Opera.
Houston Opera’s artistic and musical director Patrick Summers was in the pit, taking the orchestral proceedings very seriously indeed. Mo. Summers is a singers’ conductor, his care in supporting these opera singer artists in music that requires more conviction than technique contributed enormously to the success of their performances.
This day included the announcement of David Gockley’s former Houston Opera assistant Matthew Shilvock as the new General Director of San Francisco Opera. Mr. Shilvock has been a part of the San Francisco Opera’s administration during David Gockley’s entire tenure.
And thus the Houstonization of San Francisco Opera continues.
Michael Milenski