German soprano Diana Damrau who cancelled in San Francisco (too tired). Former Adler Fellow Nadine Sierra was poised to step into the bloodied costumes in both cities.
The young soprano paused a moment on the top of a glass skyscraper, then leapt to her death. All reports from the 1200 seat Opernhaus Z¸rich are that Mlle. Sierra’s mad scene was delightful and that she had effectively, if carefully negotiated the rest, and quite beautifully.
The world has awaited news about how this fine young (27 years) soprano would fare at San Francisco’s War Memorial Opera house, essentially three times the size of the Zurich house. The consensus is that Mlle. Sierra sang beautifully and held the stage. No small feat for an ingenue soprano, not yet a star.
That Mlle. Sierra did not take San Francisco by storm as she had Zurich (with reservations) is explained by two factors.
The first is that she was thrust into a hostile production, essentially a marble quarry when it was not the formalized architecture of Baroque opera complete with a scenic machine (the full stage show flat that was a camera shutter, astonishing because even though it was made of marble slabs it moved so smoothly and easily). But sometimes the setting was a marble knock off of Fritz Lang’s 1927 sci-fi film Metropolis. Every-once-in-a-while there were cameo’s of what were surely the crashing waves of the Pacific. 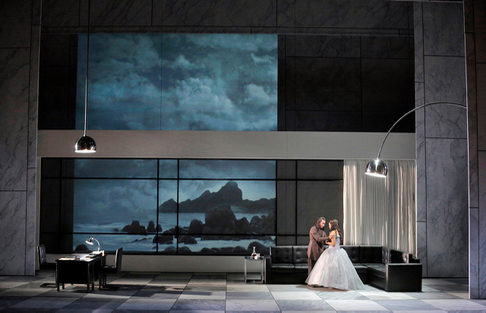 Nicolas TestÈ (Raimondo), Nadine Sierra (Lucia)
The beautifully wrought studio bel canto of a young singer did not have a chance as Lucia di Carrara (Italy’s famous marble quarry).
The second factor is the pit. Conductor Nicola Luisotti exploited every possible effect from his orchestra, effecting a bel canto competition between the stage and the pit. And too this maestro is known for controlling his singers, thus the stage often is merely an extension of the pit. Even the stage movement is controlled by Luisotti’s domination of his singers, as an example the mad scene was staged as a straight line moving straight upstage from the conductor podium.
Experienced singers — stars — are usually able to cope with this maestro, and sometimes a synergy is effected. Great things can happen. An ingenue artist has not yet absorbed the considerable presence needed to impose himself or herself on this maestro. 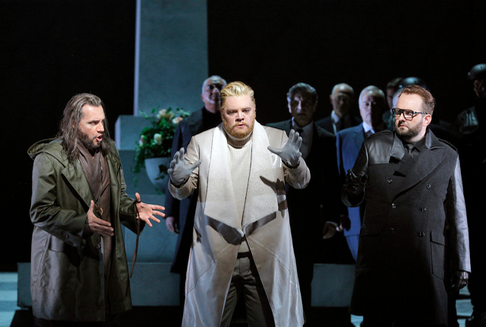 Nicolas TestÈ (Raimondo), Brian Mulligan (Enrico) and AJ Glueckert (Normanno)
Some of the singing in this Lucia was effective, notably baritone Brian Mulligan sang Enrico’s first act aria aria and cabaletta stylishly and convincingly. Mr. Mulligan is also singing Sweeney Todd where his cardboard acting works. And we also recently saw Mr. Mulligan as Marcello in Boheme (where it didn’t), and as Cassandra’s fiancÈ in Les Troyens, as Count Anckarstrˆm in Ballo, and the list goes on and on. One begs the question — is Mr. Mulligan the only baritone in the world? One shoe size does not fit all feet and one fine baritone voice does not fit all baritone roles. Finally Mr. Mulligan’s comic book Enrico did not survive the evening.
The one opera star in this Lucia was tenor Piotr Beczaia as Edgardo. While other critics found subtlety in his performance I found none. It was indeed loud enough to compete with the orchestra. This fine artist was perhaps a victim of the production as well. The final scene at the tomb of Lucia can be emotionally wrenching, one of bel canto’s most beautiful showpieces. Mr. Beczaia however stood in the marble box by the marble obelisk gave the maestro a run for his money.
Michael Milenski