Verdi looks ahead, Wagner looks back. It is hard to tell if the current production of Wagner’s Die Meistersinger von N¸rnburg on the War Memorial stage looks forward or backward. Happily it is a return to an international production standard, increasingly rare at SFO, with British stage director David McVicar’s 2011 Glyndebourne version of Wagner’s masterpiece.
The conceit of the production seems to be that there are no cuts whatsoever to Wagner’s score. This resulted in an evening of five hours and forty minutes. Knowingly conducted by Mark Elder it did feel somewhat briefer than that, maybe like just about five hours. Still it was a long, very long evening.
This excellent conductor, once the music director of English National Opera, gave a firm, powerful and satisfying traditional hand to the famous overture, a tone that dissolved into a convincing lyricism that prevailed for the duration.
The David McVicar production was all about home-spun tradition, in fact the most moving moments of this lovely, emotional evening were Hans Sach’s admonition to Walther that he respect artistic tradition and Walther’s acquiescence to such respect.
As Wagner intended the philosophical and artistic meat of the opera was the shoemaker Hans Sachs. The real i.e. historical Hans Sachs shoemaker lived to the ripe old Renaissance age of 82, and there are those of us who remember the silver haired Hans Sachs of the four [!] SFO Meistersinger productions between 1959 and 1971. Just now the youthfulness of 43 year-old British baritone James Rutherford — an accomplished artist of wide expressive range — seemed at odds with the gravity we wanted and needed to award Hans Sachs for the first two acts. 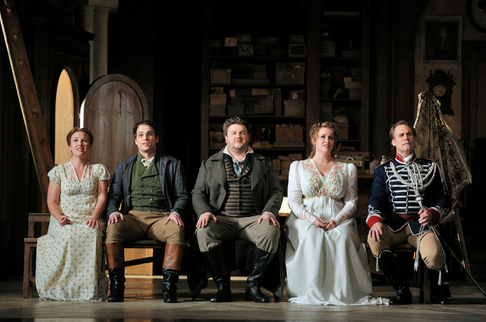 The Act III quintet
But with Hans Sachs extended soliloquy that dominates the first scene of the third act we entered into a real and tortured, not yet age-resigned psyche. As Hans Sachs uncovered and contemplated a portrait of his dead wife and child his conflicts gained an apparent philosophical realness that took us to the elusive, profound plane Wagner wished to achieve. This high minded angst then dissolved into the famous quintet, the love triangle (Sachs, Eva and Walther) holding hands with the lesser beings (David and Lene) in a simple, soft lyricism that forsook the musical gravity that should illuminate this magnificent moment and make it magical. 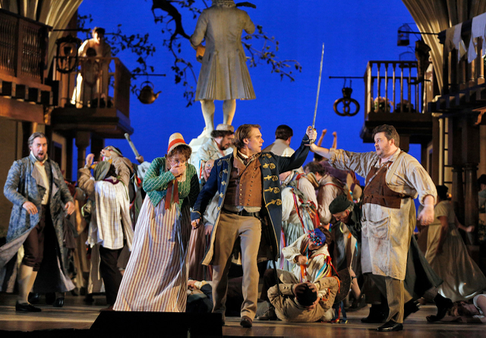 Ain Anger as Pogner, Rachel Willis-Sorensen as Eva, Brandon Jovanovich as Walther, James Rutherford as Sachs
The McVicar production and the Mark Elder orchestra more than anything else worked to demystify Wagnerian thought and to quell Wagnerian rhetoric. Further example were the phenomenal complexities of mid-summer night riot chorus graphically reduced to a few dancers and children cavorting across the front of the stage, and as more example, the phenomenal choral complexities of the mid-summer day celebration graphically defined by three jugglers on stilts — fortunately the solidity of the musical preparation was not compromised by the fragility of the precarious balancing and juggling.
Director David McVicar’s slick stagecraft was always supported by conductor Mark Elder’s direct lyricism. As intended on the stage and from the pit the result was anything but intimidating and this despite the extraordinary length that was so wittily and unnecessarily imposed.
The production discretely toyed with Beckmesser, revealing but not dwelling on the famous anti-semitic polemic inherent to this opera. Here Beckmesser was superbly enacted by German baritone Martin Gantner who towed a very fine line between ridicule and caricature. Distinctly costumed in all-black he somehow evoked our sympathy within the larger warmth of the production. However at the end Beckmesser the Jew was left seated at the extreme edge of the stage, far from and pointedly exiled from the Wagnerian reconciliation of art and love.
San Francisco Opera’s casting perhaps inadvertently supported the home-spun nature of the production as it unfolded on the War Memorial stage. With the exception of the two baritones it was unpretentiously cast. Montana tenor Brandon Jovanovich was a vulnerable Walther whose prize song (“Morgenlich leuchtend im rosigen Schein”) was just persuasive enough. Eva was sung by recent Houston Opera Studio graduate Rachel Willis-Sorensen whose tone I found shrill and whose vocal strength was not sufficient to hold together the quintet (not all my friends agree with me). Alek Shrader was vocally miscast though an exquisitely charming David while Sasha Cooke as Magdalene was vocally splendid. German bass Ain Anger as Eva’s father Veit Pogner added a further homey touch, his first act monologue shakily delivered.
It is a very great pleasure to hear San Francisco Opera’s fine orchestra and chorus in service to a fine conductor and a solid production.
Michael Milenski