Graham Vick deconstructed Wagner’s timeless musical myth of the gods of power and wealth into twenty-first century proportions, propelling Wagner’s nineteenth century, early industrial age to a destiny unimaginable, certainly unacceptable to Romantic idealism. The original catastrophic conclusion Wagner envisioned for the gods was absolutely real then, and perhaps from those final sublime moments of Gˆtterd‰mmerung our modern social democracies have emerged.
But in Palermo Graham Vick rediscovered and revealed the Wagnerian catastrophe for the post-industrial age, may we say for our post-democracy age. The outcome is devastating and there is no sublimity. But make no mistake, all this unfolds in mythically musical terms that are purely Wagnerian.
Graham Vick built this concluding episode of Wagner’s epic in Brechtian language. An empty stage, a small green mound, some plastic chairs, a white platform, an Eames chair, a beat-up old caravan plus a huge, broken metal lighting tree that was surely Wotan’s ash tree! 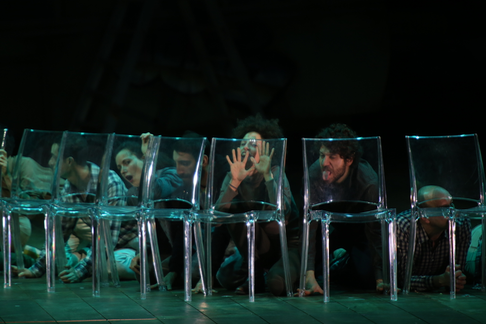 The Rhine, Act III
But it was far huger than these few props. The theater itself, its 1358 spectators were enveloped within the action, the foyers echoing with the fanfares, Hagen shouting insults seated in the tenth row, Gunther triumphantly dragging Br¸nnhilde down the center aisle onto the stage. And finally, in the end, we became aware that we were the Rhine itself, the ring thrown into our flood by the hoard lined across the stage apron, their suicide vests ticking.
Graham Vick totally humanized Wagner’s mythological compendium, Grane was a fine, strong young man with a chair onto which Siegfried mounted. During his orchestral journey to the Rhine the stage became flooded with innumerable strong, beautiful youth who moved with purpose and grace, the mighty Rhine, its mighty spirit. This was the truly sublime moment of the evening.
In the beginning the three norns had been seated at a table, the broken thread were the twigs of the ash tree that became the fuse of the bomb they constructed and placed in the backpack Siegfried picks up. At the end if Br¸nnhilde and Grane’s immolation was moving it was also equally terrifying as we understood that it was the same suicide that constitutes the final mass suicide image, Wagner’s sweet and beautiful music flooding into the bombers’ broad smiles — it was the ultimate Wagnerian irony. 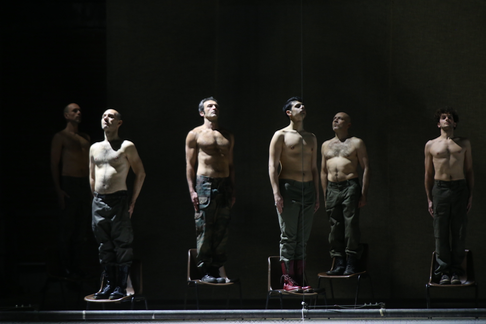 The hero horses on Valhalla
The spine tingling moment of the evening was however not the end of the opera, instead it was the visit of the Valkyrie Waltraute who tells Br¸nnhilde of Wotan’s council with his gods wherein he informs them that he has constructed the pire for Valhalla’s destruction, and that he has sent two ravens to bring news of the world below. Waltraute is elegant, her horse is a handsome young compassionate hero, her entreaties that Br¸nnhilde sacrifice the ring are maximally eloquent — fifty or so handsome young hero horses are suddenly revealed at rigid, bare chested heroic attention. But her supplications go unheeded thus she mounts her hero horse and disappears. It was the climatic scene of the evening.
Wotan’s ravens do appear in the world below, two black clad mimes in dark glasses who introduce the prelude to the third act. In the end Br¸nnhilde will dispatch them back to Valhalla. You know the rest.
Graham Vick’s mastery of theatrical languages in no less than astounding. His intuitions of the terrors of our present world and their connections to our artistic past are profound. The images he creates are not simple metaphors but remain rich poetic intuitions to be embraced rather than defined.
Wagner’s score and the individual performances were subsumed into this evening of powerful theater. If conductor Stefan Anton Reck’s tempos at times seemed slow they finally well served the staging. If the winds of the orchestra of the Teatro Massimo could not help bringing inappropriate lyricism to Wagnerian line, the brass and particularly the strings created the continuum that could be beautiful, inspiring and terrifying. 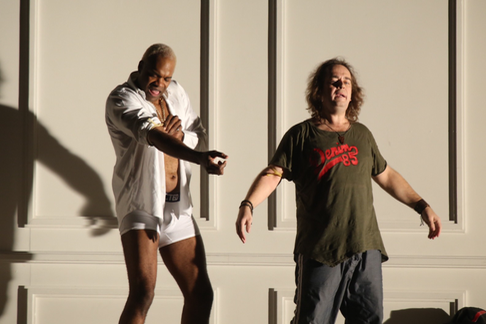