To mark their recent merger, the Dutch National Opera and Ballet companies are collaborating as equal partners for the first time. Last season, DNO presented Sasha Waltz’s choreographed opera L’Orfeo, which was favourably received. But while her Monteverdi was dramatically lucid and moving, this RomÈo et Juliette, which premiered in 2007 at the OpÈra Bastille, is inchoate and emotionally hollow. The music, rich in thematic tracery, willingly lends itself to Tanztheater’s fusion of dance, movement and drama. The plot lacks linearity and only one of the three vocal soloists plays a character, Friar Laurence. He only appears in the final cantata, to harangue the warring Capulets and Montagues, a double chorus, into a peace treaty. The orchestra takes on the main roles. Rather than retelling Shakespeare, Berlioz tried to capture his genius in music that is both wonderfully descriptive and wrenchingly evocative. There is the clink and glint of clashing rapiers in the opening fugue, and profound longing in RomÈo seul, which contains the seed of Wagner’s Tristan chord. The great love scene is achingly beautiful and Mercutio’s Queen Mab speech is transliterated into the flitting filigree of the Scherzo. 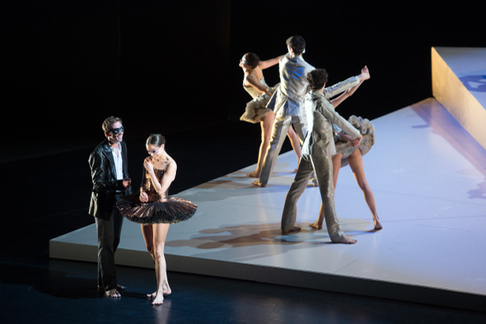 Igone de Jongh as Juliette and James Stout as Romeo
Choreography could have fleshed out the plot and complemented the orchestral characterization. This staging, however, is vague, emotionally dormant and at times utterly wrong-headed. It is very handsome visually, thanks to Bernd Skodzig’s black and cream costumes, which understatedly reference the Isreali-Palestinian conflict. Specific characters are assigned, but it was difficult to tell who was who. Romeo’s lovingly teasing friends, Mercutio and Benvolio (Bastiaan Stoop and Peter Leung), were the most clearly drawn individuals. Dancing barefoot, the cast deftly executed the jerky, twitchy steps, linking their bodies into sinuous chains. At first they were confined to an inclined platform, one of two white surfaces forming what could be taken for a book. The reduced space precluded runs and spectacular jumps and some of the sequences became repetitious. Attempts at humour fell flat. The Capulets scoffed their banquet like hogs at a trough and the dances at the ball were irritating nervous tics. The drunken guests walked tortuously home like puppet zombies. None of this was funny. Once the ramp was hoisted up, opening the book, the choreography became more spacious. But then, puzzlingly, the music paused. Romeo danced his desperation unaccompanied, trying to scale a smooth wall.
At least James Stout, moving in short, energetic bursts, got a chance to give Romeo an emotional profile, as opposed to Igone de Jongh as Juliet. She is a slender dancer who moves in long, fluids line, but, limited to sudden jumps and propeller arms, she was all elbows and other angles. During the balcony scene there was no hint of chemistry between the lovers. They kept gingerly running away from each other and then colliding amicably. Juliet was directed as a worldly-wise girl for whom the secret meeting is mildly rebellious fun — hardly the state of mind that would motivate elopement, feigned death and suicide. Ironically, Ms De Jongh was most graceful and tender as a sleeping corpse, when the mourners gently lifted and swung Juliet at her funeral. 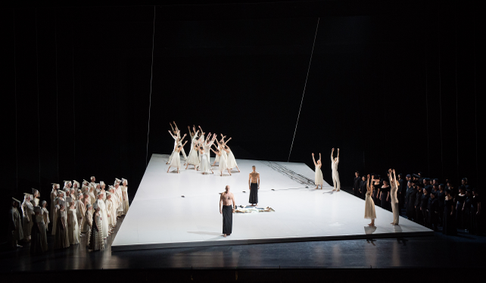 Failing to compensate for the theatrical aridness, the Netherlands Philharmonic Orchestra under Kazushi Ono sounded under-rehearsed in a grey, matted performance. The usually excellent woodwinds lacked expression and the brass skidded in harshly over and over again. After a tentative Introduction, a leaden Prologue was somewhat relieved by Alisa Kolosova’s full-bodied mezzo-soprano — a thing of beauty, despite undifferentiated diction and a vibrato that widens slightly on the top notes. Tenor Benjamin Bernheim then delivered a snappy, bright-toned Scherzetto. After that, dullness had the upper hand until the poignant funeral dirge by the Dutch National Opera Chorus. Even they, affected by the general malaise, were no more than efficiently competent most of the time. Diffuse orchestral phrasing marred Romeo’s melancholy pages and the enthralling love scene was, just like the pas de deux, devoid of lyricism. The Mab music buzzed aimlessly like a fly trapped in a jar. Applauding politely, the audience only cheered for bass-baritone Paul Gay, maybe because he shook it from its torpor with his resounding “Silence!”. It was a slight shock when he came out in a black sarong, belatedly revealing that the athletic Vito Mazzeo, in identical garb, was, in fact, his dancing counterpart. Mr. Gay sang persuasively, with a firmly anchored lower range, and he and the chorus provided a confident, if not exactly rousing, finale. Here’s hoping that the next joint venture by the National Opera and Ballet will be more fortunate that this one.
Jenny Camilleri