“Lavish” may not be quite the right word, for while Brad
Dalton’s direction and scenery were mightily effective, they were
daringly spare. The orchestra is placed upstage behind a simple platform that
juts out toward the audience over the usual pit. This creates an immediacy that
allows director Dalton to make every gesture connect. Every nuance of character
relationship has a visceral impact.

On that playing space, designer Dalton has simply added a host of wooden
straight back chairs, a kitchen table, a double bed, a trunk, and a few simple
props. It is difficult, nay dangerous, to be this simple, but the risk paid off
in spades. These homely set pieces were endlessly re-configured in all manner
of interesting patterns by a mute “Greek chorus” of particularly
attractive, buff and (many) shirtless young men.

This conceit was quite a brilliant theatrical effect. The young men
represent Blanche’s multiple past partners, and they often accompany her,
distract her, dog her, and define her. They are not omnipresent, but their
appearances were very well-calculated, none more so than when they surrounded
Blanche and Stanley as he raped her down center stage. Forming a semi-circular
barricade with their backs to the audience, torsos bared, they pulsated down
and up as one to suggest the mounting fervor of the sex act. 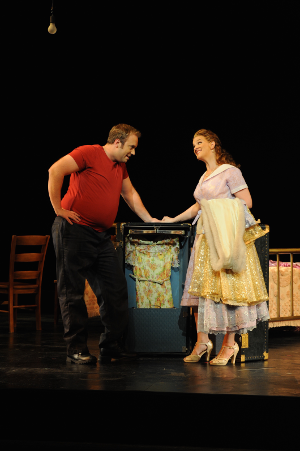 The fluidity of the set piece placement also allowed for great variety in
the blocking and the visual impact was heightened exponentially. It
didn’t matter that the table was not always in the same place, or the
bed, or the trunk, or the imagined doorways. The effect was as unsettled as
Blanche’s emotional state. The usual two story set was deftly suggested
by having Eunice simply stand on a chair and “yell down” from the
second story when required. Mr. Dalton’s direction was a model of
creativity and restraint.

The only final scenic element was a bare bulb hanging off right center. This
is needed for the paper lantern to temporarily cover it, serving as a potent
Tennessee Willams metaphor: hiding the truth under pretty trappings.
Capitalizing on that basic “illumination,” David Lee Cuthbert
conjured up a bewitching and moody lighting design that not only partnered
beautifully with Mr. Dalton’s concept but also greatly magnified its
impact. Mr. Cuthbert’s meticulous blending of area lighting, specials,
gobo effects, and the judicious use of follow spots was really quite
splendid.

Johann Stegmeir’s costume design was also well considered, especially
for the men and secondary women. For Blanche, Mr. Stegmeir made her more
glamorous than usual, in fact, was she too attractive? The “usual”
design renditions of this classic script at least hint at decay, faded glory,
and a slightly moldy New Orleans, its Old World allure fraying around the
edges. With the minimalistic set elements, the one place this milieu might have
been conjured was in the costumes. The attire was wonderfully constructed and
carefully selected, but might have been more characterful.

In the pivotal role of Blanche DuBois, Ariana Strahl was a real star
presence. This is arguably one of the most complex roles in the English
language theatrical canon, and Ms. Strahl did not shrink from its mighty
challenges. She sings it beautifully, with a ringing soprano possessed of
considerable beauty, assured technique, even production throughout the range,
and consummate musicianship. Every move she made was motivated by the drama,
and ably conveyed the script as musicalized by Mr. Previn.

What Ariana does not embody just yet is the haunted quality that permeates
her being, the barely suppressed emotional turmoil, and the encroaching
dementia that informs her practiced deceptions. Yes, Blanche needs all of that,
and then she must sing demanding music, too! Ms. Strahl is young, she is highly
gifted and smart, attractive and empathetic, so there is no doubt she will grow
into this part and fully discover its many facets. She deserves to have many
more outings as Ms. DuBois.

Stacey Tappan was nigh unto perfection as Blanche’s simpler sister
Stella Kowalski. Her silvery soprano was captivating and shimmering. Her easy
delivery of the top register was matched by a well-focused tone, which found an
exciting presence in the middle range where much of the
‘conversational’ vocal writing lives. She was wholly believable in
her blind love and physical attraction to her husband Stanley.

While the two male leads sang powerfully and made impeccable vocal
impressions, they were physically miscast. Opera San Jose has a wonderful
roster of resident artists who serve effectively in a wide variety of roles all
season long. However, this can result in the occasional odd match-up. The
accomplished baritone Matthew Hanscomb has the perfect physique for the
sympathetic role of Mitch, the lovable, slightly hangdog teddy bear.
Unfortunately, Mitch is a tenor role. Stanley needs an animal allure, an
effortless sexual appeal. While Mr. Hanscomb sang the part with power, insight,
and flawless delivery, no matter how much he committed to suspending his own
disbelief that he was a chick magnet, he couldn’t suspend mine.

Conversely, the rather lumpy good-boy Mitch was here impersonated by the
handsome, trim, preppy tenor that is Kirk Dougherty. Again, a terrific
vocalist, in total command of his considerable resources, showing off a total
understanding of what he is singing, and pouring his heart out as he regales us
with a honeyed, attractive lyric instrument. But when the script requires him
to say he is out of shape, and that he weighs “190 pounds,” well
Mr. Dougherty does not look as though he could tip that scale even soaking wet
in several layers of winter clothing. Still, these two men are real company
assets, and within their own physical realities, they give their all to the
commendable ensemble effort.

Xavier Prado did double duty with a nicely sung Young Collector, and as a
ghostly presence as Blanche’s young husband who killed himself. Cabiria
Jacobsen was a brazen and appropriately shrewish Eunice Hubbell, and she
clearly relished her bitchy pronouncements. Michael Boley was an amusing and
firm-voiced Steve Hubbell, a perfect foil to Ms. Jacobsen’s domineering
spouse. Teressa Foss was a fine presence as both the Old Relative and the stern
Nurse. Silas Elash proved a solid Doctor and ably held his own in the crucial
denouement.

In her poignant aria, Blanche urges “I want magic!” Conductor
Ming Luke seemed to have answered her demand, and he made a significant case
for Previn’s uneven score. Even at times it seems the writing is all
effect and little substance, Maestro Ming paid that no never mind, and plumbed
the score for all it was worth and occasionally, more. The absolute commitment
to the idiomatic jazz licks is integral to the success of the sound and
throughout, the accomplished orchestra responded with a reading of sensitive
conviction and cumulative power. Exposed instrumental solos were exceptionally
pleasing, especially the sinuous trombone phrases.

Ming Luke managed to make an unfamiliar piece accessible to a willing
public, he forged a reading that had a logical dramatic/musical arc, and he
commanded all his forces in a taught ensemble effort.

Opera San Jose’s impressive A Streetcar Named Desire should
be required viewing for all who care about adventurous programming and
first-class stagecraft.