This reviewer saw the performance on June 19 which began with a celebration in the theater’s open galleria featuring free beer and sausages. Eventually, the onlookers realize they have become part of a grisly spectacle. As they ate and drank, they celebrated the hanging of Sarah Osbourne.
Sarah was said to be the personification of evil because she killed her abusive husband and their two small children. Sarah, sung by mezzo-soprano Peabody Southwell, opens with her Confession, so unlike most operas, this work begins with a major aria. Southwell sang it with a tapestry of vocal colors that made listeners wish to hear more from her. Unfortunately, she did not sing again until the finale.
After the hanging, Marc Kudisch, as showman Joshua Crouch who has made a business of conducting public dissections, herded the audience into the theater. He reminded everyone that “gentlemen” who had paid their fees were invited to the anatomical exercises. Stage Director Bob McGrath based Crouch’s enterprise on the commonly-held eighteenth century thought that evil could be present and visible in the internal organs of a law breaker. Anatomy Theater, which has music by David Lang and a libretto by Lang and Mark Dion, points out vicious prejudices of the past and forces us to realize that remnants of them may still exist in contemporary social fabric. 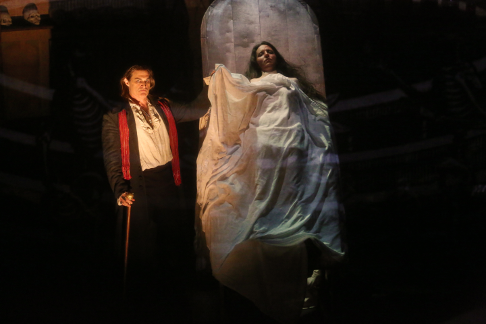 Marc Kudisch as Joshua Crouch and Peabody Southwell as Sarah Osborne
Mark Dion’s surgery contained only necessary furniture and a complete set of the tools needed to cut up a human body. In front was a scrim on which the audience could watch Bill Morrison’s fascinating surgical videos and Laurie Olinder’s monochrome but imaginative projections. Costume designer Alixandra Gage Englund dressed her characters in the neutral-colored everyday clothes of the time and supplied authentic dresses for the serving women who brought the refreshments into the galleria.
As Crouch, Marc Kudisch projected his lines with the resounding tones of a carnival showman. Robert Osbourne, who portrayed Baron Peel, has a gorgeous bass-baritone voice that he seemed to rein in to fit the show’s musical theater format. Portraying Ambroise Strang, the tenor, Timur, sang with well-focused high tones as he “extracted” the organs from Sarah’s body. Ably led by conductor Christopher Rountree, the ensemble Wild Up played Lang’s music with gusto. Scored for trumpet, flute, piccolo, percussion, piano, accordion, violin, viola, cello, and bass, the composition was reminiscent of Kurt Weill accented by prominent percussion and a mixture of twenty-first century sonorities.
When the last of four major organs, Sarah’s heart, was cut out, Strang sang that it, like the others, was in good order. Only then did the victim began to sing of her plight and the love she bore for the children she had killed. Although I wonder why she thought no one else would raise her children, I realize that Sarah’s hopelessness was not unique to her time. Sarah’s “evil” was simply desperation in the face of a prejudiced, uncaring town.
California audiences will get a chance to hear Peabody Southwell again when she sings the title role in the Tragedy of Carmen at San Diego Opera next season.
Maria Nockin