Everyone knows that Don Carlos was written in French, and premiered in 1866 at the Paris Opera. Like all grand opera productions in Paris it included a ballet. An Italian translation quickly surfaced for performances in London the next year and then in all major Italian theaters. All sorts of modifications to the opera’s extraordinary length were taken, resulting finally in the Verdi sanctioned four act, no ballet La Scala version of 1884. It is said that Verdi may not have objected to the addition of the original first act (in Italian) for performances in Modena in 1886.
And therefore in San Francisco in 2016. Don Carlo has been done in San Francisco both in the four-act La Scala version and in a five-act Don Carlos French version, though without the ballet (Verdi originally insisted that the opera must include the ballet). With hoped for new directions at San Francisco Opera perhaps we will some day soon have the opera as Verdi intended.
It can come as no surprise that the Italian language Modena five-act version was chosen for these performances given that Italian conductor Nicola Luisotti is the SFO music director. Though an unexpected double-take could not be helped when we heard words that simply do not belong in Fontainebleau. While strange words were probably not meant to be the old theater trick of putting the audience on edge (stage directors sometimes do it by forcing blinding light into your eyes), it had that effect.
So it was as if we were hearing this magnificent opera for the first time. Conductor Luisotti held us spell bound for four and one half hours, every possible quiver or roar of emotion poured forth, never once did we feel the score being pushed for effect, nothing too fast, nothing too slow. Always the Verdi genius was foremost (and not the conductor’s). Evidently Luisotti had met his match. Finally. 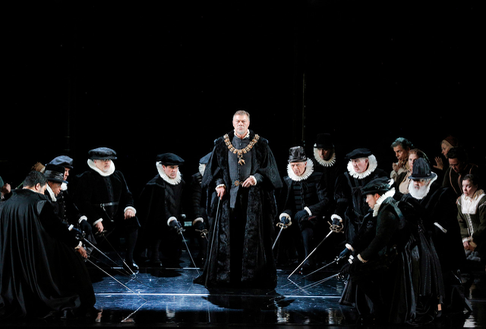 RenÈ Pape as Philip II
In the fourth and fifth acts this Don Carlo venerated the centuries old, creaky, passÈ opera seria style with its succession or arias. After King Philip’s momentous “Ella giammai m’amo” Rodrigo dies with his very moving “Per me giunto È il dÏ supremo.” Then there is the most trying aria in the repertory, not because of emotional or technical difficulties but because it is of extended length and comes four hours into the opera. Philip’s wife and Don Carlo’s lover Elisabeth delivered “Tu che le vanit‡ conoscesti del mondo” in such exquisitely soaring voice that an already exhausted audience gave it the biggest ovation of the evening!
On the basis of the casting, American tenor Michael Fabiano as Don Carlo and Polish baritone Mariusz KwieciÈn as the Marquis of Posa the opera could well be renamed Carlo and Rodrigo as these two splendid singing actors made this opera more about the love of two men — sublimated into freeing the oppressed — and its ramifications than about the thwarted betrothal of Don Carlo to Elisabetta and its ramifications. From the first moments of the pasted on first act, Don Carlo’s romance “Io la vidi” (better known as “Je l’ai vu dans son sourire”), we knew that tenor Fabiano was born to this role, finding sufficient Verdi vocal heft and color to compete musically with kings and queens and a spurned woman while he sustained the character of a weak and troubled epileptic youth. Rodrigo, the Marquis de Posa, baritone KwieciÈn found the seductive, the duplicitous and the sacrificial, confusing everyone with beautiful, convincing singing. Both men — and maybe most of all Verdi — made this edgy staging very real and very moving.
The opera Don Carlo is also about power — ecclesiastical and secular power. Power is a very complicated question in the Verdi oeuvre and he discusses it in great depth in Don Carlo. Here King Philip II usurps his son’s fiancÈ to gain political power, and finally gives his son to the Inquisition to maintain his power. The Philip II of bass RenÈ Pape found very real humanity for this unhappy king in the always touching “Ella giammai m’amo” but otherwise did not create the overwhelming sense of suffocating authority that might underlie these four and one half hours.
Andrea Silvestrelli was over parted as the Grand Inquisitor, his roughness of voice and tired presence did not adequately color the manipulative cunning and sinister reasoning of such an instrument and technique of power. Still the famous bass duet was convincing in its revelation of the weakness and vulnerability of Philip II. The old monk who begins and ends the opera (the four act version) was sung by Adler Fellow Matthew Stump. An old, tired presence would be preferred to balance the maturity of the cast, and the maturity of the subject matter of the opera.
Texas soprano Ana Maria Martinez brought us a beautifully sung if pallid Elisabetta — the role itself does find much presence in this male world until the fifth act aria (see above) when she essentially has the last word, decrying the vanities of the world. Verdi’s snarling mezzo, Eboli was well sung by Bulgarian mezzo soprano Nadia Krasteva who fulfilled her function as catalyst for Philip II’s lament without ever have fully taken the stage, even in her famous “O don fatal.” 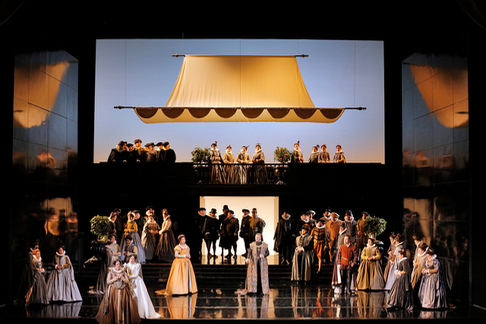 Production by Emilio Sagi, set design by Zack Brown
The pedestrian production was the remount of a 1998 San Francisco Opera production by Spanish director Emilio Sagi (note that all productions in this spring season come from 1998). An opera of the stature of Don Carlo and a quality cast deserve a production that can plumb the theatrical depths of this masterpiece.
If this 2016 early summer San Francisco Opera season had some real interest, consider the 2017 early summer season: Rigoletto, Don Giovanni and La Boheme, all in oft re-cycled productions.
Michael Milenski