Alban Gerhardt chose to reveal a different Concerto – one that is introspective, tender and haunting, and whose passion is communicated through
concentration rather than through overt virtuosity and spontaneity. It was a performance which demanded listeners’ unwavering attention: a brave demand in
the cavernous Royal Albert Hall which does not provide a sympathetic acoustic for solo cellists. Indeed, it was a performance which threw a challenge to
the accompanying Royal Philharmonic Orchestra too: I’m playing quietly, so you’ll have to pipe down if you want to hear me!

But, despite its reflective mood, Gerhardt’s rendition was anything but underwhelming; indeed it was so absorbing that it made imagine one was in a much
more intimate environment. If we had to lean in and focus intently to hear the quietest passages we were rewarded by playing of exquisite refinement, as
the cellist seemed to seek something intangible in Dvo?·k’s score, reaching deep beneath the surface. Not for Gerhardt heart-on-sleeve emotion or vigorous
attack; rather, the pensiveness of a German lied, delivered with control and eloquence, supported by a flawless technique. He took great care to shine a
light on the details, finding clarity and precision at the top and bottom of the range.

The Adagio ma non troppo was the heart of the performance. Infused with the composer’s love for JosefÌna ?erm·kov· – his passion was never
reciprocated and Dvo?·k married her sister, Anna – and with the melodies of JosefÌna’s favourite song, Dvo?·k’s own Op.82 No.1 ‘Lasst mich allein’ (Leave Me Alone), the second movement was dignified by sadness; simplicity rather than showmanship was the touchstone. Gerhardt seemed to be
thinking like a singer. From the first phrase the moulding of the song was beautiful, blending melodiously with the low oboe. The tempo flowed with a
strong sense of the architecture of the whole movement.

Charles Dutoit and the Royal Philharmonic Orchestra did not always seem to be on completely the same wave-length as their soloist. The first movement
begins with a long orchestral introduction and this was rather tentative and lacking in warmth. Solos from the horn and clarinet were accurate but could
have had more life – enriched as they are by the energetic patriotism of the composer’s love for his homeland.

Dutoit set out to match his soloist’s delicacy of approach but the RPO needed firmer guidance, for the results were cautious. It’s a long wait for the
soloist, but with his first tonally vibrant entry Gerhardt took command and established a more intense focus and direction: the opening note had such
presence, as if he was declaring, ‘This is my concerto now …’

Technically Gerhardt was untroubled. In the first movement, the rapid spiccato flew, dense chords progressed fluidly and there was a sense of
urgency, especially when the cellist reached to the top of the A string. In the second-movement cadenza Gerhardt drew out the double-stopping and swiftly executed the
left-hand pizzicato, building to an exciting stringendo, characterised by lovely dialogues with the woodwind and some particularly fine
clarinet-playing.

Despite the spaciousness of Gerhardt’s interpretation, the momentum never flagged; in fact, the cellist seemed to want to push forward, and was often a
fraction ahead of Dutoit and the RPO, meaning that the cadences to the climactic passages perennially put the brakes on. This was particularly noticeable
in the third movement, where the first entry of cello ratcheted up the pace by the slightest of notches. I felt that Gerhardt wanted a tenser beat, not
necessarily much faster but with more crispness. Some of Dutoit’s rallentandos and rubatos lessened the impetus. 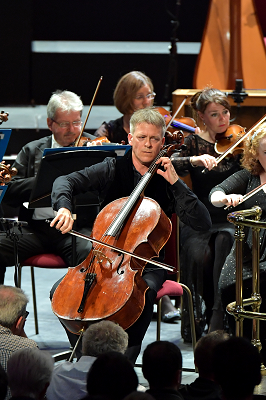 The accompaniment might have been tauter with more emphasis given to both the lyrical nuances and the Bohemian energy of the rhythms, but this was a solo
performance characterised by mastery and civility. Both of these qualities imbued the encore – Gerhardt’s professed favourite among Bach’s solo suites, the
Prelude of the D major Suite BWV1012 – with potent expressivity.

Gerhardt must be approaching nearly 200 performances of Dvo?·k’s Concerto; in a programme-booklet interview Hungarian mezzo-soprano IldikÛ KomlÛsi tells us
that she has sung the role of Judith in BartÛk’s Duke Bluebeard’s Castle more than 150 times, but there was no lacking in freshness or
incisiveness in her performance, with bass John Relyea as the eponymous menacing anti-hero. If Gerhardt took us on a journey to Dvo?·k’s Bohemian heart
then in this dramatically compelling musical narration the Royal Philharmonic Orchestra and Charles Dutoit searched deep inside Bluebeard’s soul,
penetrating to the depths and finding as much sadness amid the darkness.

In the spoken Bard’s Prologue Relyea declaimed in a lovely speaking voice, inviting the listener in, ‘How shall I tell the story?’ There were
hints of the resounding bass that would challenge us later – the command to ‘Listen and marvel/ladies and gentleman!’ was uttered quietly and low, followed
by a salient pause. The slow ponderousness of ‘Old is the castle, and old the tale that tells of it’ had an innately ominous weight: it
placed the burden on our own interpretation – ‘Listen in silence’.

There was a sombreness in Relyea’s sensitive delivery from the opening phrases as he showed his new bride his castle, ‘Not a cheery place like your
father’s’, which were countered by the expectant brightness of Judith’s optimism, yet confirmed by the dark foreboding of the orchestral timbre.

Such dualities characterised Relyea’s Bluebeard; he was both satanic and sentimental. At times, the voice was reticent conveying a genuine, and touching,
pathos and pain. Utterances had sincerity: ‘Your sweet hands are blessed, Judith’, he declares, when she asks for the keys to his locked rooms. But, Relyea
could turn from softness to iron. When tells her to be careful, ‘Go with breathless caution’, the controlled vibrato and penetrating warmth betrayed true
feeling; but, this was swept aside by a harder tone when she views his armoury, enhanced by the military brightness of the RPO. Then, Bluebeard utters a
desperate pathos of sigh, ‘Judith, Judith’, when she demands the keys to the remaining doors: who could not be touched by this sob from the soul,
especially when the beautiful plangent string playing drew every ounce from Bartok’s heart-tugging harmonies.

Relyea’s upper register retained heroic attractiveness and virility, but this was mingled with desperation: Bluebeard calls to his doomed bride before the
last two doors are opened, ‘Judith, Judith, I must kiss you’, and the subsequent orchestral glissandi slithers showed the hopelessness of resisting his
tragic destiny, ‘Judith, Judith, do not open!’

My ability to comment on the Hungarian diction is negligible, but following the libretto I couldn’t detect any significant difference between the two
singers. Bluebeard’s dreadful sigh when tells her that behind the sixth door are ‘Tears, my Judith, tears, tears’ was a heart-pummelling throb in the
throat. But there remained defiance; Relyea flung his cries of ‘Take it, Take it’ to the violent thumps and tempestuous whirls of orchestra as Judith
opened the last door, but his strength dissipated into a terrible vulnerability as he revealed the ‘Hearts that I have loved and cherised’. Relyea’s
performance was Shakespearean in its tragic depth; like Lear he remained defiant – his dead wives will ‘live immortal – All is theirs now, all my
treasure’. Such dignity was painfully bold.

KomlÛsi’s used her fantastic chest register to delineate Judith’s vitality, sensuousness and hopefulness; even when assailed by blood on the castles walls,
the veiling of her vibrancy was short-lived and shallow as she declared that she longer craved ‘daylight/ Roses, sunshine, they are nothing’. There was a
horribly portentous gleam to Judith’s ecstatic cry that they are ‘All in darkness’ and real vitality to her conviction that ‘I shall breach these ramparts.
… Bright as gold your house shall glitter’. 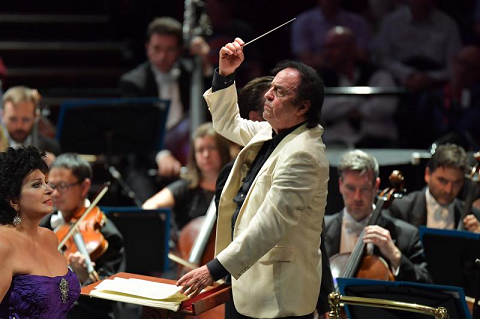 KomlÛsi used quite a wide vibrato to make the voice carry at the top and the tuning went a bit wayward at times. But, in the middle of her voice there was
a teasing voluptuousness to the sound: one could see what had attracted Bluebeard. Yet, this was coupled with a convincing naivety; even after the fifth
door had been opened, she could credulously ask, ‘What are these grim clouds portending?’ There was great poignancy at the opening of sixth door, and if
KomlÛsi tired towards the close, this was not out of keeping with Judith’s emotional exhaustion and defeat.

Dutoit and the RPO were superlative storytellers. The orchestral crescendos and sforzandi had a vicious bite, while still being tonally beautiful. The
orchestral barrages were violent, and the sparse textures were pointed and perfectly tuned. Woodwind scurries and percussive batteries were hard-edged and
incisive; the brass explosions and snarling dissonances made one tingle.

Dutoit conjured a transparency which made every gesture tell. The sustained trumpets, solo violins and descending horns painted a shimmering ‘mountains of
gold’ which was menacingly marred by flute and oboe dissonances. The dolce sweetness of the verdure which rests behind door four was given presence by the
restful horn solo, as sunshine shone on the flower-laden branches in the blue-green garden. And, there is no visual image that could match the impact of
the horrible grandeur which lies behind the fifth door: as full orchestra and organ move through thrilling sequences of parallel chords, in blazing
defiance, every nerve-ending in the RAH must have shuddered.

In contrast, clarinet and horn conjured the poignant lake of tears beyond the sixth door; slithering shivers of harp, clarinet and flute against a dark
bass outline made the spine tingle, eased by the sensuousness of Judith’s disavowing request that her lord ‘take me, love me’ after seeing the lake of
tears. There was a terrible renewed energy in the chromatic climbing lines when Judith has ‘guessed his secret’.

This was a fantastically captivating orchestral narrative; even though we know the protagonists’ fate there was tension, fear and hope. Dutoit never let
the moments of pathos linger, but swept them up in the inexorable tragic path.