La donna del lago is from Naples’ Teatro San Carlo in 1819. Rossini masterpieces abound in these years, though they were not always appreciated by the fickle Neapolitan audience who in 1818 had wildly applauded Spontini’s La Vestale and decried Rossini’s Ermione. Consequently in 1819 Spontini had a contract for two new operas at San Carlo and Rossini had none! Circumstances forced Spontini to back out, but Rossini, always ready, took over the contract.
The novels of Sir Walter Scott were in the air in French translation. It is fairly likely that La donna del lago was originally intended for Spontini. But Rossini gets the credit of creating the first Italian opera based on Scott’s wildly popular, colorful novels that gave first definition to European theatrical Romanticism!
The now infamous Venetian stage director Damiano Michieletto staged La donna del lago just now in Pesaro. Last year at Covent Garden Michieletto had Jemmy, William Tell’s son compare his father Guillaume Tell with a comic book William Tell brought alive, played by an actor who remained on stage for the duration of that opera. In recent years in Pesaro Michieletto has turned La scala di seta into pure run-of-the-mill TV sit-com and Sigismondo into a classic made-for-TV horror movie (low budget, low taste). 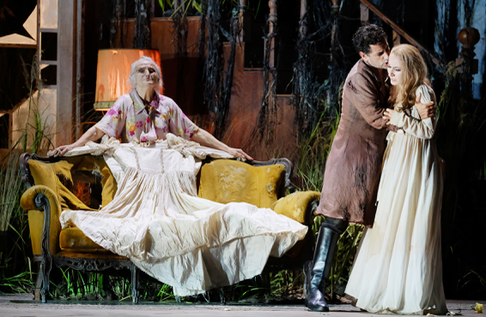 Elena double, Juan Diego FlÛrez as Uberto, Salome Jicia as Elena
It was a surprise to see Michieletto back on the Pesaro directorial roster but it was of no surprise to learn that La donna del lago had become two old folks in a probably-mid-twentieth century British Isles-someplace parlor having a spat about the wife’s infatuation with a black and white photo of the king. The couple became a duplicate, aged Elena (the lady of the lake) and Malcom, a duplicate of the opera’s pants role rebel but who (the double) was a real male. The doubles shadowed their Scottian counterparts the entire evening. Not to give it all away but towards the end the old woman falls into the lake (real water for this dramatic backflop) and Elena finds herself back in the drawing room of the opening scene. She transforms herself into the old woman while singing her final spectacular and breathtakingly beautiful “Tanti affetti in tal momento” that ends the show in the old folk’s reconciliation.
Elena was sung by Pesaro-finished (the festival’s Accademia Rossiniana) ingenue Rossini diva, Georgian soprano Salome Jicia who more than held her own amid stiff competition — Jean Diego FlÛrez as King James V who liked to wander the Scottish countryside incognito and — according to Sir Walter Scott — fall in love with beautiful young women, and American tenorino cum coglioni Michael Spyres as Rodrigo, Malcom’s brash competition (lots of leaps to forte C’s and D’s).
Malcom was sung by Armenian mezzo soprano/contralto Varduhi Abrahamyan, an accomplished Carmen as well as bel canto singer who is well able to cross dress when called upon (last spring’s Ascanio in Benvenuto Cellini in Rome as example). Her first act aria “Elena! oh tu, che chiamo” earned the huge Pesaro ovation — uniique to Pesaro these ovations extend multiple minutes and are homage to a singer, to Rossini and to simply being a Rossini afecionado in Pesaro. This fine artist is of ample voice and excellent technique, a very welcome newcomer to the limited ranks of Rossini pants role interpreters. 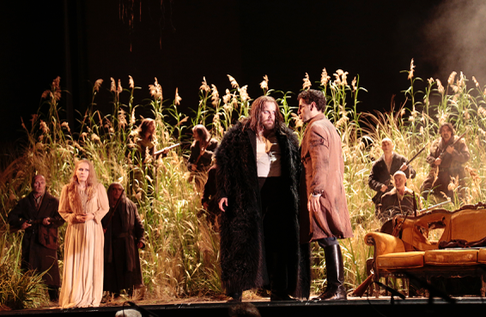 Salome Jicia as Elena, Michael Spyres as Rodrigo, Juan Diego FlÛrez as James V / Uberto
Among the great moments of the evening was the second act scena in which the incognito James V reveals himself to Rodrigo and then kills him in a duel but not before the two tenorinos deliver the splendid duet “Vendetta! accendi mi di rabbia il seno” before which the lady of the lake suggests they kill her instead of themselves even though she loves neither one of them. In these moments it is clear that Juan Diego Flores has no equal in finding the joy of singing (this the genius of Rossini) and Michael Spyres is among the few who truly deliver the excitement of a Rossini voice.
The biggest of all the ovations was however reserved for Pesaro conductor Michele Mariotti, now an international star, who has naturally absorbed the Rossinian esprit, and like no other is able to communicate it to his orchestra in the pit, here the Orchestra of Bologna’s Teatro Comunale and to the singers on the stage with whom you feel and can actually see the joining of voice to the sentient Rossini orchestra. On this occasion Mo. Mariotti’s tempos seemed more deliberate than sweeping, possibly in sympathy to Mr. Michieletto’s very precise storytelling, and possibly in response to Rossini’s newly found Romantic colors — the specific horn calls and the momentary crowning of intense moments with sharp flute tones, and the always important clarinet in introduction and duet with the stage. Strangely this evening did not come across as the great Rossini.
Set design by Paolo Fantin was indeed splendid, superimposing the drawing room on the swampy lake shore, spectacularly lighted by Alessandro Carletti. Said and done the self-consciously chic Michieletto staging did indeed enhance the evening, the doubling of Elena and Malcolm adding a dramatic depth and possibly too comprehensible human emotion to this exotic tale of long ago and far away. Would that it not have been so prosaic.
Michael Milenski