Rodula Gaitanou’s production tells the story well, and offers some probing beneath the surface – although not so much when contrasted with reports of
Stefan Herheim’s recent staging in Amsterdam. (By the same token, however, OHP does a great deal with more limited resources; it would in any case be
unreasonable or downright absurd to expect every opera production to be an event on the level of a Herheim production.) I did wonder whether the sight of
two men beneath an arch in the penultimate scene was intended as an oblique reference to Tchaikovsky’s homosexuality, but, given the darkness, it was a bit
difficult to tell. Perhaps that is the point. There is, in the late-nineteenth-century updating – time of composition, I presume – some sense of pitting a
self-consciously beautiful society against more human desires, noble and base alike. Cordelia Chisholm’s designs will certainly delight those who wish to
see ‘traditional’ productions, doubtless ignoring the fact that the opera is not set when it ‘should’ be.

The Countess seems to rule the roost in a fashion beyond what one might expect; this is, perhaps, an ageing society, unable to accept the need to change.
If I felt that some of those points might have been pushed a little harder, there is something to be said for not doing so either. We all have particular
tastes, and have no right to insist that everything should be as we should have done it; indeed, we should be willing to learn from things done differently
– and done well. I found that, on reflection, the production had more to offer than I had initially thought; there is certainly much to be said for
relative subtlety. (Just as there is much to be said, from time to time, for agitprop!) 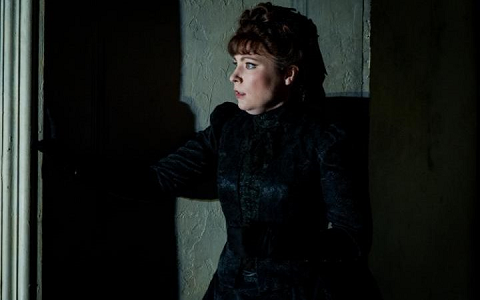 It was, perhaps inevitably, Rosalind Plowright’s Countess who made the strongest dramatic impression. Although she does not have very much to sing during
the first act – here, Tchaikovsky’s three acts were condensed into two – she held the stage just by entering, let alone by painfully, agonisingly, walking
across it with her sticks. (I thought a little of my first encounter with Waltraud Meier in the theatre: as Ortrud as Covent Garden. The character has
little to sing at all in the first act of Lohengrin, but I could not keep my eyes off her.) And the insight into her interior life, above all to
her past, was moving, evoking an historical canvas far wider than we were explicitly or even implicitly told. Natalya Romaniw did not disappoint as Lisa,
although I felt that her character came more into its own following the interval; a freer, more daring performance to be seen and heard. Again, perhaps
that was the point. Peter Wedd’s Herman was, I am afraid, harder to like. The character seemed less impetuous than annoying, somewhat generalised, even
wooden acting meaning that it was difficult to feel much chemistry between him and his beloved. As melodrama there was something to be said for such a
performance, but there was much that it lacked; a fine vocal performance might have compensated, but that was not to be either. Grant Doyle’s Yeletsky,
however, was very fine indeed: darkly conflicted, and beguiling of line.

Other, ‘smaller’ roles were all taken well, Richard Burkhard’s Tomsky, Daisy Brown’s Masha, and Laura Zigmantaite’s Governess particularly catching my ear
– without that reflecting negatively upon any of the other singers. It was the Opera Holland Park Chorus, though, which so often stole the show. Expertly
trained, not just musically but in its Russian too (insofar as I could tell!), by Philip Voldman, and responding well to detailed direction, choreography
(Jamie Neale) included, the chorus members performed equally well as individuals (highly impressive waiters, for instance, in the first scene) and
corporately. We shall doubtless see and hear more from many of them.

Ideally, we should have heard a larger orchestra than the Holland Park pit can accommodate. There were certainly times when the lack of a greater body of
strings detracted from Tchaikovsky’s Romanticism. However, there is a good deal of (neo-)Classicism to the score too; that often thrived under Peter
Robinson’s direction. The Mozart pastiche music – which, of course, never quite sounds like Mozart, but gives us a good idea of Tchaikovsky’s limited
understanding of Mozart – came off particularly well, but so did the obsessive qualities of the score. The City of London Sinfonia woodwind were on
particularly good form, and the strings performed creditably indeed, given their limitation in number. Opera Holland Park’s productions tend to evoke above
all a splendid sense of company, of an evening that is considerably more than the sum of its parts; this was no exception.