That’s Gioachino Rossini and Federico Fellini in Pesaro’s historic Teatro Rossini. Italian director Davide Livermore (that’s lee-vair-MOR-aye) unabashedly re-wrote Fellini’s Lo scieco bianco (The White Sheik) and 8 1/2 as Rossini’s Il Turco in Italia, or maybe it’s the other way around. All your favorite characters were present: the sheik himself, Guido (Marcello Mastroiani) as the film director, the whore Saraghina, the priest(s) and cardinal, the glamorous mistress(s), the bearded lady, the showgirls, and probably many more characters you and I may have forgotten since the 1960’s.
Rossini’s world became Fellini’s and Fellini’s world became Rossini’s. Prosdocimo’s play got written (with a lot of help from his actors), and Fellini’s film got made. Davide Livermore brought it all together adding the perfect physical comic schtick that matched up perfectly with the musical pace of Rossini’s masterpiece. And was funny to boot, sometimes really funny, like the mute Saraghina’s dominatrix relationship with the tenor priest Narciso. 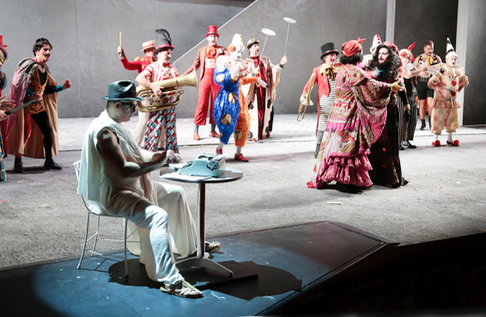 Paolo Spagnolo as Prosdocimo in Act I costume, Pietro Adaini as Albazar, Cecilia Molinari as Saida with members of the Chorus of the Teatro della Fortuna M. Agostini
Surprisingly all this was not too much, given that Rossini’s librettist Felice Romani had already complicated a really simple comic situation with an absurdist pre-Pirandello intuition, like the metatheatrical Six Charactors. Just as Fellini’s films are laden with images that abstractly create a real world that is imaginary so does Livermore’s opera, a world that we feel and understand but that would take volumes to define. Finally Livermore lays out Rossini’s mixture of error and truth in the same way as had Fellini.
Like some of the American film critics of the time (1963) opined the film 8 1/2 misses touching the heart or moving the spirit, that it’s structure is incomprehensible, and finally that it was a plain out fiasco. This of course can be said of Livermore’s masterful staging. It was far more an intellectual game than a honest rendering of comic and sentimental truths of Rossini’s opera.
Roman born, Juilliard trained opera coach turned conductor Speranza Scappucci was in the pit with the Filarmonica Gioachino Rossini. This brilliant young conductor provided the control needed to keep the bedlam on the stage comprehensible. It was solid music making, with the possibility of inspired music making far beyond what could be expected or even wanted. Her tempos were moderate, patter was measured, the Rossini “boil” or ‘buzz” was never fully achieved, and the unique Rossini joy of singing was absent. But the event was about Fellini, and it was spectacular.
The question looms — what was the understanding and pleasure of those (few) of later generations sitting in Teatro Rossini for whom Fellini films are not part of their general culture? 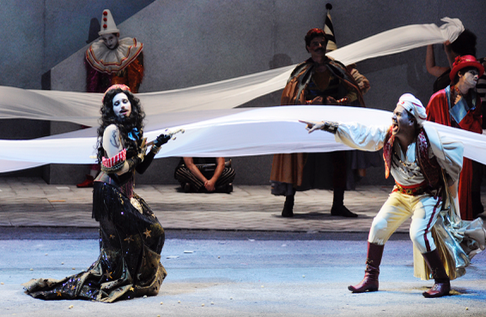 Erwin Schrott as Selim recognizing Cecilia Molinari as Zaida in Act I
The greatest charm of the evening was the sheik Selim, sung by Uruguay born, Italian trained baritone Erwin Schroit [FYI former partner of Anna Netrebko] who had no more to do than walk onto the stage to steal the show. He reinforced the physical mannerisms of Fellini’s White Sheik with powerful voice, simply making the world turn about him. This made it all the more fun for Prosdocimo to try to lay out his comedy, which veteran Italian baritone Pietro Spagnoli did with equal panache and volume, if not with such overwhelming charm.
The third anchor of the comedy was Narcisco sung by young American tenor RenÈ Barbera whose priestly presence was complicated by his masochistic relationship with Saraghina and his travestimento as the sheik for the masked ball. True blue chip casting held sway with Nicola Alaimo, Pesaro and Monaco’s William Tell as the cuckolded husband, Geronio, this artist’s famous girth bouncing lightly in a graceful tumble when kicked over by Fiorella.
Fiorella was impersonated to great effect by Russian soprano Olga Peretyatko, who like her portrayal of the same role at the 2014 Aix Festival succeeded as the character without assuming the stature of voice or technique to bring the role fully to life. Young Italian mezzo-soprano Cecilia Molinari, a participant in the Rossini Festival’s Accademia held her own as a bearded Zaida. Her side kick Albazar was sung by cross-dressed tenor Pietro Adaini who was wittily hauled off the stage during his aria by stagehands preparing the movie set for the finale.
Michael Milenski