The Tutino opera was said to be a co-production with Teatro Regio di Torino though there is no trace of it in upcoming Torino seasons. Dream of the Red Chamber is a co-production with the Hong Kong Arts Festival where it will be performed in English. It is said that if there are additional performances in China Mr. Sheng will re-cast it in Chinese, with the intriguing question of how this English language Gian Carlo Menotti-like theater piece will sound sung in Mandarin.
The Bright Sheng Dream of the Red Chamber is a very Chinese indeed, based on a famous Chinese novel of the same name by one Cao Xueqin of the 18th century Qing Dynasty, his novel considered one of the four pre-modern Chinese classics.
As it came down to those of us sitting in the War Memorial Opera House it is the story of a family who owes the emperor money. The debt can be repaid if the family scion will marry a rich heiress. He however prefers to write poetry with a pretty cousin. He has a dream sleeping in a red chamber in which the two young women appear, confusing him. 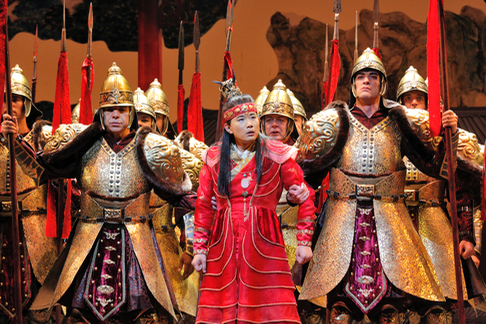 Yijie Shi as Bao Yu seized by imperial guards
San Francisco Opera’s publicity enthused that this is the Chinese equivalent of Romeo and Juliet, though it really is the equivalent of Richard Strauss’ Die Liebe der Danae, originally titled A Marriage of Convenience.
Unlike the motivic subtleties Richard Strauss exploits, Bright Sheng has based his musical story telling on the tunes of Chinese folk songs, and there are four or five of them that appear and then reappear, one in particular stood out sung to the words “A woman’s only chance for happiness is to marry well.”
Mr. Sheng’s style is middle-of-the-road, mid-last-century with strong moments of Stravinsky and Hindemith et al, though there is a strong dose of mid-range brass and jazz chords that adds a big-band feel from time to time. What makes his style unique are the lurid colors of the orchestration, glissandos and oriental intervals. Mr. Sheng is a very able composer, and of prolific invention when expanding his folk song material.
Most characteristic of his vocal lines was the leap of a major 7th to a high note, and there were high notes aplenty, delivered always forte to fortissimo.
Like musical comedy, Mr. Sheng and his famed Chinese-American co-librettist David Henry Hwang (Broadway’s M. Butterfly) set up situations and then sang songs about what had happened. There were lots and lots of songs. It is a very long opera. 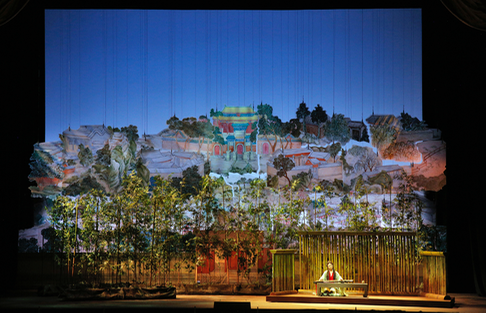 A scene from the opera
Like musical theater, the sets, designed by Tim Yip (the film Crouching Tiger, Hidden Dragon), were cloth drops that flew in and out and small wagons of set pieces that rolled on and off so that locations could quickly and easily be changed without breaking the pace of the opera’s musical theater song structure. Obviously there was much bright red color, and much richness in the imperial decor that threatened the debtor family. Mr. Yip, an Academy Award winning art director, supplied the costumes as well, of required 18th century Chinese dynastic splendor.
Of note in the large cast was tenor Yijie Shi who brought a fine level of operatic professionalism to his role as the family scion.
Michael Milenski