No echoes of spectacles like the al fresco productions beneath Egypt’s pyramids or Rome’s Baths of Caracalla. Nor of San Francisco’s famed jockstrap-less gay pride Aida, or an imagined specter of a new Zefferelli production recently dismissed by the Met. No echoes at all of the big singers that have always been called upon to evoke the monumental atmospheres commemorating global transformation.
Certainly not the 1981 San Francisco production starring Luciano Pavarotti, never-mind-the-name-of-the-opera [Aida]. If there is a star for this current production it is SFO protÈgÈ Leah Crocetto who offered a very sweetly sung Aida, and succeeded in projecting the beauties of the Italian language in an intimate “Ritorna vincitor” — though marred by a premature (surely unintended) drop of the hieroglyphically encrypted show scrim. 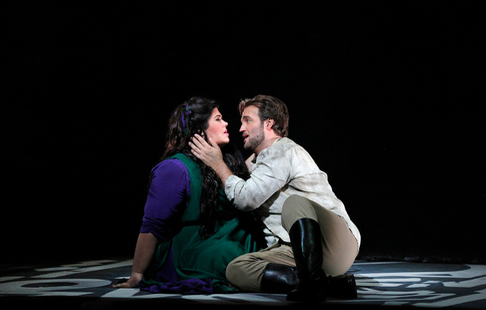 Leah Crocetto as Aida, Brian Jagde as Radames
Aida’s lover Radames was SFO protÈgÈ Brian Jagde. Once we arrived at the entombment of Aida and Radames Mr. Jagde’s knife-edged voice softened and we heard, finally and with welcome relief, a voice of a sweetness and warmth that matched that of Mlle. Crocetto’s Aida. Conductor Nicola Luisotti carefully sculpted this protracted scene into one of profound operatic intimacy. It was memorable.
Luisotti made this Verdi score all about atmospheres, pulling forth every possible musical nuance to be evoked by the flow of the Nile and the glow of the Egyptian night sky. There was innocent playfulness in the Moorish dance, and even in the eruption of violence when Radames surrendered and Aida and her father fled Luisotti sustained measured strokes. More often for Luisotti these days it was a reflective reading of the score rather than a flow of dramatic points. The maestro made exquisite music of this warhorse.
If high art emanated from the pit, low taste poured forth from the stage, and it was not unintended. Stage director Francesca Zambello has been turning out provocative productions of Aida over the decades. This edition adds the hieroglyphic inspired alphabet created by L.A. artist Retna (alias of Marquis Duriel Lewis) to her provocations. These symbols (said to actually say something — but only to Retna) covered the show curtain and the huge panels of the triumphal scene, and elsewhere. You may recall his cover art for Justin Bieber’s 2015 album “Purpose.” 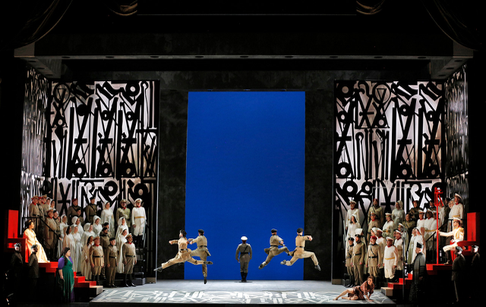 A moment in the Triumphal Scene
Zambello added as well eight dancing boys, and eight more boys who danced but were not trained dancers, two of whom were accomplished acrobats. When not dancing these groups of males sometimes marched across the back of the stage. Evidently the ritualized motions of these males were intended to illustrate religious statehood. Mme. Zambello used a related movement technique as well in her La vestale at ENO some years ago.
The choreography was created by Jessica Lang, a well-known name in institutional dance. She imagined complex, highly geometrical routines whenever possible but especially in the triumphal scene where there was no procession, instead a ballet in which the eight dancing boys chased and threw around a ballerina. Mmes. Lang and Zambello enforced a crescendo of visual razzle dazzle through which we barely felt the measured pace of the maestro’s triumphal march. It was tongue-in-cheek, camp and kitsch all at once. And sort of lovable.
Zambello updated the costumes to generic uniforms and religious robes of recent periods, and the program notes declared that the supertitles would say foreigners rather than Ethiopians or slaves. Mme. Zambello’s intended message that women were looked upon as possessions of men was perhaps apparent only to her, though the hijab-less ballerina was indeed tossed about quite a bit.
Things get serious in the third act and it was here that the singers seemed undirected, left to wander in a stage space absent of context. It was here that we felt to need of heroic singers to construct the political and dynastic catastrophe that Verdi creates musically, i.e. operatically. Aida does not play as a chamber opera of familial proportions cum triumphal scene, though this premise may have precipitated the role debuts of Mlle. Crocetto and Mr. Jagde.
With the exception of the Amonastro sung by baritone George Gagnidze and the Ramfis of Raymond Aceto, both seasoned, solid professionals additional casting was inexplicable. Precocious Adler Fellow bass Anthony Reed sang the King of Egypt who invites his daughter Amneris to award Radames the triumphal crown. The supertitles were not modified to indicate the obvious — that this Amneris was twice the age of the young king and was thus his mother! Amneris, sung by Russian mezzo Ekaterina Semenchuk, found appropriate colors in her upper voice but otherwise melted into the scenery.
Michael Milenski