When first produced in 1782 in Vienna, Wolfgang Amadeus Mozart’s singspiel, The Abduction from the Seraglio, was as popular as New York City’s current hit show, Hamilton. On January 28, 2017, Los Angeles Opera premiered James Robinson’s nineteen twenties production of the Mozart singspiel that places the story on the Orient Express. Since Abduction is a work with spoken dialogue like The Magic Flute, the cast sang their music in German and spoke their lines in English. There were English titles for the musical numbers but not for the dialogue. Allen Moyer’s set consisted of two cars and the vestibule that connected them. At the back of the set was the row of windows normally found on a train and beyond them the scenery flew by as the train sped from one city to another. 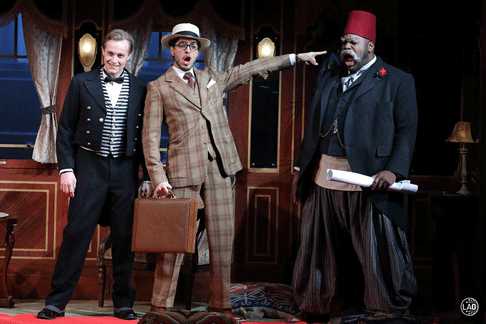 Brenton Ryan as Pedrillo, Joel Prieto as Belmonte and Morris Robinson as Osmin

Like The Magic Flute, Abduction demands extraordinarily talented singers. The leading soprano, Konstanze, has to encompass an enormous range that includes trills, triplets, and dramatic declamation such as one hears from Fiordiligi in Cosi fan Tutte. British soprano Sally Matthews had all the vocal goods and displayed them in magnificent style on Saturday evening.

Puerto Rican tenor Joel Prieto sang the role of her lover, Belmonte, with oboe-like tones that always seemed to come from the exact center of the note. The part of Osmin, the riotously funny Turkish overseer, requires a bass who can sing the lowest possible notes. Morris Robinson, a veteran Sarastro, sang some of the lowest notes ever heard on the opera stage with style and grace. 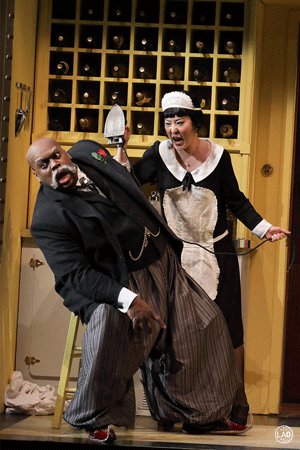 So Young Park was a brunette “Blondie.” Perhaps the art of bleaching had not yet reached Istanbul. Park’s comic timing was right on cue and her well focused sweet tones carried well in the auditorium. Brenton Ryan as her lover, Pedrillo, showed signs of having been beaten into submission by Osmin and his thugs, but he sang his tuneful aria with abandon.

The crucial role of the Pasha who eventually releases the two couples is reserved for an actor. Tall and athletic looking Hamish Linklatter spoke these lines: “Nothing is as ugly as vengeance, whereas the quality of great souls is to be humanely kind and forgive without selfishness.” With this speech, he sent Belmonte back to his father, the man who had robbed the Pasha of his property in Spain.

Music Director James Conlon not only conducted the performance but also gave the pre-curtain lecture for this seldom-performed Mozart gem. A show of hands in the lecture hall told me that a large majority of the audience had never seen Abduction before, so this well-cast, interesting production did a great deal for the future of the opera. Conlon led the performance with propulsive tempi that never lagged and presented Robinson’s comedy at a brisk pace. The Abduction from the Seraglio is a fascinating show and opera lovers in the Los Angeles area should not miss it.